How Do You Mourn Glaciers? 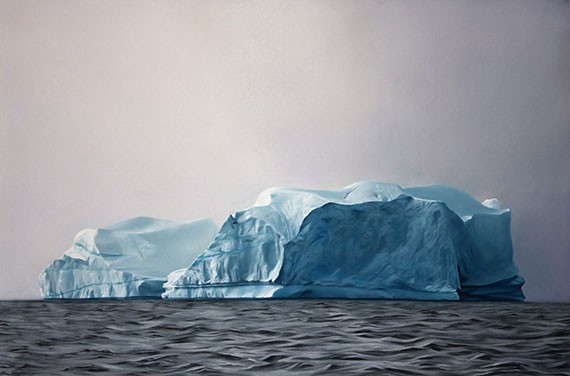 In response to the accelerating disappearance of arctic glaciers, artists have taken to making replacements. These sculptures, paintings, drawings, and photographs are an effort to steady the glacier population of the world, even if more and more of them have to be fake.

Zaria Forman is the latest practitioner, a 31-year-old living in Brooklyn who is highly talented at conjuring mesmeric scenes of turbulent water and sky in pastels. In pastel drawing, you hold the sticks and shards of color in your fingers; it's a process that looks like finger painting, but Forman's results are fastidiously precise. For the last nine months, she's been making a series of large, majestic drawings of arctic glaciers and waves crashing on the coasts of the Maldives, the tiny, low-lying Asian island country that's particularly vulnerable to rising sea levels—a canary in the climate-change coal mine.

From even a little distance, Forman's drawings look like dramatic, high-contrast photographs of tempestuous water and sweaty mountains of ice the colors of blue slushy and gleaming-white toothpaste. It is not surprising that these romantic spectacles are flying off the walls into collectors' homes. Ice is the new vanishing race.

Thirteen of Forman's drawings are at Winston Wächter Fine Art. The largest is 45 by 75 inches, and though this is the first time the group has been exhibited live, the pictures are internet sensations. All but two pre-sold before last week's opening. By contrast, red dots did not appear next to the sepia-toned photographs of remote locations taken by Zaria's mother, Rena Bass Forman, also on display in the gallery, or the ottoman-sized silver-and-white abstract sculptures sitting on the floor, made by Seattle artist Julie Speidel. Speidel based her crystalline rock forms on the so-called erratic boulders created when glaciers recede. Speidel's sculptures are irregular but simple: paradoxical in an apt way for the mourning of something we're killing with our living. Rena's photographs of glaciers show veins of ugly dirt that her daughter's do not.

Speidel is the daughter of an oceanographer; Zaria's mother, Rena, was the inspiration for her Greenland drawings. Rena, an established landscape photographer, planned to charter a boat up the coast of Greenland. She drew up plans and ideas. But she was diagnosed with a brain tumor that killed her in 2011. Soldiering on, her daughter picked up the reins of the expedition. There are several kinds of mourning here.

The 2012 voyage was paid for by an $11,000 Kickstarter campaign that blew past its goal and raised $18,000. Other artists went along, too, to be fed by the vanishing in order to make a respectable stand-in later. Just before the world without us, there's the world of art, I guess.

On the day of the opening, I fixed on one of Forman's drawings. It's called Greenland #68. For almost four feet across and three feet high, everything is still and sunny. There's an ominous, pretty glare on blue water the texture of barely wavy hair, and a little bit left of center there's a fragment of floating ice. It's a remnant, and these are its last moments. It's ridged and pure white, a ringer for a human rib cage. Or it was a ringer for a human rib cage. While the frozen torso was fading into the sea, it was rising onto a piece of faraway paper for show during a melty summer. That distressing drawing was unsold.

Spend a Snow Day with The Last Angel of History