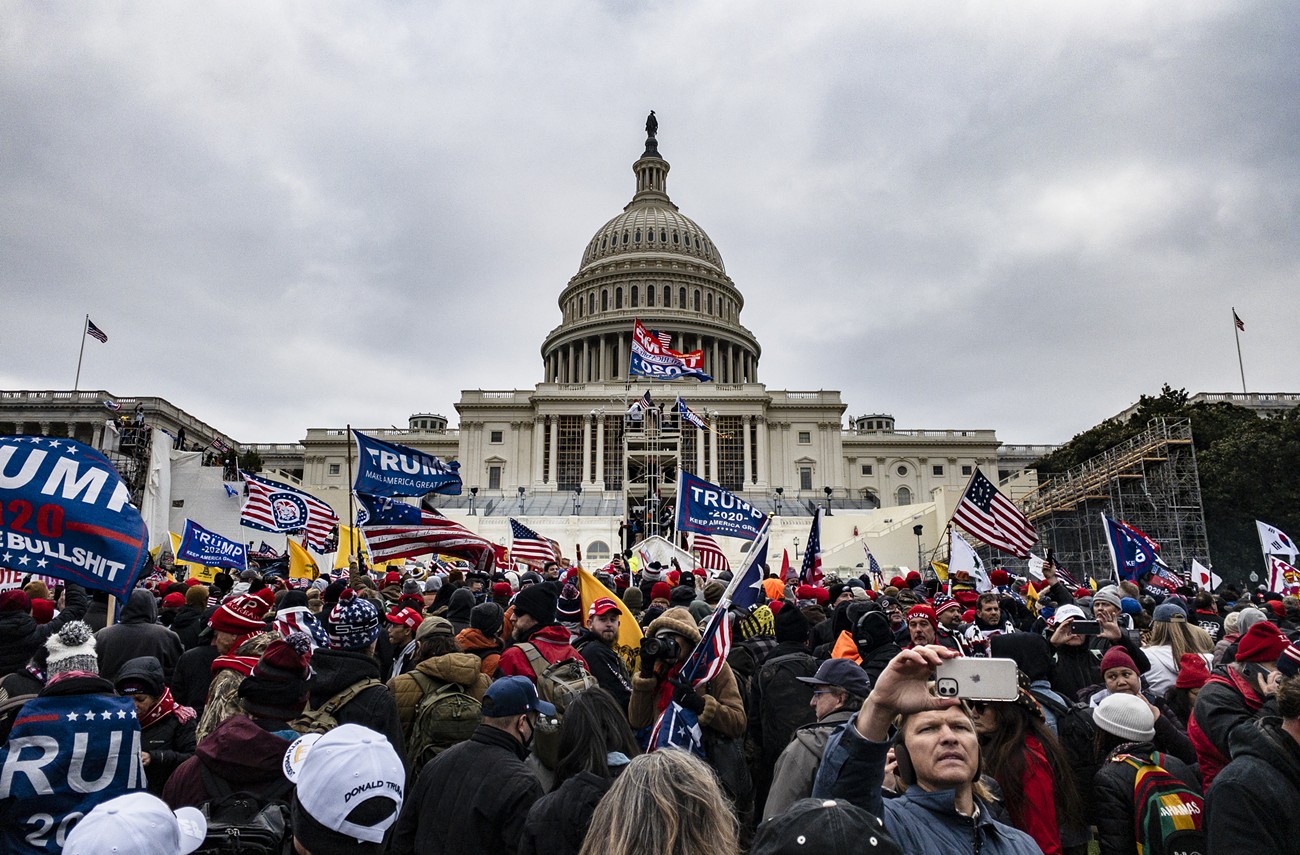 Plus, the House select committee on the January 6 storming of the Capitol will hold its first public hearing this week. Samuel Corum/Getty

Three cheers for the baby salmon! The 2020 removal of a causeway in Indian Island's Kilisut Harbor has reopened a fish passage, leading to a jump in juvenile salmon in the tidelands, reports KOMO. Five years before the bridge opened, only six juvenile salmon were found. But this year volunteers caught almost 1,000. "We weren't expecting these results so quickly," Bill Kalina, Indian Island's environmental program manager, told the news outlet.

Jesus H. Christ: Pierce County Sheriff Ed Troyer has been ordered to stay 1,000 feet away from Sedrick Altheimer, a Black newspaper carrier who is currently suing Troyer and Pierce County over a confrontation in January 2021 for "unlawful harassment." More from Jim Brunner at the Seattle Times:

"In issuing the ruling Monday, Pierce County District Court Pro Tem Judge Christine Chin cited 'a course of conduct of unlawful harassment,' referring to multiple incidents in recent months in which Altheimer said Troyer followed him in his unmarked SUV, circling around and flashing his lights as he delivered newspapers in Tacoma."

Speaking of cops: Three Arizona cops were placed on leave after watching an unsheltered man drown in the Tempe Town Lake last month, reports the BBC. The recently released bodycam footage records one of the cops telling the man, "I'm not jumping in after you." Protect and serve, amirite?

"I feel earth move under my feet..." A teensy, weensy 2.8 magnitude earthquake shook southwest Washington last night just before 7 pm, reports KOMO. According to the U.S. Geological Survey, the 'quake had a depth of ~2.3 miles and hit Fern Prairie, WA in Clark County. Nothing was damaged, but if you felt it, why don't you help some scientists out.

Did you just feel this M2.8 earthquake east of Vancouver, WA? https://t.co/cq9mnQXAXH Please fill out a Did You Feel It? report here: https://t.co/qFWFZsZWhq pic.twitter.com/ycG9qwzKNu

In other earthquake news: A new study in Earth-Science Reviews found that a tsunami triggered by a 9.0 earthquake along the Pacific Northwest's Cascadia fault line could be even more massive thanks to something called "the outer wedge." Isn't the danger kinda sexy?

Five Proud Boy members charged with "seditious conspiracy" for their part in the January 6 storming of the Capitol: Among those charged is Henry "Enrique" Tarrio, the former chairman of the far-right group, as well as Ethan Nordean, who lives near Auburn. According to the New York Times, the men had already been charged in March with "conspiring to obstruct the certification of the 2020 president election."

And later this week: The House select committee investigating the U.S. Capitol attack will hold its first of six public hearings during PRIMETIME on June 9 at 8 pm EST/5 pm PST. The hearings will supposedly include new information, video clips from that violent day, and "some of the roughly 1,000 interviews the committee has conducted behind closed doors." Dems are hoping this will help turn around what's shaping up to be a midterm slaughter, but I'm not holding my breath!

No takesies-backsies: Elon Musk is trying to worm his way out of spending $44 billion on Twitter by threatening to walk away from the deal over bot and fake accounts on the platform. Axios says that Tesla's shares are worth a whole lot less today than when Musk bid on Twitter, meaning the CEO is "overpaying for the company, with money he is going to have difficulty finding." Twitter is having none of the billionaire's BS, and in a statement said they "intended to close the transaction and enforce the merger agreement at the agreed price and terms." I'm popping popcorn!

Lots of sunshine to start the day but some patchy fog. Chilly with highs in the mid to upper 40s. Increasing clouds this afternoon. Chance of rain beginning around sunset. Warm. Highs in the upper 60s to mid 70s. #k5weather pic.twitter.com/e4HBf3jfID

It's seal pupping season in Puget Sound, meaning keep your damn dog at home if you plan on enjoying any of the Seattle Park beaches in West Seattle. These tiny lil' seal pups are vulnerable, protected by federal law, and likely to appear anytime between now and September. If you spot any pups on the beach, steer clear of them and call the Seal Sitters Hotline at 206-905-7325.

A big round of layoffs at Funko: The Everett-based company plans to layoff 258 workers in Everett and Puyallup starting on Thursday, reports KING 5. According to a Funko spokesperson, the company is consolidating its four Washington warehouses to one 958,000-square-foot location in Buckeye, Arizona.

New deputy director for art at Seattle Art Museum: After an "extensive international search," José Carlos Diaz will officially fill the position in July, where he will direct the museum's artistic program and lead eight curators in exhibitions, collections, publications, and libraries. He succeeds the wonderful Chiyo Ishikawa in the role, who retired in 2020 after three decades at SAM. According to a museum press release, Diaz is a "specialist in contemporary art" and is coming to Seattle from Pittsburgh, where he's currently serving as chief curator at The Andy Warhol Museum. SAM's CEO and director Amada Cruz called Diaz a "visionary scholar and leader" whose hiring represents "a huge moment for SAM, as we continue to navigate an ongoing pandemic and look to a brighter future." Welcome, José!

Something to consider: The shower reuben would probably go really great with a shower beer.

Happy Pride: But not to you, U.S. Marines.

For your listening pleasure: It's my birthday, so enjoy Mood Killer's "Happy Birthday (JACKIE EXTREME Remix)." 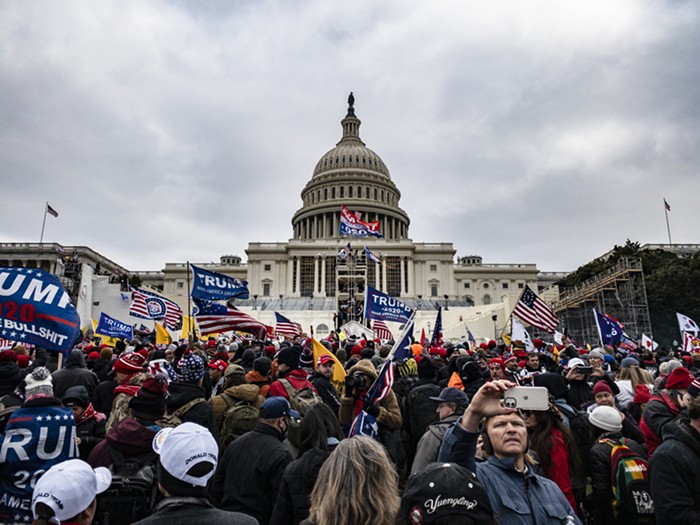 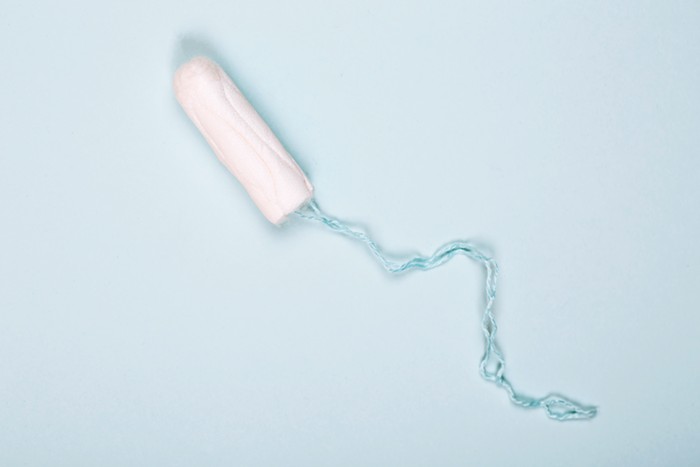