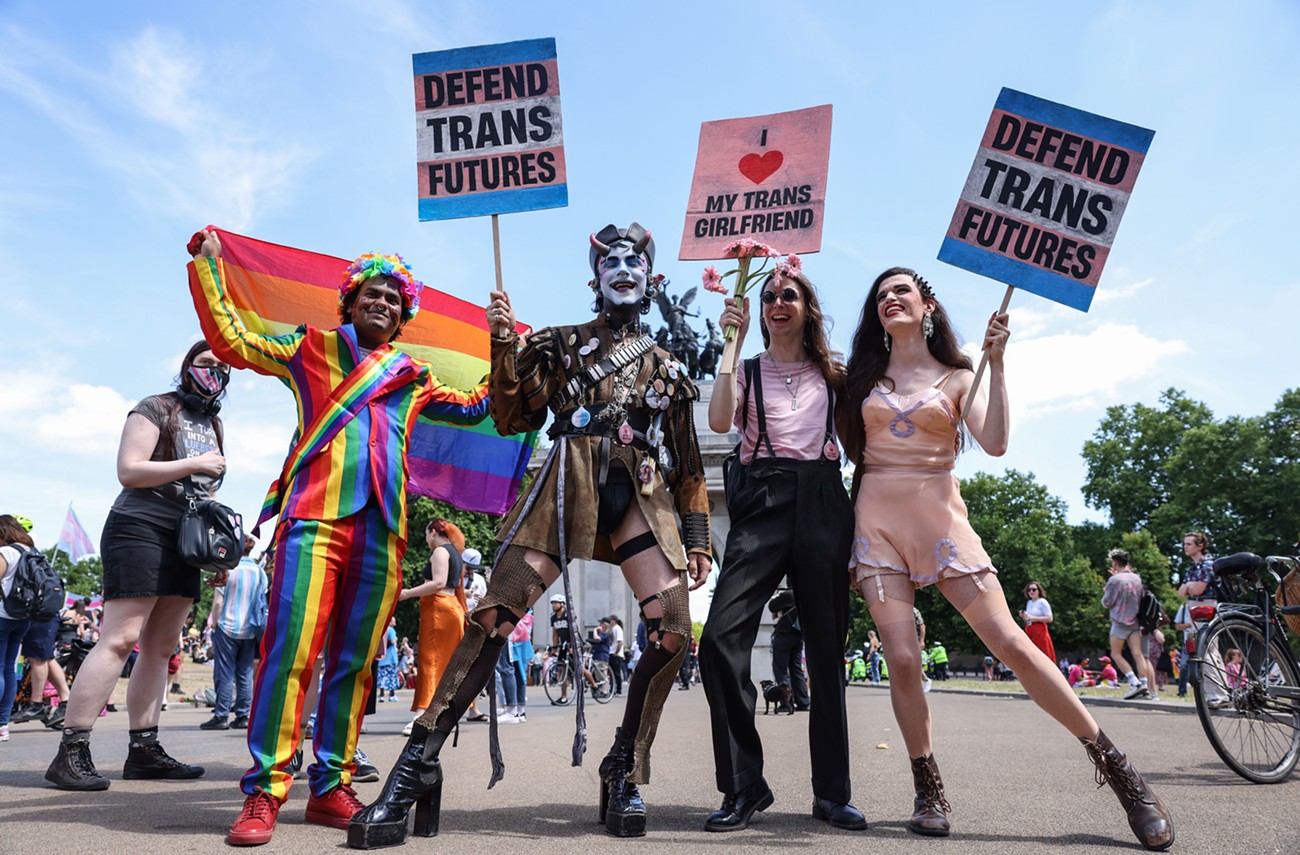 Trans Pride in London was this weekend (ours is in early September). Hollie Adams / Getty Images Stringer

Who killed Brett Rosenau? Cops in Albuquerque were chasing a suspect last week named Qiaunt Kelley who, in the course of the chase, ran into a nearby home. For reasons that haven’t been established, a 15-year-old named Brett Rosenau went into the house with him – it’s unclear if they had any connection to the house – and refused to leave. Cops fired some kind of stun weapon into the home, which caught on fire; Kelley made it out, but Rosenau died. This weekend, the city confirmed that the cause of death was smoke inhalation.

Seattle's former police chief to testify in Auburn police violence trial. Jim Pugel, once seen leading Seattle Police, will be a "key witness" in a trial against Auburn officer Jeffrey Nelson for repeatedly using extreme force. Nelson killed a man in 2019 after a pattern of what Pugel says was "unnecessary" physical confrontations over the years.

No thanks, Joe. A new poll shows that 64% of Democratic voters want someone other than Joe Biden to run for President in 2024. Only 26% say he should be re-nominated. Rough news for Democrats! Meanwhile, Pete Buttigieg has been more than usually busy lately — what could it possibly mean?

This is a perfect answer by Secretary Buttigieg. pic.twitter.com/SOgNByAwqk

Not enough Ls in the world to LOL hard enough at Elon’s Twitter woes. Musk no longer wants to buy Twitter, but he might have to. He’s got a variety of reasons for wanting to back out – personally, I suspect he just got bored – but the company is going to try to hold him to his word. Finally, Twitter has found a way to make a profit.

Hey, isn’t that … I can’t imagine you’re likely to see any of them wandering around Ballard, but if you’re in DC and you happen to see one of the Supreme Court justices who believe that pregnant people shouldn’t be in charge of their own bodies, there might be some cash in it for you.

DC Service Industry Workers... If you see Kavanaugh, Alito, Thomas, Gorsuch, Coney Barrett or Roberts DM us with the details!

We'll venmo you $50 for a confirmed sighting and $200 if they're still there 30 mins after your message. https://t.co/xXWZ5JZiE7

Here come the summer fires. Big areas of California are on fire, as is the tradition, with flames threatening sequoias and plumes of smoke choking out national parks. Here in Washington, wildfires have not gotten too bad yet – there’s only a few, and air quality remains good. Still, it’s a good time to make sure you have air filters and respirators at the ready.

Well, that’s peachy. Washington will buy around $3 million worth of produce from farmers belonging to underserved communities and then distribute the food to other underserved communities as part of a $400 million federal program. You may recall that one of the reasons that the new gardens were established in Cal Anderson Park during the BLM protests in 2020 was to bring awareness to the disenfranchisement of Black farmers.

You can get anything at Costco – well, almost anything. Following the Supreme Court’s ruling on access to reproductive care, many Seattle employers affirmed their commitment to keeping abortion (and other care) available. Costco is one of the few that did not.

Have you seen this goo? WHAT is going on here.

Uber’s been a little naughty. A leak of 124,000 internal documents shows that Uber was willing to go to great lengths to install itself in other countries – including breaking the law, according to one executive who wrote, “we’re just fucking illegal.” Meanwhile, the company’s then-CEO, responding to worries about violent protests, wrote, “violence guarantee[s] success.” I wonder if Uber’s lawyers bill for the many hours they must spend screaming into pillows.

Parking's getting a tiny bit pricier. The city tweaked the cost of on-street parking in 48 different locations, raising it in some places and lowering it in others. As of today, you'll pay somewhere between a couple quarters to $2.50 to store a car on public property, which is definitely the best possible use of that space.

Remarkable accuracy. I had to get an MRI last week (I’m fine) and the resulting image seems to be spelling out some sort of message. Who could have guessed that the human body gives up its secrets so easily?

Brain update: I'm ok! Doctor says my dizziness is probably caused by muscle inflammation, which bolsters the previous diagnosis that I "sit funny." I seem to be getting better with stretches & heat, no further brain-poking necessary. Thanks for all the well wishes!!! <3 https://t.co/xFWStqvxq5

Two more pennies, please. Forever stamps have just gone up in price from 58 cents to 60 cents, making stamp collecting a vastly more profitable investment than NFTs ever were. Side note: Somehow Trump pal Louis DeJoy is still in charge of the USPS. Wasn’t someone supposed to get rid of him by this point???