Budget season, baby! If you keep up with every word I put into the universe, you know what I’ve been up to this week. The Seattle City Council has spent the last two days proposing amendments to Mayor Bruce Harrell’s budget. Check out this rundown of the changes the members proposed on Tuesday and expect another update summarizing yesterday very soon. Basically, start refreshing the homepage at noon and check to see I’m still alive if the story is not up by 3 pm.

What’s happening today though? I’m glad you asked! Today is the third day of proposing changes to the budget. If you plan to tune into the discussion starting at 9:30 am, watch for Council Member and Budget Chair Teresa Mosqueda’s two big amendments. One amendment will deal with Parking Enforcement Officers, which the Mayor wants to re-absorb into the Seattle Police Department after the council took them out in a feeble attempt to “defund.” The other amendment will reverse Harrell's pay cuts to human service providers by adding money to the Human Service Department. That way the department can pay its workers enough to match inflation per City law. I’ll keep you in the loop, of course.

Weather break! Here's the weather for Thursday (I know it says tomorrow, but that's because the Tweet's from Wednesday)

Highs will top out near 60 tomorrow ahead of a strong front which will bring plenty of rain tomorrow night.

Daylight hours should be mostly dry—but windy too. 🍁

SPU discrimination: Earlier this year, the students of Seattle Pacific University drew attention to the school's homophobic policies (which prohibit employees from having gay sex wtf) with a long sit-in. Since then, the university and Attorney General Bob Ferguson have been beefing. Ferguson sent a letter to the university to ask some “basic” questions and the school got ansty, filing a federal lawsuit in an attempt to block Ferguson’s office from investigating its weirdo hiring rules. In August, Ferguson filed a motion to dismiss SPU’s lawsuit. Yesterday, a judge granted Ferguson’s motion, ruling that SPU had asked the feds to do something it could not do. So, the investigation will continue. Big for anyone who cares about queer people and worker’s rights.

Trouble on the task force: State House Rep. Melanie Morgan (D-Parkland) got accused of derailing the state’s social equity cannabis task force. An independent investigation found she tried to “silence BIPOC business owners,” KING 5 reports by ordering an end to a chat box that community members used to communicate with task force members who were trying to address racial disparity in the cannabis industry due to the war on drugs. She called the chat box a “distraction,” but task force members saw her move as an attempt to silence members of the public. Morgan said she’s filing an appeal and called the report "misleading” and "politically motivated.”

Meta busted: A Washington state judge slapped Meta with what could be the largest campaign finance penalty in U.S. history. The judge did not go easy on the Facebook parent company, fining it nearly $25 million, which counts as the highest penalty the judge could give in response to the company’s 800 intentional violations of Washington's Fair Campaign Practices Act. KOMO has more.

I hate this motherfucker: Elon Musk, who is literally what an AI would generate if you asked it to make the most insufferable man possible, did something annoying. Again. He literally just carried around a fucking bathroom sink at Twitter headquarters. Not to weaponize womanhood, but I wish Elon Musk was a woman, so when he did dumb shit like that the internet would make fun of him more severely. But then again, I know few women who would be so cringe. Still, I would really like to see him knocked down a peg. Anyway, he’s probably going to close a deal to buy the bird app this week. For real this time, allegedly.

It matters, actually: The Washington Post sounds the alarm that if Musk buys Twitter, it's unclear how he might change policies around disinformation. As we near the midterms, some wonder how a Musk Twitter will influence election results. He probably won't have time to implement any weird free-speech absolutism in time to change voters' minds for this November, but just the sheer "shakeup" could hurt the platform's ability to manage disinformation.

Thanks, Obama: The Democrats have not changed their strategy since fucking 2008. With just over a week until the midterm elections, the blue-no-matter-who crowd is sending in their toughest soldier, former U.S. President Barack Obama, to rally the troops. Sounds very exciting to young voters 🙃. I hope Obama and Biden take a BeReal at the ballot box. That would get me pumped for civic engagement.

Who wants to be a millionaire: No one won the Powerball last night, so you still have a chance to win $800 million in the next drawing on Saturday. I hope you all win. I want the universe to validate your delusion.

Harry’s memoir: Prince Harry announced the title and cover of his upcoming memoir, “Spare.” I’m a huge fan of celebrity memoirs. I’ve read good ones and bad ones and, based purely on vibes, I’m prepared for this one to be about the level of one of Ellen DeGeneres's surface-level put-my-face-on-a-book-and-call-it-a-memoir books. I mean, the man went on a vague “my family, THE colonizers, are racist” media tour without dropping any names. Boo. But hey! I don’t wanna be too negative. Maybe now that his Grandma is dead we will get a true tell-all like Jenette McCurdy’s “I’m Glad that My Mom Died.”

Could be cool, just saying:

In the company's 85-year history of making movies, plus-size characters have only ever featured in the roles of villain's or extras pic.twitter.com/Z1rVBHP6NZ

Justice for Mahsa Amini: In observance of the 40 days since the highly suspicious death of Mahsa Amini, an important marker in Iranian and Islamic grieving traditions, protesters visited the 22-year-old's grave in her hometown. Read the full story from CNN.

Russia: As Russia continues to attack Ukraine with missile strikes, Russian officials threatened Ukraine-sympathizing countries, saying that if the US or its allies gets involved in the war, Russia will target US commercial satellites.

What’s the move for Halloween: Am I the only one who is starting to get anxious that I have a (super cool) costume and no set plans for Halloween this weekend? It may not be the high-energy, Instagram-worthy night I and other baddies had in mind, but maybe I’ll hit up the most haunted bar in the City. You don’t even have to bring any friends! The ghosts will keep you company.

I went to this dude’s concert last night: 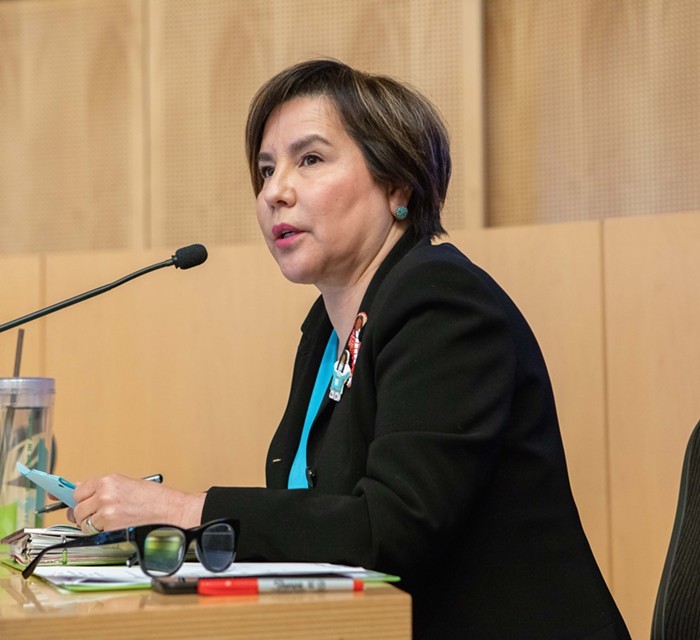