When I was captioning the above photograph, I wasn't sure whether to credit the artist as Alyse Emdur.

Emdur is the artist who gathered and commissioned hundreds of photographs taken in prisons like this one. So in many ways, she is the artist, period. (They're compiled in a book.)

She's also an artist by training, and she was inspired to do this project when she came across a photograph of her 5-year-old self with her incarcerated brother. She wondered why they were posing in front of a tropical beach scene.

And then she discovered that there are hundreds of cheery, bright murals in prison visiting rooms, and that these fantasy scene serve multiple purposes for the prisons, the people who are locked up, and their families.

For instance, look at Antoine Ealy, above. In his self-portrait, he may wear the uniform of a prisoner, but he poses like a model. He has an audience: maybe someone he knows, maybe someone he wishes for, certainly himself, too.

Ealy is the artist, Emdur is the artist—and the prison makes its contribution as well, giving its tacit stamp of approval by providing the backdrop. What's in it for the prison? These backdrops reinforce the outside world's denial of the realities inside a prison. The camera trains on backdrops, not doors, bars, alarms, guards. Back at home, it may look like the mother, father, sister, or brother in prison is actually just on vacation.

There is a vanishing aspect to prison life, because virtually no cameras are allowed inside adult prisons.

On his blog Prison Photography, Pete Brook has written that photographs taken in prison waiting rooms are almost always taken using a Polaroid camera. With a Polaroid, there is no trace of the image. No digital file, no film negative.

Haunting details about vision and prison are embedded in each of the works of art in Prison Obscura, a group exhibition that's at Evergreen State College through March 2. Brook organized the exhibition and it has traveled across the nation; its final stop runs from April 1 to May 28 in Portland, Oregon, at Newspace Center for Photography.

Two weeks ago, I took eight buses to see Prison Obscura—four buses to get down to Olympia from Seattle and four to get back, during which I had plenty of time to savor my freedom and mobility. I emerged extremely grateful to Brook, the artists, and the prisoners who share their stories and pictures in order to provide a glimpse at the most enormous American underground that has ever existed. Get there in whatever way you can. 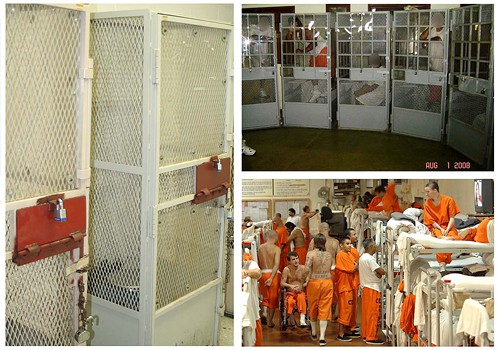 Prison Obscura is meant to be a powerful experience, but also an engine for change.

Photographs, postcards, videos, and data animations represent a type of portraiture that's collaborative, active, ongoing. This is not documentary voyeurism.

In Mark Strandquist's ongoing project Windows From Prison,he asks, "If you could have a window in your cell, what place from your past would it look out to?"

When a prisoner answers the question, Strandquist or a collaborator—anyone can volunteer, meaning you can do this yourself—goes and takes the picture the prisoner has envisioned and described.

The prisoner gets a copy of the photograph, and the pictures are also blown up and used on banners in prison-reform advocacy. Each prisoner also writes a text about the chosen place, and in the gallery, the photographs and texts are displayed together. The texts are on postcards to take away, to take home as reminders.

The Montana photographer Kristen S. Wilkins created a similar project with women. She grew tired of seeing female prisoners pictured only through their mug shots printed in newspapers. So Wilkins spent two years working with prisoners to create a series of portraits paired with landscapes called Supplication.

Each woman would tell Wilkins a place that she missed. Wilkins went to the places and brought back pictures. She also took full-length portraits of the women in their prison environment, set with the props and in the poses of their choosing.

"Grand Ave. by Shiloh (Cemetery). Left side of water fountain. Has colorful wreath with flowers. It is were my son is @. He is the best thing that happened to me in my life. He was my world."

The point in all of these works is not exoneration. Judgment is off the table. The point is human complexity.

Take a Picture, Tell a Story by Robert Gumpert is a series of black-and-white photographs taken in the San Francisco County prison. Gumpert offered four portraits to any prisoner willing also to tell stories, into a microphone, uncensored. The stories could be about anything.

While the audio plays, the photographs sit unmoving.

There is no typical story or typical prisoner. Some stories are personal, some are jokes. The photographs would yield so little without the audio.

Olympia artist Steve Davis managed to get pinhole cameras into the hands of youths in local juvenile detention centers. For legal reasons, the girls' faces weren't allowed to be shown, so their pictures are poignantly blurry. The boys pose and posture.

According to Brook, with few exceptions, cameras have not made their way into American adult prison art programs. Dance, performance, music, and writing, yes—but not imaging.

That's partly why many of these pictures are so powerful: they simply capture what is unseen. One of the reasons the prison industry is so difficult to see is that it's so unbelievably large, and geographically remote.

Josh Begley wrote code that projects Google aerial satellite views of every carceral facility in the U.S. Most creepily, I couldn't make out anything but forest and hills in some of the aerials. The prisons are hiding in the trees. See for yourself; Begley's database is searchable in the gallery or online.

Paul Rucker, a formerly Seattle-based artist who has been making his mark in Baltimore, created another data animation, this time a map of the United States. As music plays, the map fills up with green, then yellow, then orange, then red dots.

Each dot represents the building of a prison, and the animation covers 250 years of American history. The dots go faster and faster until their speed explodes in the red, contemporary period. By the end, the nation looks like a collision course of ambulances flashing their red lights.

The point of Prison Obscura does not seem to be prison abolition. Rather, the artists are depicting the specificity of the particularly egregious American system, which is racist, excessive, and torturous, locking away into overcrowded and underfunded cages millions of people, many nonviolent offenders, serious addicts, and people with mental illness.

One powerful wall is entirely plastered with exhibits from the court case that in 2011 finally demanded that California lower its prison population. The only reason these images are widely accessible is that the law firm that fought the case, Rose, Bien, Galvan & Grunfeld (+ the Prison Law Office), put them online. Pictures of prison are lucky to get free.

After June, Prison Obscura's tour, supported by Haverford College, will be over. It should be remembered that this exhibition was not the work of a museum or gallery. (For an example of that, see here.) No, Prison Obscura was the work of individual, dedicated artists working mostly outside the art system, and a massively determined and effective curator. Rather than being tied to biennials and fairs, Prison Obscura is part of a rising national tide that ties together prison reform, Black Lives Matter, the rights of women and children, economic and racial equity, and portraiture that works toward representational justice. More, please. 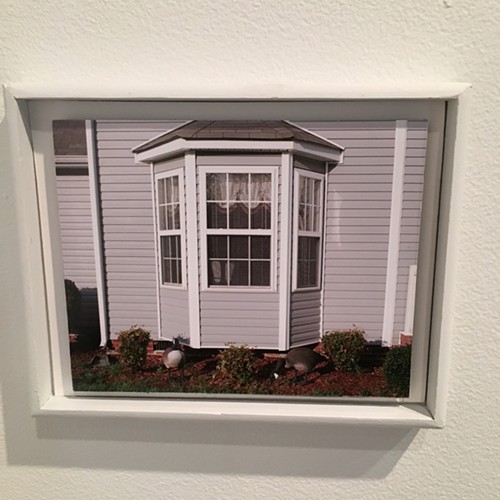 This is one prisoner's response to the question, "If you could have a window in your cell, what place from your past would it look out to?" JG 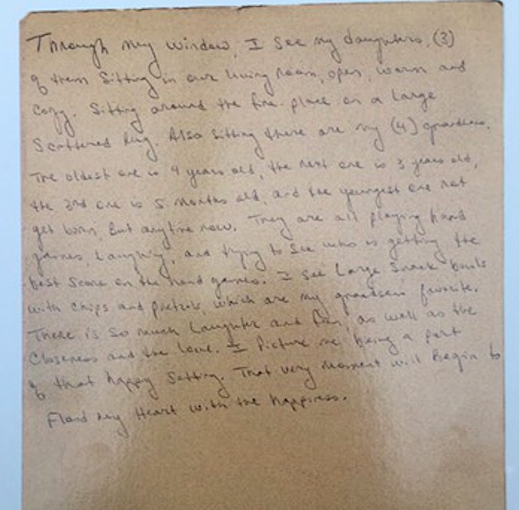 This is the same prisoner's text about what is in the photo above. This letter is printed on postcards to take home from Prison Obscura along with postcards from several other prisoners about their wished-for window views. 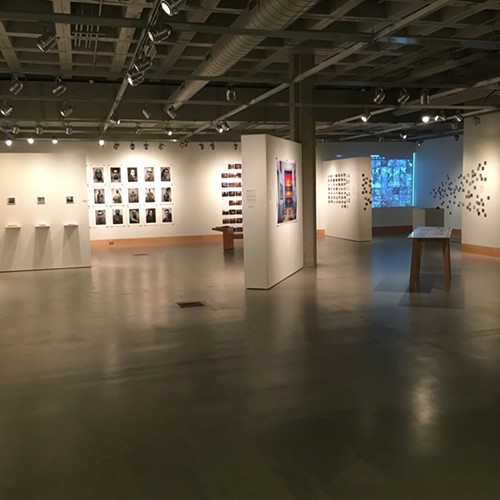 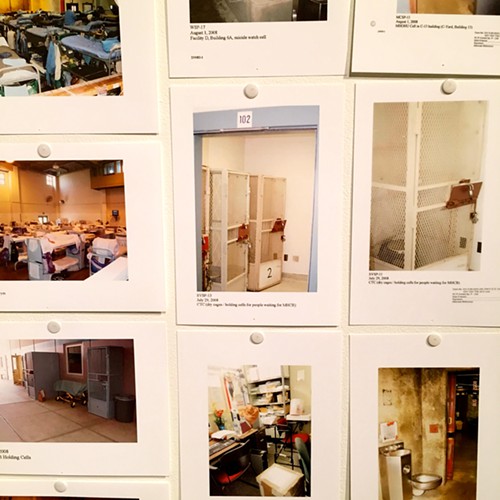 These photographs, tacked to the gallery wall, were evidence in the class-action lawsuit brought by prisoners against the state of California. JG
The Stranger depends on your continuing support to provide articles like this one. In return, we pledge our ongoing commitment to truthful, progressive journalism and serving our community. So if you’re able, please consider a small recurring contribution. Thank you—you are appreciated!
CONTRIBUTE NOW