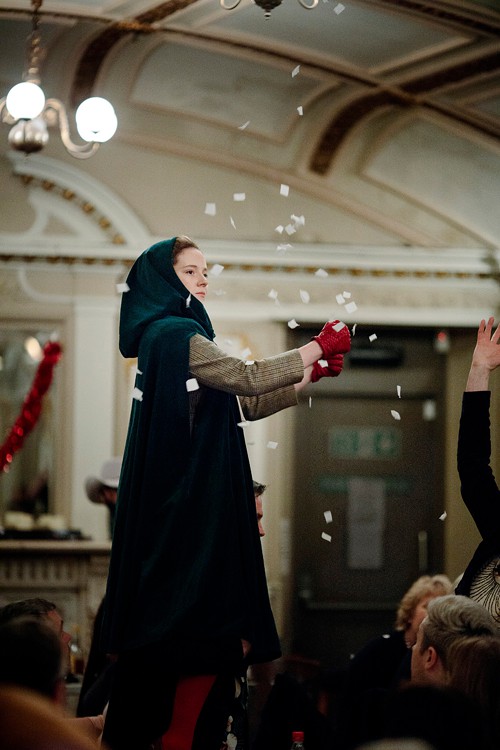 The National Theatre of Scotland is coming through town with an immersive shindig of a show called The Strange Undoing of Prudencia Hart, which opens Thursday. Created by playwright David Greig and directed by Wils Wilson, the play's based on and propelled by the Border Ballads, traditional poems written near the border of England and Scotland. Folk musicians Alasdair Macrae and Annie Grace play alongside other actors as they tell and sing and dance the tale of Prudencia, an academic who winds up living her own border ballad en route to a Scottish folk song conference. The production takes the form of a ceilidh at a lock-in, wherein audience members sit around a pub or other drinking establishment and watch a dramatic and musical performance take shape in front of them.

I talked with Wilson about what the hell a "ceilidh at a lock-in" is, Border Ballads, Scottish devilry, and doing shows in bars.

Prudencia is described as a "lock-in”—what is a lock-in?

I don’t know what the licensing laws are like in Seattle, but in the UK the pubs have to close at 11pm and everyone gets ejected into the (invariably cold) night. One way of getting around this without actually breaking the law is for the landlord to lock the doors, close the curtains, and declare that he or she is having a 'lock-in' or private party. If you are in Scotland, this is often when the malt whisky bottles come down from the top shelves. Fiddles, whistles, and other instruments come out and a folk session or traditional ceilidh gets underway. It’s a very particular atmosphere—songs are sung, stories are told, and people are taken out of their ordinary lives for a while.

There’s been a trend in Seattle of doing theater in “non-traditional spaces,” basically anywhere outside a designated theater house. Does a lock-in fall into that category? Does that sort of thing happen a lot in Scottish theater?

David and I had talked for a long time about making a show inspired by the Scottish ceilidh—creating that atmosphere of conviviality, out of which a story could suddenly spring.

There seems to be lots of ballad singing in this show.

The Border Ballads have many traditional tunes associated with them, and some of these appear in the play. There is original music, too, by Alasdair Macrae, and some more contemporary tunes. We loved the idea that karaoke is a kind of modern folk culture—in its way just as authentic as singing folk songs from hundreds of years ago—so there are a few pop songs you will recognize, which play an unexpected role.

Why use such an old form of poetry to structure and propel a play?

We were drawn to the Ballads partly because the Borders are sometimes slightly overlooked in Scottish culture—the Highlands with their dramatic mountains get more attention. We also simply love the ballads. They deal with all the real universal subjects—love, death, betrayal, courage, selfhood—and the music is so stirring and often simply gorgeous.

We also found having a character, Prudencia—who lives in her head in an almost idealized world of folk songs, but who has to contend with living in the real world with all its imperfections—was great material, and the story really flowed easily from that conflict. 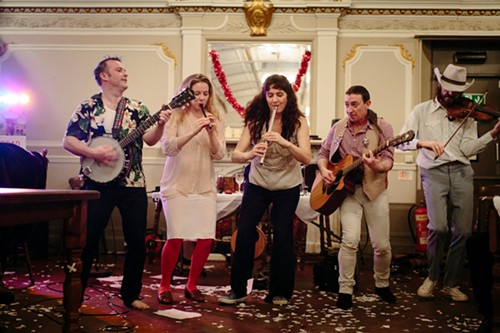 This looks cheeky as hell, tbh. But I can't write off Scottish accents and fiddlin' and magical tale telling without at least taking a look. Peter Dibdin

I heard the devil’s in this show. Is it just the regular old christian devil? Or are there particularities to Scottish delivery?

The show plays with ideas of who and what the devil is—after all Prudencia is an expert on hell, and on one level her visit to hell is her dream or vision. It is also a folktale where the devil is a concrete character, and this allows us to have some serious fun with who the devil could be in the modern world. (He turns up as the eccentric owner of a hellish B&B.) He’s certainly a very Scottish devil—a malt whisky-drinking Scottish hard man, but, as with all Scottish hard men, he has a very soft centre.

The Paradox of The Strange Undoing of Prudencia Hart