Now Is the Time to Eat Asparagus, Rhubarb, Nettles, and Ramps 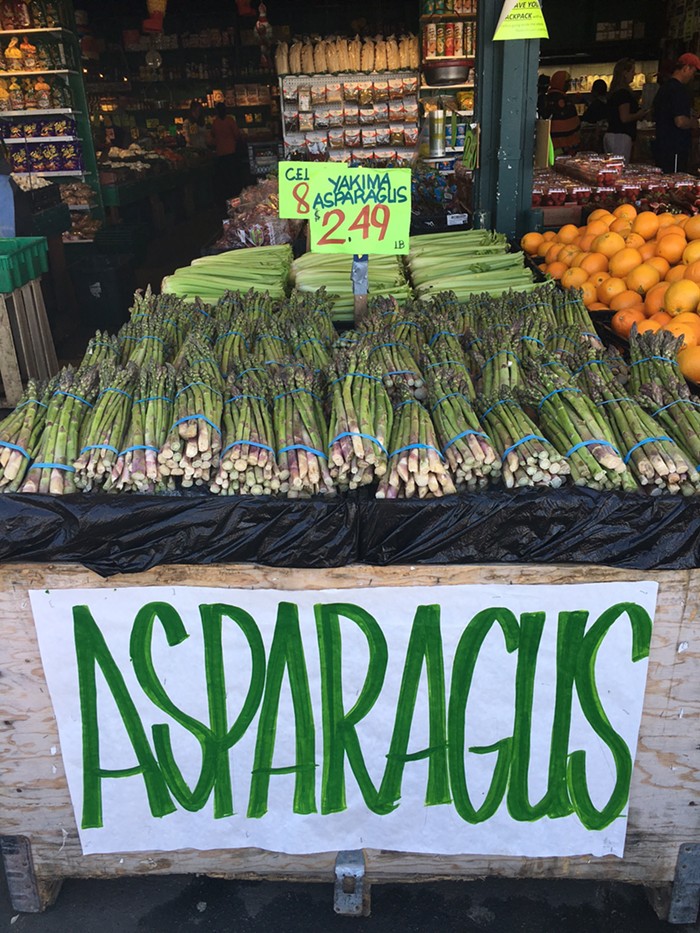 I enjoy tormenting myself, apparently. Every morning between 10:30 and 11 a.m.. I receive the same email from Pioneer Square's Il Corvo Pasta—an email that unfailingly makes my insides groan with longing as I work quietly at my desk a mile away, unable to act on the desires it triggers. The email, sent by chef and owner Mike Easton, announces the restaurant's menu of three pastas, which change daily.

"Pea-Vine pesto is back!," yesterday's email screamed silently at me from my Inbox, accompanied by a salacious photo of rigatoni, curvy tubes lounging atop each other in a bright green sauce.

I am almost never able to head down to Il Corvo for lunch, so the emails always pain me. And yet I am unable to unsubscribe from the list. Last week, when I read an email declaring "Spring is in the air!!," I realized that the daily messages chronicling the handmade pastas and sauces are part of how I track and understand the changing seasons.

Recent Il Corvo dishes have included fiore with spring garlic, butter, and chilies; sumac tagliatelle with asparagus; pasta misti with sorrel-hazlenut-pine nut pesto; and zane d'elefante (elephant tusks!) with buttermilk and wild nettle béchamel. Each green element is a sure sign of spring. (BTW, Il Corvo's similarly seasonally-minded sibling, Pizzeria Gabbiano, has closed permanently. It will reopen as Il Corvo Pasta Studio, a public space where people can watch all types of pasta being made and buy dried pastas to take home, possibly as early as the end of May.)

This week you can look outside the window and see that sunnier, warmer days have arrived—or, like me, you can study the changing menus around town.

Asparagus, nettles, rhubarb, ramps, peas, and fiddlehead ferns—these are tender spring ingredients that chefs around Seattle clamor for after months of root vegetables and winter greens.

Yesterday when I stopped in at Fremont's Vif, an asparagus fritatta and rhubarb mini-gallettes jumped out from the daily selection of pastries and treats. At Greenwood's Coyle's Bakeshop, sweet rhubarb croissants and savory asparagus croissants have been making appearances. At Tilikum Place Cafe in Lower Queen Anne, there's currently a mache salad with pickled rhubarb on offer.

You'll find an asparagus soup with creme fraiche and English pea agnolotti at Ethan Stowell's newest restaurant, Marine Hardware. (The location used to be Stowell's Chippy's Fish and Chips, but he closed it and reimagined it as a higher-end place with small plates and prix-fixe menus). The chalkboard menu at Columbia City's La Medusa recently sported burrata with grilled ramps and top sirloin with escarole and fiddlehead ferns. And a few weeks ago, at the expanded Little Uncle on Capitol Hill, I happily slurped a spicy, brothy jungle curry made with wild boar, bamboo shoots, and wilted nettles.

Current dishes at Capitol Hill's Lark include semolina gnocchi with nettles and Neah Bay halibut—the fish that marks the arrival of spring— with raw artichoke, herbs, and za'atar-spiced yogurt. At Marjorie, also on Capitol Hill, chef Zephyr Paquette has settled nicely into her role as chef, and is serving halibut with pea vines and black lentils, as well as a foraged nettle risotto.

Of course, spring extends to beverages too. The bartenders at Beacon Hill's Bar del Corso are currently mixing rhubarb tonics made with rye, tonic, rhubarb simple syrup, and rhubarb bitters. At grocery stores and wine shops across town, shelves glow pink, stocked with seemingly endless bottles of rose just waiting to be tucked into picnic baskets.

My current favorite summer beer, the ridiculously easy drinking Ziggy Zoggy lager from Bremerton's Silver City Brewery, is also starting to pop up around town. I picked up a six-pack at the PCC in Columbia City last week, but you'll also likely see it on tap throughout the coming months at places like Brouwer's, the Pine Box, Chuck's Hop Shop, Brave Horse Tavern, Zeek's Pizza locations, and the great Athenian Inn.

Ziggy Zoggy is a German kellerbier. I'll leave the technicalities to beer nerds and just tell you that the lager is crisp and dry, a little bit malty and sweet. It's unfiltered, bright yellow but slightly hazy, much like a Seattle sun triumphantly breaking through spring clouds.

Don’t miss this BAM exhibition. It closes on October 10.