1
Actually, I myself would be *less* freaked out by diapers-as-sexual. Not my thing, but sex is a lot easier to compartmentalize: it's pretty easy for me to accept that people are wired how they're wired, you can't help what turns you on, and what flips your switches in the bedroom has very little to do with who you are outside it.

With stuff like ageplay, lifestyle submission, those guys who dress up as puppies, etc, if it's *not* sexual it comes off as...needy? Deliberately incompetent? Like, if deliberately not being a functioning and independent adult for an hour on Saturday night turns your crank, cool. If you feel the non-sexual need to have someone take care of you like a child/animal *all the time*....yeeesh, at that point I'm tossing the number of a therapist over my shoulder as I run away, because no.
funwithrage on June 6, 2016 at 5:04 PM · Report this
2
My boyfriend wears diapers when he's stressed out. Much like a security blanket or teddy bear, it's just a way to help him relax. It's not sexual and he didn't like it when I tried to make it sexual. (I try to encourage his kinks.) It is a major source of embarrassment for him, tied up with when he was a bed wetter as a child and his mom used to tease him about it. I just try to reassure him that I'm okay with it as long as it's not every night. On special occasions I'll even put on a diaper myself and we'll be padded together. I only do it for him and he knows that, but it makes him happy.
Shival on June 6, 2016 at 5:35 PM · Report this
3
As long as it's not so he can drive several states away without stopping to stalk his other "girlfriend", you're fine.
biggie on June 6, 2016 at 5:52 PM · Report this
4
I'm an ABDL -- a sexual one -- and I admit to being a little skeptical about "non-sexual" ABDLs too, but there sure are a lot of them out there.

Some of those folks keep their diaper stuff separate from their relatively-vanilla stuff because of kink-shame, some for other reasons. Some really aren't into the vanilla stuff and regard themselves as asexual. But I suspect that most people who wear diapers voluntarily are on some level aroused by it. Even if it's also about "security". Security can be smokin' hot.

I avoid speculating about this to their faces though. Even if I think someone is mistaken, it's pretty rude to tell them they're wrong about what they feel.
Enfant on June 6, 2016 at 6:01 PM · Report this

5
Are adult diapers always kinky? Can't the boyfriend just be incontinent (and embarrassed about that)?
originalcinner on June 6, 2016 at 6:05 PM · Report this

6
I'm thinking that "faulty compatible" was auto-corrected from "fully compatible".
saxfanatic on June 6, 2016 at 6:25 PM · Report this

7
I'm having trouble seeing why this is any kind of issue. He told her about something he likes to when he's by himself. He has no desire to include her in the activity-- nor does she want to be so included-- and it does not harm anyone.

So... who cares? My wife does all kinds of weird shit when I'm not around. So do I. So does everyone-- we all have our private little habits. Diapering is a little outside the norm, but the same "doesn't involve me/ doesn't hurt anyone" dismissal should apply.
I Hate Screen Names on June 6, 2016 at 6:31 PM · Report this

8
Because, I Hate Screen Names, they've only been dating a month. The likelihood is that he's starting out with a small, relatively easy reveal but that diapers will end up being more significant to him than he disclosed at first.
Alison Cummins on June 6, 2016 at 6:43 PM · Report this

Are there also people who are into pain or control but specifically don't like to mix it with sex (as they define sex)? I know, the answer to an existence question is always yes...

Unless more comes up, both parties sound like reasonable folks who can navigate this. Just an unsolicited reminder that working well on this doesn't mean anybody's committed if they decide they'd rather not be involved. Do you see people doing that, they do some relationship work and it seems to create an unexamined assumption that now they're "in"?

This explanation actually makes more sense to me than the standard sexual motivations for wearing diapers. And human males do (occasionally) have other compulsions besides sexual ones, right? Right?
WoofCandy on June 6, 2016 at 10:42 PM · Report this

14
Sax @6: Thanks, I was wondering what on earth "faulty compatible" could mean. Their faults mesh well together?

Sounds like this is his little private thing and a non-issue. I'd take it as a good sign he trusted me enough to share it with me, and never bring it up again unless he did.
BiDanFan on June 7, 2016 at 1:56 AM · Report this

15
I am beginning to think there are a lot more dudes walking around wearing diapers than I have ever expected.

Theodore Gorath on June 7, 2016 at 6:08 AM · Report this
16
Maybe it's more of a sexual identity thing than a sexual expression thing. Wearing the diaper (and having his lover know about it) makes him feel like who he really is, and that makes him feel more empowered in the bedroom. But he doesn't want to actually bring it into the bedroom.

Or maybe, like WoofCandy said, it satisfies another, also important, but non-sexual need.They do exist.
Xanny on June 7, 2016 at 6:42 AM · Report this

17
Yes, LW's boyfriend might be telling everything there is to tell. Or he could be a freaky diaper fetishist starting out slow. At this point there is no way to tell the difference and LW needs to think about both possibilities.

A lover asked me to hold him in my arms and give him my breasts to suck as if he were nursing. I did. I also told him that adult baby is a difficult kink and if he wanted to be diapered I wasn't going to be able to go there for him. There wasn't anything more behind his request, but just in case there was he needed to know.
Alison Cummins on June 7, 2016 at 7:36 AM · Report this
18
Xanny @16: "wearing the diaper...makes him feel like who he really is"

I dunno about LW's boyfriend, but that's an admirably succinct and insightful explanation of how it is for me. Wearing diapers makes me feel less phony, more at home in my skin. Which, in turn, is sexy for me.

(I have no explanation for this aspect of my psyche; it seems to have come factory-installed. Pretty much as soon as I was toilet trained I decided it was overrated.)

22
Tiny Tim wore adult diapers all the time, not because he had to, but because he liked the feel.

23
re:@22 Not judging...along the spectrum of kinks just wearing diapers is about a negative 2. But I'd keep a weather-eye out for the other shoe to drop.
DonnyKlicious on June 7, 2016 at 1:23 PM · Report this
24
He might be an highly functional on the Autism spectrum and doesn't know it. My husband sleeps with tons of stuffed animals. I do sort of believe it could be a security thing.
coffeepunk on June 7, 2016 at 1:33 PM · Report this

25
@24 Jesus Christ on a pogo stick! Could we please, please, please stop acting like sort of unusual behavior is a sign of either mental illness or autism? Really people do have motivations and reasons that go beyond sexual kinks, and may nothing to with how their brains work.

The guy said the diapers make him feel safe, why not take him at his word and stop treating him like he's lying because the explanation isn't interesting enough?
msanonymous on June 7, 2016 at 2:13 PM · Report this
26
LW (Ladyfafa13)
Speaking as someone who felt he has to hide his shtick for many years I’d say your bf is on a much better course. He already told you and he signaled he can go with it on his own. He may be too shameful and he may want you to join in the future to some capacity. We don’t know yet, but we do know that he is already trusting you enough to share with you a lifelong shameful secret.
I hope you appreciate.

My suggestion: let him go with it for some time and don’t make any mention of it, signal it is REALLY a non-issue., maybe after couple of beers and funny looking small pipe in the alley before you get back home.
And look at the extremely bright horizon: if you do have a kink/desire/old boyfriend visits or anything else you want to fulfill then you may have a powerful chip bargain for a peacefully negotiated indulgent-exchange program.

Enfant- thanks for writing, being upfront, educational, and giving LW insight and good advice. Not to mention having to deal with attempted jokes that can be deemed offensive to you.

Coffeepunk suggested that this LW's boyfriend may be on the spectrum because her husband has an odd childlike habit and is on the spectrum. Personal experience, not prejudice, Same reason I suggested DCMC might be using "kid" as a pet name because I do something similar. And let's not start again with accusations of lying. How does LW's boyfriend saying "they make me feel safe" become a lie if LW's boyfriend is autistic? It was just a suggestion, not an armchair diagnosis.

Step away from the boards, have a nice cup of tea and relax. Not everyone is an asshole.

30
@29 Diagnosing people online is a pet peeve of mine. I was probably too harsh though.
msanonymous on June 7, 2016 at 4:29 PM · Report this
31
I think everyone actually has a point. I feel like I should leave it be for now, and if he would like to talk again about it I will be open. I also feel like I should keep an eye out for something else that he would like to drop on me but hasn't gotten the courage to do so yet. I like the guy, he's been super sweet to me. And I don't want this kink/fetish/whatever to cloud my feelings for the nice guy that I've met. I also could see the autism spectrum angle. Its entirely possible he is just highly functional. I wouldn't feel comfortable asking about that yet, but it's possible I would in the future. Again, thanks everyone! So so helpful!
-LW
Ladyfafa13 on June 7, 2016 at 7:21 PM · Report this 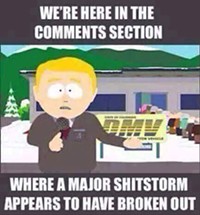 35
It's perfectly okay to not be okay with someone's kink. You don't have to be. You can wish a person well and hold no ill feelings while simultaneously deciding not to continue a relationship with someone because their kink is one step too far. Does not say anything bad about you, or them. This kink leaves me screaming in horror internally. But there's no reason to be impolite.