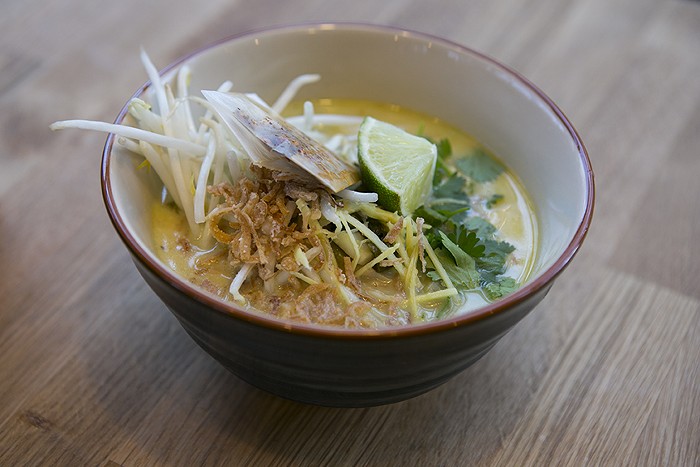 The bad news: You can't get Little Uncle's khao soi from its walk-up window anymore. The good news: You can still get it at the sit-down restaurant. Jennifer Richard
Sponsored

There’s lots of wine, as well as local beers and locally brewed kombucha on tap. Atlantic is owned by Lex Petras, a neighborhood resident who also owns Pioneer Square's German beerhall Alstadt. The restaurant is located across the street from the excellent Standard Brewing and one block away from fried chicken haven Quick Pack Food Mart.

Cinque Terre Opens in Downtown's Amazon Doppler Building
Named after five villages clustered on the Mediterranean coast of Italy, Cinque Terre is a seafood-focused restaurant that melds regional Italian cuisine with Pacific Northwest ingredients. Located on the Amazon Doppler campus and owned by the Varchetta family, who also own nearby Barolo restaurant, Cinque Terre’s signature dishes include housemade pastas, mussels, octopus, and selection of pizzas. Also: Pesto. ("Pesto, a condiment made of primarily fresh basil, is the flagship of tradition in the region," the Cinque Terre menu rhapsodizes. "We make our pesto every day, from the freshest and best quality ingredients.")

The Little Uncle Walk-Up Window Has Closed, Will Reopen as Manu’s Bodegita
When Little Uncle owners PK and Wiley Frank opened the expanded, sit-down version of their casual, walk-up restaurant back in March, the walk-up window remained closed so the couple could focus on the new venture. Seattle Met reports that the Franks have decided to close the window permanently.

Luckily, the Franks have already found someone to take over the space: Manu Alfau of Pioneer Square's Manu's Bodega. Alfau will open Manu's Bodegita there in July serving breakfast, lunch, and dinner. The menu will include empanadas, the popular puerco asado sandwich, as well as coffee and breakfast tacos.

Ethan and Angela Stowell Are Opening A Second Tavolàta on Capitol Hill
On my last two visits to Trove Noodle, cooks there were eager to gossip about how they'd been seeing Ethan Stowell coming and going from the space across the street for the past few months. Now comes official word that the Stowells will open a second location of their popular Belltown restaurant Tavolàta at 501 East Pike Street, at the corner of Pike and Summit.

The 2,600-square-foot space, in the newly renovated Dunn Automotive Building, will be built around a large communal table (that's where the restaurant name comes from), with plenty of bar and dining room seating. There's also talk of a patio facing Summit avenue. The menu, overseen by current Tavolàta chef Addam Buzzalini, won't stray far from the well-known menu of extruded pastas and hearty proteins. The restaurant should be open by the end of this month.

The Seattle Police Department's Only Defense Right Now Is Propaganda