My Wild Night with the RNC's Openly Gay Underground. Wait, Did I Say 'Wild'? I Meant HORRIBLE. 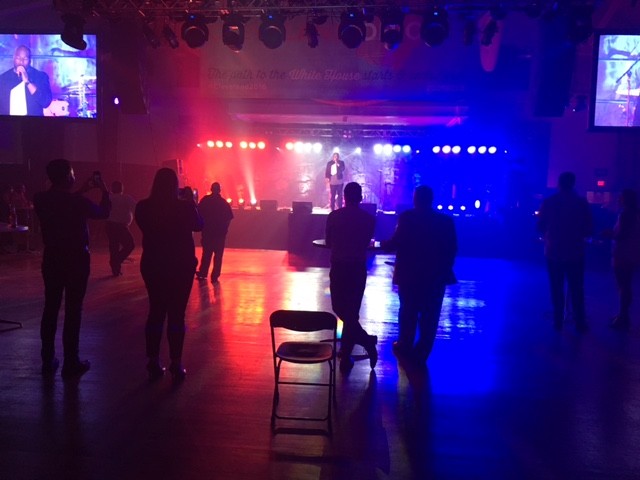 Before landing in Cleveland, I put in a call to the Log Cabin Republicans to ask if they had any lesbian-focused events.

"There are not usually enough lesbians to make an event at the RNC,” the press lady told me over the phone.

I appreciated her candor, though it did make me wonder: How many lesbians does it take to make an event? Regardless, I wasn’t expecting much when I signed up for the Log Cabin “after party” at Cleveland’s Grays Armory on Tuesday night. The event promised a concert with contestants from American Idol and The Voice, as well as something called “Liberty Down Deep,” which I initially thought would be some sort of nationalist drag act. Sure, why not? I thought. Let’s get weird!

It was somehow worse than I expected.

I arrived at Grays Armory a little after the advertised start time of 11 p.m., and went through a metal scanner and a bag search to get inside. Dang! This must be a serious party! A young man in a red polo welcomed me inside the Armory foyer, and then into the venue space.

I quickly noticed that I was one of maybe only 15 people milling around in front of the stage. We stood in a very large room in front of this expensive-looking stage and two big TV screens. A well-groomed pop-rock boy band was playing, and the front man seemed to be doing his best Harry Styles impression. He wasn’t that bad, but I felt badly for him. His music was clearly meant for a packed stadium of sexually frustrated tweens, and instead he was playing to a mostly empty room of politically confused gay people.

This act, as it turned out, was Liberty Deep Down, and had I done any kind of Googling about them, I would have found out that they are not nationalist drag queens. The oldest member of the group is 20, and according to a community newspaper article from 2014, the name of the group “doesn’t have any particular meaning.”

The people in the room held up their phones to take pictures and clapped politely.

I used one of my two drink tickets to quickly down a whiskey soda and kept my eye on the door. A delegate from Texas wandered in with a woman on his arm, then wandered out.

Eventually, former The Voice contestant Anthony Evans took the stage to sing the national anthem. The two big TV screens projected a waving American flag while he sang to the still-mostly-empty room.

This was dangerously depressing. I needed to leave.

Luckily, the LGBTrump-hosted event advertised as “the most fab party at the RNC” was just down the street. By the time I got there, I had already missed the Islamophobic comedy set. Shoot! Just a few hours before the “fab” event started, Twitter banned its headlining act for harassing Ghostbusters actress Leslie Jones. I will not give this person the pleasure of SEO recognition, but I can tell you that he very much resembles a Nazi eugenics experiment that was left in the Petri dish for a little too long.

Someone just shouted at someone else, "LOOK AT YOU WITH YOUR UNBUTTONED SHIRT. GET OUT OF HERE, YOU LIBERAL."
— (((Brownstone))) (@sydbrownstone) July 20, 2016

My colleague Heidi Groover and I wandered around the LGBTrump event asking what people thought about our boss, Dan Savage. Only two people we spoke to there had even heard of him, and we soon realized that not many people at the LGBTrump party were actually gay.

One man told me that my eyes were “fucking exquisite” and another guy told me that I would look like Audrey Hepburn if I wore pearls. Another person apologized for accidentally touching my breast when he was explaining to me why he was voting for Trump, but told me that he might be able to hook me up with some weed. (The offer fell through.)

When I wandered into the hallway outside the party, I overheard a very misinformed blonde dude shouting to a journalist that Muslims believe that the Quran is LITERALLY THE WORD OF GOD and JEWS AND CHRISTIANS DON’T.

On our way out of the event, a man who claimed to be a journalist sauntered up to Heidi and myself and started talking at us, asking us what our “angle” on the whole thing was. By that point I was too tired, sad, and mad to say anything, so Heidi made the mistake of engaging this person in conversation.

This "journalist" told Heidi about why he thinks that Christianity breeds a unique kind of autonomy and appreciation of freedom in American citizens. As I overheard his spiel, I began to pray. If hell exists, I thought, a merciful God would surely send everyone who attended this party there on Judgment Day.

Then I realized that hell does exist. Heidi and I were already there.

What Is Trump's America?

by Sydney Brownstone and Heidi Groover