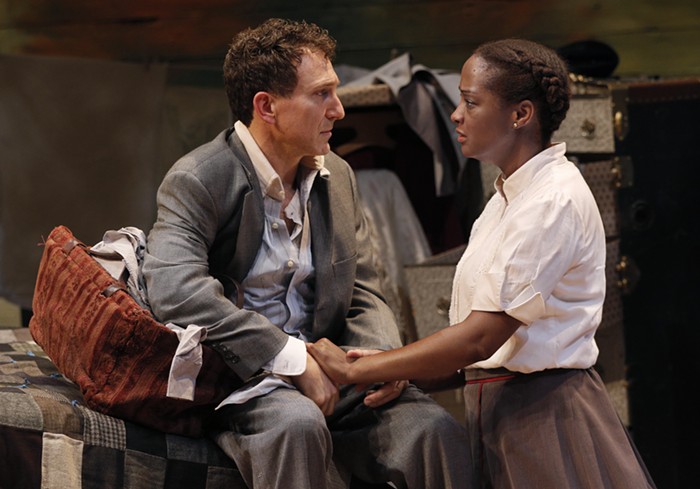 Over coffee, Intiman Theatre Festival's producing artistic director Andrew Russell and Stranger Genius Valerie Curtis-Newton were having a conversation about Curtis-Newton directing Alice Childress's Wedding Band: A Love/Hate Story in Black and White, an intense drama about interracial love in the Jim Crow south. Curtis-Newton said she'd "crawl across glass" to produce the play, and the two entertained the notion of turning Intiman's 2016 season into one big Childress festival.

The festival kicked off its season with Lydia R. Diamond's Stick Fly, a family drama about a black man bringing home a white woman. That play explores the nuances of race, class, and language in an affluent black family. Like Stick Fly, Childress's Wedding Band also centers black perspectives on interracial love, but the historical context isn't Martha's Vineyard in the early aughts, it's South Carolina, 1918. Mothers here think (and have cause to believe) that their sons are safer fighting the Germans overseas than simply walking down the street.

If Curtis-Newton had to crawl across glass in any way to produce this play, her wounds were well worth it. The performances she pulls out of these actors—and it didn't seem as if she had to pull too hard—are incredible, costume designer Mark Mitchell and set designer Jennifer Zeyl beautifully render the period, and the play, though it was written in the 1960s, hits with full force thanks to the quality of Childress's writing.

Onstage, white linens like angels hang on clothes lines. Three wooden crosses holding up the lines make a Golgotha of the backyard, which is shared by several women who rent from Fanny (Tracy Michelle Hughes), a self-described "credit to the race" who owns the property. The only person drinking any wine is Julia (Dedra D. Woods), a seamstress, who lives in the carriage house the clothes lines surround. Today is her 10-year anniversary with the amicable baker, Herman (Chris Ensweiler). The two haven't moved north and tied the knot yet because Herman still owes money he borrowed for his bakery, plus he has a mom and sister to worry about. Plus their relationship is illegal and can get them killed.

Zeyl has stripped the house's walls away, exposing Julia's bed to the open air, placing the audience in the same position as the South Carolina legislature/Pontius Pilate, scrutinizers and crucifiers of what goes on in their bedroom. The metaphor is clear: people in interracial relationships aren't granted the same privacy that intraracial couples automatically receive. The other loaded metaphor is the titular wedding band, which Herman gives to Julia on a golden chain.

The women in the neighborhood—including the plucky candy-maker Ms. Mattie (Aishé Keita), the warm and humorous Ms. Lula (Shaunyce Omar), who is the mother of the confident young soldier Nelson Green (Jason Sanford)—all weigh in on the love affair with jokes and advice.

The language in the play is often poetic, funny, and casually profound. Nelson, who has "nothing to offer but a hard way to go," says Julia "looks like a violin sounds" and seems like she "has all the right feelings, too." Every sentence has a sharp edge, like when Ms. Lula tells her son to "go off to the war before somebody kills [him]." And Julia announces the paradox at the heart of her story, her country, and her Bible in a perfect parallel line: "It's wrong to hate, but they say it's wrong to love, too."

Childress's command of language goes beyond linguistic fireworks and well-turned phrases. At one point, for instance, she has Herman feverishly reciting John C. Calhoun's "Speech on the Oregon Bill," wherein he critiques the idea that “all men are born free and equal" in an effort to assert the superiority of white people. On one level, in the mouth of a man locked in a fever dream, it's a critique of Calhoun's racist logic. On another, in the mouth of a white man who loves a black woman, Childress is turning Calhoun's critique back on him: if, as he says, liberty isn't an inalienable right but rather "the noble and highest reward bestowed on mental and moral development," then those who would deny liberty to someone based only on the color of their skin don't have the moral right to be giving or denying anybody liberty in the first place.

That idea is most strikingly dramatized when Herman comes down with the influenza. After hearing the news, Herman's mother (Anne Allgood) and sister, Annabelle (Amanda Hilson), visit him at Julia's house. The two don't want to take him to a doctor—even though it's illegal, in the time of this influenza outbreak, not to take him to the doctor—because they don't want to be seen leaving the black part of town. While everyone's discussing what they should do about this predicament, Annabelle lectures her brother on his love for Julia as he writhes in pain from the sickness.

Watching social pressures and inner conflict violently pick away at Julia's and Herman's love refreshed for me an idea that Claudia Rankine discusses in Citizen:

A friend argues that Americans battle between the “historical self” and the “self-self.” By this she means you mostly interact as friends with mutual interest and, for the most part, compatible personalities; however, sometimes your historical selves, her white self and your black self, or your white self and her black self, arrive with the full force of your American positioning.

In the play, Julia and Herman's relationship begins with the particular, with their "self-selfs." They talk about their personal goals and dreams. She shows him a sweater she made for him, but, adorably, one of the arms is too short. At one point, Julia tells her neighbors that she "just loves him," that's all. There's nothing more to it than that. But as the two characters become more emotional as a result of dealing with society's pressures, internal problems related to race emerge.

The two begin only to be able to see and remember each other's historical selves, which, at this point in history, are legally and socially incompatible. (Julia, for instance, recounts the dinners the couple spent in silence following lynchings, and says that she basically resents Herman for not denouncing those murders more vocally.) This trajectory of self-self to historical self is reflected in the characters' language, too. As emotions run higher, the characters increasingly use less personal language with each other and more historical, abstract language, which comes to a head in a brilliant and tense stand-off between Julia and Herman's family.

The levels of complexity in this play are matched by the power of its drama, which the actors convey seemingly effortlessly. You can almost watch the whole play in Dedra D. Woods's resting face. Her initial bright and curious countenance turns sour and defensive by the end. And Chris Ensweiler deserves a high five for managing to act even though half of his part is essentially him moaning and convulsing on a bed. Shaunyce Omar's warmth and humor was infectious, as was Aishé Keita's boldness.

Directing this play means that Valerie Curtis-Newton has directed all of Childress's major works, including Wine in the Wilderness and Trouble in Mind. When a director is so familiar with a writer's work, every little scene and symbol sings. That's certainly the case with Wedding Band. You'll want to see it once, and then see it again, just so you can feel like you caught everything.