Savage Love Letter of the Day: Open & Free (But What About Money?)

1
" I practice non-monogamy because I don't feel that I own his body or sexuality, and I really want to maintain a relationship that allows us to maximize our experiences in life, rather than pass on opportunities that pique our interest. So if this were a curiosity of his, there's a big part of me that would like him to be able to try it."

2
This is the sanest LW we have had in a long time.
BiDanFan on December 20, 2016 at 4:44 PM · Report this
4
Armchair psychology time: you're not actually freaking out about the idea of your boyfriend doing sex work. You say you've discussed and resolved the tension around the way he broached the subject, but my guess is that you're not quite done processing that yet -- but you're so committed to being a good and reasonable person that you've had to put that emotional affect somewhere, and now that's ended up on the other thing.

Give yourself a bit of time to finish processing the jarring (and tactically unsound) broaching, and you may find that your anxieties about the actual sex work have diminished.
Peter Kovalsky on December 20, 2016 at 5:33 PM · Report this
5
Um, am I the only one who got a "fake fake fake" hit off this letter?

Perhaps I am naive, but who the heck gets a large severance package in their 20s? I guess it can happen. But still. 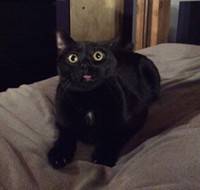 8
I'm definitely impressed by the level of shit-location the LW managed to achieve in such a short time!

As someone who has had friends, lovers and partners across all spectrums of sex work from strippers to dominatrixes to escorts, the number one problem I've seen is that it is emotional work. People tend to forget that "work" part. When relationships/encounters become transactional, it can become difficult to distinguish between the authentic encounters in your daily life and clients. In addition to that, most of those activities being marginally to completely illegal means that there are few resources available to sex workers to help them understand and process the healthy spaces for them.

So, if the LW's partner wants to have an adventure, go try it for fun. If he wants to make a career out of it, I hope he takes the time and does the research to understand how the work may affect him so he can maintain his existing relationships.
MonkeyFetish on December 20, 2016 at 8:05 PM · Report this

9
One glaring problem in Dan's response: His endorsement of The Ethical Slut. (Yes, I know he's endorsed it before.) There is nothing ethical about The Ethical Slut. Read some of the negative reviews on Amazon. (I don't mean from the right-wing religious crazies. I mean the intelligent ones.) Read some of the positive reviews, too, for balance (they do make good points), but there's something unsettling about a book which seems to imply, again and again (despite obligatory denials) that nonmonogamy is a better relationship model than monogamy, and if your monogamous partner has a problem with it, they're the ones in the wrong, not you. But the book denies this even as it supports this. What a despicable pile of trash.
TwitterEgg on December 20, 2016 at 8:13 PM · Report this
10
Dan, in your eagerness to be sex positive and sex-work positive, I think you missed something major. Sex work is illegal in most states (but not in my country thank god). There is nothing sex negative about not wanting your partner to engage in a risky and illegal activity. You made this false distinction between his respect for his sex worker's friends life choices and what he allows his partner to do. With respect sir, that's bullshit. My wife doesn't let me ride a motorbike any more (since a crash) but she respects the life choices of other mother bike riders. Likewise there are risky activities I wouldn't let my wife do (say: dealing drugs) which I don't judge in others. So what if they are non monogamous already, there is a huge HUGE difference emotionally and legally (if not physically and sexually as well) between casual sex and sex work. Somehow you swept that aside. Don't. LW is well within his rights (and sex positive cred) to say "not if you want to be in a relationship with me."
AustralianGuy on December 20, 2016 at 9:22 PM · Report this
11
@9 TwitterEgg: I fail to see the problem. If I get a book on how MACs work, why should I care if it implies MACs are better than PCs? Should I sulk if my "About France" book implies that it's a better country than Spain? If I buy a book on vegan recipes, should my main concern be that it has good recipes, or whether it implies veganism is a superior life choice?

Obviously, people who write about how to go about polyamory based on their positive lifelong experiences in polyamory are going to, wait for it, prefer poly. So? The book's about 'how to do the thing,' who cares if the author thinks 'the thing' is the best thing ever?
Traffic Spiral on December 20, 2016 at 11:21 PM · Report this

12
Twitter @9: The Ethical Slut's audience is people who have already decided that monogamy is not for them. Traffic @11 has already made most of the points that I would, but yes: If you picked up The Ethical Slut to help you decide whether to be monogamous or not, you've picked the wrong book. That's not the authors' fault.
BiDanFan on December 21, 2016 at 2:27 AM · Report this

13
@11 Because the book The Ethical Slut is used as a bludgeon by poly-leaning people to attempt to force their monogamous partners into a lifestyle that, at best, makes them uncomfortable. Maybe that's not the book's fault, but consider this: The book argues not just that one lifestyle is better, but that poly people are better--more honest, smarter, etc. That's not stated explicitly, maybe, but the implication is on every page.

@12 I'm not so sure that the audience is as narrowly defined as what you're saying, although your point is well taken.
TwitterEgg on December 21, 2016 at 7:50 AM · Report this

14
I like ‘More Than Two,’ and Franklin Veaux would have something to say about Dan’s unclear use of the word ‘boundaries.’

These days the formalized body of knowledge around sexuality, consent and relationships distinguishes carefully between boundaries (for oneself; good) and rules (for other people; bad). In this framework,
• ‘I will not date sex workers’ is a boundary, and good;
• ‘You will not accept gifts of money from your sexual partners’ is a rule, and bad.

This avoids hand-wringing about exactly what it’s acceptable to tell other people to do (the answer is always ‘nothing’) and the endless arguing and processing that ensues when someone doesn’t do what you tell them.

It’s possible that ESCORT is less worried about the industry and more worried about the boyfriend not being on a track in life that parallels his own, or of not sharing important values like ambition. It's possible that the boundary ESCORT needs to define is,
• I will only date men with similar levels of motivation and ambition to mine.
Alison Cummins on December 21, 2016 at 8:09 AM · Report this

Cocky @15: Er wow, classist much? Do you know how much Mr ESCORT donates to charity? Neither do we, so let's not conclude he is "entitled."
BiDanFan on December 21, 2016 at 9:21 AM · Report this
17
When I've had partners who messed around with someone else, I felt better if my partner really wanted it, and better in proportion to how much they wanted it. It made the jealousy I was experiencing feel worth it, and it was fun to see their excitement. I think the poster's initial negative response might have come partly from his partner proposing to have sex that he didn't really want, that he was doing for money rather than pleasure. As it became clear that this was more about adventure than income, it makes sense to me that his response changed, that he saw desire in his partner and was excited by his partner's enthusiasm for prostitution as an experience.
2sheds on December 21, 2016 at 11:26 AM · Report this
18
LW, if you're reading the comments, what if your boyfriend were to accept an expensive gift from one of the other men he's recently had sex with? Would that feel weird to you? If not, then what would be different about the gift being cash? Also, if your boyfriend has a curiosity & is turned on by the idea of sex work, maybe you could suggest doing some role play with him. That might help you understand & allay some of your worries, and it's also possible it would satisfy boyfriend.
pattergood on December 21, 2016 at 12:01 PM · Report this
19
Hey, In my younger days, I dated a couple guys who dabbled in the sex trade. No big deal. I knew about it before there was any deep involvement. It was all good. It was particularly good that I kept my expectations to a minimum and did not even consider them as potential life mates. Now if my current husband came to me and mentioned it, yes I would freak. It's different when introduced later in the relationship and everybody knows that. Your boyfriend is getting ready to move on....
rshoff on December 21, 2016 at 1:07 PM · Report this
20
OK, I think this is evidence that we've gone too far: LW is worried that his concern about his primary sex partner being an active prostitute is unwarranted.

ITS COMPLETELY FUCKING WARRANTED. You should be off your shit about this. In the name of being respectful of other people and their choices, by all means, allow your BF to make his own choice, but don't denigrate your own fears/concerns or diminish the idea that you'll come to face actual risk. Have we gone so far in our pro-permissive attitude that even our private thoughts should be self-censored? That's not a recipe for health.
Sportlandia on December 21, 2016 at 1:46 PM · Report this