Voices from the Historic Womxn's March on Seattle

Rhamona Rhapsody at yesterday's Womxn's March, which appears to have been the largest protest in Seattle history. Rich Smith
Ramona Rhapsody, 27
Burlesque performer

Equality for women and LGBTQ rights. I recently came out over the summer as bisexual—even though I’m married. My husband and all my friends have been really supportive, but the biggest thing is making sure that that equality still remains. I also want equal pay for women.

What will you do tomorrow to support that issue?

I am joining with the LGBTQ Allyship so I can go down with them to Olympia on February 2nd. They’re meeting with the state legislature. We’re going for equal housing, rent control, and equality for trans people using the restroom—you have to have a safe place to pee.

Phoebe: As black women, and as women of color in general, we have a lot of issues when it comes to housing rights, domestic violence, and economics. With him winning, a lot of women who haven’t felt as effected by policy suddenly do feel effected. So I don’t want our movement to be put aside because we have to be “all women."

What will you do tomorrow to support one of those issues?

For you, what’s the biggest challenge to women’s rights in the context of a Trump administration.

Cassandra: He got us mad over so many things—I’m an Aztec native—but the policy I’m most concerned about is abortion. Every woman has the right to do what they want with their body.

David: Everybody comes from a woman. Supporting women is supporting life, and we need to support life!

What will you do tomorrow to support that issue?

Cassandra: I volunteer at an LGBTQ organization for Latin people. I volunteer at Casa Latina. We're also members of CeAtl Tonalli, for native Spanish-speaking people. We have a dance celebration in March. It’s a celebration of the Aztec New Year.

I feel like they have all their rights. They have every right that men have, so I don’t understand the point of this protest.

So you don’t think women are embattled at all?

No. I think they’re seeking preferential treatment instead of equal rights.

What makes you believe that?

The things they are marching for aren’t rights.

Abortion isn’t a constitutional right, in my opinion. There’s no such thing as a wage gap. Birth control shouldn’t be paid for by tax payers.

Roe vs. Wade made abortion a constitutional right under the 14th Amendment.

I support abortion, personally. But I think it should be a states issue.

Erin: Reproductive choice. Environmental issues. And, they’re talking about defunding the NEA. On the scale of things, that’s not as pressing. But... still.

Kate: I’m a white woman, and that comes with a certain degree of privilege. But I’m worried about healthcare for myself and others. Even more than that, I’m worried about being silenced, about having things that are horrible and destructive being normalized.

Kristen: I’m most worried about underprivileged women of color. And climate change, too, which most directly effects underprivileged people. Oh, and not having access to healthcare anymore is terrifying. I have insurance through the Affordable Care Act, and who knows what’s going to happen. I don’t know if I get to keep my coverage. I don’t know if I get to get an IUD.

What will you do tomorrow to support one of those issues?

Erin: I’m going to leave my students really good comments on their papers.

Kristen: I’m working on getting certified to teach 4th graders. I work in an after school program now, and I want to keep working with kids. We have to raise them strong. 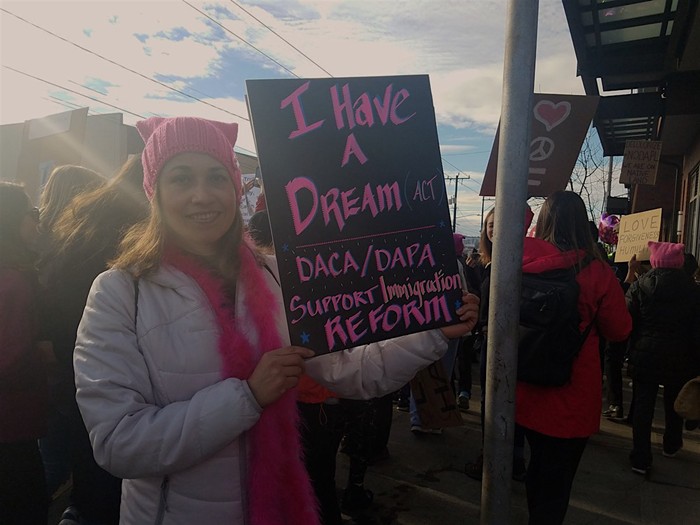 Why are you marching today?
I march for these reasons, [for DACA and DAPA].

I have many people who I know who really have been here for a long time and they need this opportunity. They have a heart, an American heart, and they belong to here.

What are you most worried about given the incoming Trump administration?

I know many guys who are DREAMers under DACA and they are in college. They really want to continue with college. [She starts to tear up.] I feel scared for them. Why are you marching today?

Given the recent political climate, this was the most I've felt targeted. I live with my parents and my dad watches the news everyday. The things that Trump—I'm still not ready to call him our president—has said directly affect me. He [admits to] mistreating women and there's the whole 'build a wall' thing. He's directly targeting all the minorities and that's where I got the idea for my sign.

I'm Filipino and I'm from Hawaii as well, and it's very diverse there. The policies that he stands for don't do anything for the minorities. That's why I decided to come today.

What are you most worried about given the incoming Trump administration?

Ever since he started campaigning and since he [was elected] president, there have been a lot more hate crimes happening. A lot more violence has been happening and that's my biggest fear—that I won't be able to walk on the streets without living in fear.

How do you plan to fight back?

I feel like this march is my first step in learning more about our society. I've watched documentaries like Miss Representation and The Mask We Live In, those two have helped broaden my mind when it comes to gender issues. So it's baby steps for me, for now.

[This marcher had her mouth taped shut and would not answer any of our questions.]

by Nathalie Graham and Rich Smith