Saturday’s Global Women’s Marches Were Massive and Inspiring. What Comes Next Is Even More Important.

The following story was co-published with support from Longreads and its subscribers.

More than a million people (and maybe as many as 3.7 million people) took to the streets of the United States on Saturday in opposition to Donald Trump. How do we translate that into action? SB

During Saturday’s Women’s March in Washington D.C., so many people flooded the National Mall and the streets surrounding it that the march couldn't actually move as planned. We were stuck. (The same thing happened in Chicago.)

But, even crushed among marchers frustrated at standing still, the crowd was electric and defiant—a refreshing rebuttal to the day before, when Trump supporters cheered as he promised, “From this day forward, it's going to be only America first.” The task now is to translate Saturday's impressive crowds into concrete action.

At the D.C. Women’s March, we saw both pro-Hillary Clinton and pro-Bernie Sanders slogans. Signs declared, “Women’s rights are human rights” and “Girls just want to have fun(damental rights).” Hand-drawn uteri warned: “Don’t tread on me.” Marchers chanted, “My body, my choice! Her body, her choice!” and “We want a leader, not a creepy Tweeter.”

The crowd was dominated by white faces, but undoubtedly more diverse than the one that attended Trump’s inauguration the day before. Still, lack of inclusion was an early obstacle for the march. When attendees expressed concern over the group's overwhelming whiteness (the original organizing force consisted entirely of white women), the organizers brought on three highly experienced co-chairs of color. Inclusion and intersectionality then became central to the march's written platform. "We believe Gender Justice is Racial Justice is Economic Justice," the march's "unity principles" read.

There were “Black Lives Matter” signs and one that read, “Intersectional feminism or bust.” Other signs declared "Black trans lives matter" and "Dykes against Trump." Marching down Jefferson Drive toward the Washington Monument, a group led by two socialist organizations chanted,“What do we do when women’s rights are under attack? Stand up, fight back,” repeating the same mantra for immigrants' rights, trans rights, Muslims' rights, and “all our rights.”

Earlier in the morning, a group of indigenous women leaders held a prayer circle and sang in front of the National Museum of the American Indian. The Indigenous Women Rise bloc, which was organized in part by the Tulalip Tribes' Deborah Parker, held up signs that read, "Defend the Sacred." Around the corner, high-profile activists like Angela Davis, Roslyn Brock, Cecile Richards, and Gloria Steinem spoke to a 500,000+ crowd.

"This is a women's march, and this women's march represents the promise of feminism as against the pernicious powers of state violence,” Davis told the crowd, “And inclusive and intersectional feminism that calls upon all of us to join the resistance to racism, to Islamophobia, to anti-Semitism, to misogyny, to capitalist exploitation.”

Finally, around 2 pm, the crowd dispersed from the National Mall, spilling out into the surrounding streets. Hundreds ended up as close as they could to the White House, where marchers shouted "We won't go away! Welcome to your first day!" and left the signs they brought propped up against the White House lawn fence. Two blocks away, some sort of Trump-themed float tried to make its way through the crushing crowd, which chanted “Shame!” and “We! Are! The popular vote!” Eventually, District of Columbia police forced protesters to clear an intersection so the float could make a lefthand turn and leave. “Na Na Na Na,” protesters sang in the float’s direction, “Hey hey hey, goodbyyyeee.” 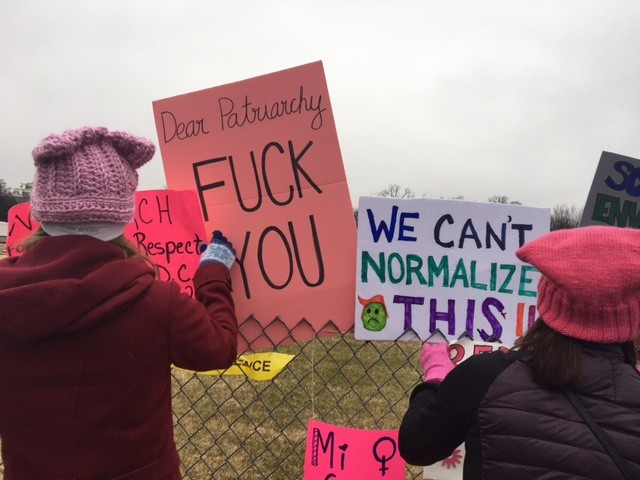 As news spread about the size of the rally here in Washington (470,000 people) and sister marches around the world (another million people), Donald Trump mostly ignored it, instead berating the media for reporting on the comparatively dismal size of his inauguration crowd. Meanwhile, on the left, attention focused what comes next.

"Yesterday was incredible, and the reports I'm seeing say that nationally, the marches that happened make up the largest protest in American history," Sarah Dohl, a former congressional staffer and current organizer behind the Indivisible Guide, a document instructing people on how to influence their representatives, told The Stranger a day after the marches. (Hear more about the Indivisible movement on this December 21 episode of The Stranger's Blabbermouth podcast.) "That's incredible," Dohl continued. "We made history. But in order to really make history, that requires really rolling up our sleeves and getting to work."

For Dohl and her fellow Indivisible volunteers, the last month has been one long march. Indivisible started off as a Google document written by concerned congressional staffers, but quickly went viral and expanded into a fully-fledged organization with a website, mailing list, and social media accounts. Dohl is hoping that the energy and excitement around the Women's March can be leveraged into other concrete actions from the guide in the weeks and months ahead.

One of those actions starts tomorrow. On Tuesday, the authors of the Indivisible Guide are asking that everyone who participated in the marches show up to their senators' district offices to register their opposition to Trump's cabinet nominees.

"We are hopeful that the people who found yesterday inspiring are going to go home, download this guide, find a local group to act against Trump's agenda, make visits to members' of Congress district offices," Dohl said. "We know that's what's going to work."

Channeling the good intentions of people across the country into a cohesive political opposition isn't easy. But on days when the project feels overwhelming, Dohl remembers her own reasons for resisting: Her husband has a preexisting condition, and her son has a neurological speech disorder whose treatment wasn't covered by individual insurance plans before the Affordable Care Act.

"If the ACA is repealed, I'm not sure what we will do," she said. "That's the issue that keeps me up at night and keeps me going when this project gets exhausting."

Thank you to Longreads Members for partnering on this story.
The Stranger depends on your continuing support to provide articles like this one. In return, we pledge our ongoing commitment to truthful, progressive journalism and serving our community. So if you’re able, please consider a small recurring contribution. Thank you—you are appreciated!
CONTRIBUTE NOW