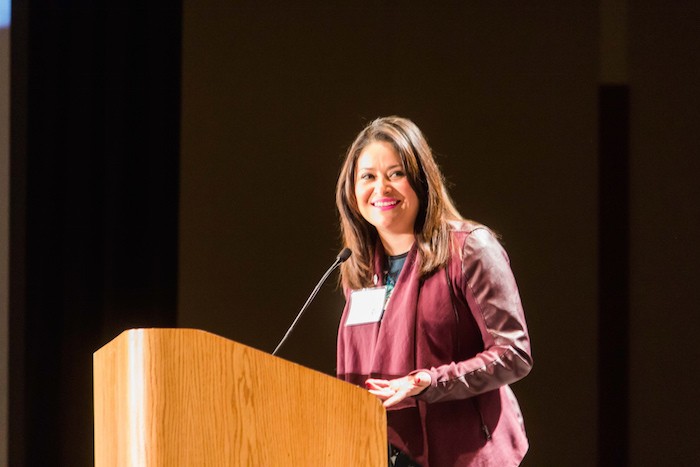 Seattle City Council Member Lorena González, who is up for reelection this year, is proposing a plan to give Seattle workers 26 weeks of paid family leave. City of Seattle

The United States is one of the only industrialized countries in the world to offer no paid leave for new parents. Paid parental leave benefits parents, children, and the labor market. Paid family leave—which allows people to care for sick family members, not just new babies—helps even more.

If you're a card-carrying Seattle liberal, you know all this already. So do the nine members of the Seattle City Council, who have all expressed at least theoretical support for gender equity. But until now, they haven't actually done that much about it.

Like King County, the City of Seattle has created and improved its own paid family leave policy for city employees, but that doesn't cover people who don't work for the government. Soon, that could change.

Today, Council Member Lorena González unveiled one possible route the city could take to giving workers across Seattle more than six months of paid time off when they become new parents or need to care for a sick family member.

Employees would get 100 percent of their wages up to $1,000 a week. Here's what that would look like for various incomes:

A breakdown of the proposed family leave policy for workers of different income levels from Council Member Lorena González's office. (Click to enlarge.) City of Seattle

Businesses of all sizes and all employees who've worked at least 340 hours for a qualifying business would be covered. The program would begin collecting premiums in January 2019, with the leave available starting in January 2020. Self-employed people could opt-in to the program.

Several states have adopted paid family leave policies, most of them insurance models in which employees pay payroll taxes toward the leave. San Francisco has a six-week policy, and late last year, Washington, D.C. created a paid leave policy that will be funded through a business tax.

The proposal, which follows months of discussion of paid family leave among council members and roundtable meetings between González and local business owners, sets the city on a path toward private sector paid family leave. Still, it won't happen right away.

In a statement, González said that before pushing for Seattle to go it alone, she'll wait to see whether the Washington State Legislature creates a statewide paid leave policy. Back in 2007, Washington passed a law to give new parents partial pay for five weeks off, but never funded it. This year, state legislators are considering two competing family leave proposals, one from Auburn Republican Joe Fain giving parents 12 weeks and another, more generous, proposal from Everett Democrat June Robinson giving parents 26 weeks. (The proposals differ on who pays what; both would offer partial pay.)

If Seattle is to go it alone, González, who rarely takes on policies she can't win, will need support from her council colleagues. Council Members Sally Bagshaw, Lisa Herbold, and Rob Johnson have participated in events advocating for paid family leave. Council Member Kshama Sawant has called for paid family leave, and her office was at one point considering proposing a business tax to raise money for a family leave policy. Sawant also tried unsuccessfully to expand the city's paid leave policy for its own employees back in 2015.

At 9:30 am, González will discuss her proposal at a council committee meeting. You can watch live here.