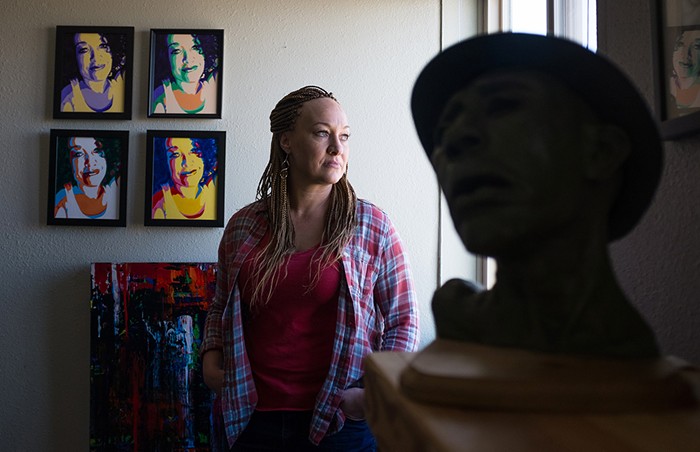 EDITOR'S NOTE: Rachel Dolezal has been the subject of national scrutiny and a virtual pariah since the one-time president of the NAACP chapter in Spokane, Washington was forced to resign from her position after her true color and background was revealed to the public. She was not black at all. She was very white, and raised by white parents. Last fall, she announced a forthcoming memoir, In Full Color, and in the wake of its March 28 release, we set up an interview. Dolezal ended up spending four hours talking to one of our most brilliant, candid, take-no-bullshit writers, Ijeoma Oluo, a black woman. This is an excerpt from the story that runs tomorrow in an entire issue we devoted to exploring Dolezal's current hometown, Spokane.

Throughout our conversation, I get the increasing impression that, for someone who claims to love blackness, Rachel Dolezal has little more than contempt for many actual black people and their own black identities.

The dismissive and condescending attitude towards any black people who see blackness differently than she does is woven throughout her comments in our conversation. It is not just our pettiness, it is also our lack of education that is preventing us from getting on Dolezal’s level of racial understanding. She informs me multiple times that black people have rejected her because they simply haven’t learned yet that race is a social construct created by white supremacists, they simply don’t know any better and don’t want to: “I've done my research, I think a lot of people though haven't probably read those books and maybe never will.”

I point out that I am a black woman with a Political Science degree who writes about race and culture for a living, who has indeed read “those books.” And as someone who has read “those books” I find her blanket justification of “race is a social construct” overly-simplistic. “Race is just a social construct” is a retort I get quite often from white people who don’t want to talk about black issues anymore. A lot of things in our society are social constructs–money, for example, is one–but the impact that they have on our lives, and the rules by which they operate, are very real. I cannot undo the evils of capitalism simply by pretending to be a millionaire.

Dolezal looks me in the eye and says with a straight face: “I'm not trying to redefine anything. In fact, I didn't try to coin a transracial term, or any of that stuff.”

“Money's a social construct,” I say, but it's still real. Money's imaginary, [interest rates change] depending on what the government decides, but the effect it has on everybody's life is incredibly real. When I write about race, I often get people coming back and saying, ‘Why are you focused on this? Race is a social construct.’ That's primarily white people who say it because the default of the social construct is, whiteness is invisible... But part of white supremacy is actually never having to acknowledge you're white, freedom from a lot of that because you're the default. My question is, does this actually deconstruct race when it still only goes one way?

Pick up a copy of The Stranger tomorrow—Wednesday, April 19—or return here to the Slog to read the story in its entirety.