Update: An Interview with the Transgender Patron Denied Access to the "Family" Bathroom at Seattle Public Library 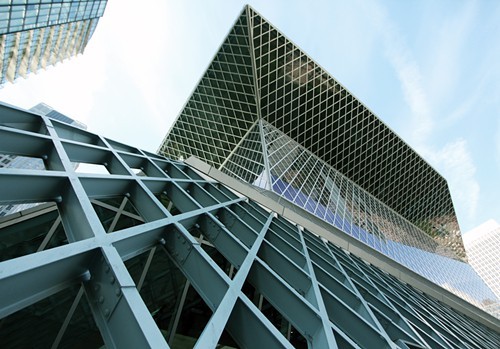 One library employee allegedly denied the patron access to the single-occupancy "family" bathroom because he wasn't a family. Kelly O

In a very thorough Facebook post, a transgender man says two Central Library employees and one library security staffer denied him access to a "family" restroom on Monday, June 5.

According to Ryan Alley, one employee said he couldn't use that restroom because he didn't have a "family" with him, despite the fact that he says he's used the bathroom solo several times before. Alley then asked to speak to a supervisor, who allegedly affirmed the first employee's decision and added that the family bathroom wasn't available to transgender patrons. After asking to speak with someone else, Alley says, a security guard was called.

Alley, who describes himself as a regular visitor to the library who is also a disabled, transgender man on a fixed income, says one of the employees directed him to "another bathroom at another facility a significant distance from the library," which he called "an unreasonable request to someone who already has a difficult time navigating the city due to [his] disabilities."

Here's the statement from a spokesperson at SPL:

An adult patron recently requested use of the Family Restroom located inside the children’s area of the Central Library, which by Library Policy is for use by children with their caregivers.

The patron was not with a child and was offered private use of another public restroom on the same floor, but the patron declined.

The Library has been in contact with the patron and we are working to ensure accommodations are available when he visits the Library in the future.

The patron has contacted the Office of Civil Rights, which is looking into the matter.

In March 2017, the Library began the process of design and installation of a new gender neutral restroom for Level 3. Construction of the restroom is expected to be completed by the end of the year.

Until that restroom is available for use, the Library will provide an option for transgender patrons requesting private use of a restroom.

The Library continues to be committed to providing a safe, welcoming space and experience for all patrons – children, teens and adults.

To clarify, this patron was not excluded from the Library for requesting use of the Family Restroom. Instead, the exclusion was based only on a failure to follow a staff member request.

Based on an administrative review of these circumstances that 3-day exclusion was immediately revoked and the patron has been welcome to use the Library.

Elliott Bronstein, the public information officer at the Office for Civil Rights, says it is looking into Alley's complaint.

"As signage," Bronstein told me, "'family' is a sufficient designation to mean 'all-gender."

He also said that you can't deny someone access to a "family" restroom just because they don't have a family with them, and added that "generally you're not supposed to deny someone the restroom."

SPL apologizes "for any distress caused by a recent incident at Central Library."

In an e-mail, Alley told me he takes issue with a number of points the library raises in its statement. While it's nice that SPL plans to "provide an option for transgender patrons requesting private use of a restroom," Alley stresses that he did not file a special accommodation request.

"I filed a complaint for being denied access to a restroom," he wrote. "My access to this bathroom is already protected by the city All-Gender Restroom Ordinance and the Americans with Disabilities Act."

Alley added that he looks forward to the day when he doesn't need "the teeth of legal protections" to go to the restroom, but called for people to act when institutions appear to violate those protections. "I do not have *special* needs," he said. "I have human needs."

It's no secret that people use drugs in the Central branch. According to a typically salacious KIRO report, the "overwhelming majority" of public overdoses happen in "city hall, the Central Library, Municipal Court, downtown Macy's, the Nordstrom flagship store and Met Market in Queen Anne." To address this concern, the library employs a social worker who directs "one or two" patrons per month to addiction services.

More pertinent to this story: the doors on the "private stalls"—in the Men's room on the 4th floor, at least—are only hip-high, presumably to discourage people from shooting up in there. Trying to maintain dignity and trying to take a dump are completely divorced enterprises at the library.

This is all to say that I can imagine the "Family" restroom, locked and private as it is, might be prime real estate for people who want to use drugs. So I asked Alley would he'd say to readers who could understand library employees wanting to exercise a little discretion in this department.

"The library does not need to police who uses what bathrooms for what purposes," he replied. "I was told this policy is to protect children and families...[but] more policing only harms more people. It harmed me. It harmed my family. It harms my friends."

He added that he suffers and increased risk of assault in a multi-stall bathroom, and that he didn't feel like taking that risk that day.

Alley also disputes the library's claim that he was offered private use of a public restroom, but said he wouldn't have taken the offer anyway. "Nobody should need a bathroom escort," he said.

He hasn't been back to library since the security guard kicked him out. "Before this happened, the library was one of my favorite places and this was my favorite branch," he said. "But after what happened now I don't feel like I can go there without my entire family."