The first annual Backyard Bunkhouse BBQ Brawl and Rock n Wrestling Rager at Sisters and Brothers in Georgetown got bloodier than expected. As the video below shows, Stallion guitarist "Luscious Luke" Beetham endured a whoopin' from legendary wrestler Kevin Sullivan. Yes, wrestling is scripted entertainment, but things got out of hand and Beetham ended up going to Harborview Medical Center and getting 17 stitches in his head. He's doing fine now.

Event organizer Pete "Hollywood" Capponi noted, "Everybody kept coming up to me telling me it was the coolest thing that's ever happened in Seattle." In a phone interview, Beetham said that Stallion's attempt to resurrect the cage match approach of the late-'70s and early-'80s pro wrestling went smashingly overall and was well-attended, and the group plans to hold another event of this nature—hay bales, county-fair atmosphere, belching contest, and all—next year.

Spice Up Your Life 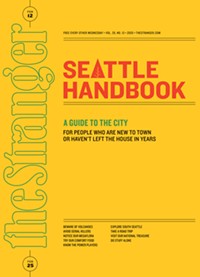