In Week of Separation in the NFC, Seahawks Needlessly Kick Themselves in Metaphorical Groin 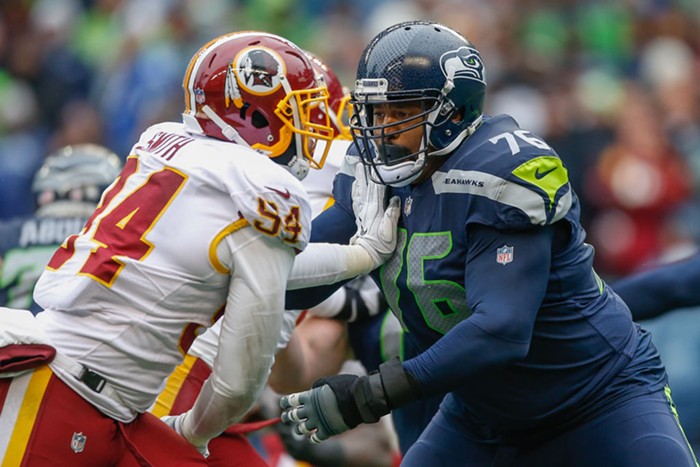 Good god, that was an unpleasant football game. As thrilling as the previous week’s win over Houston was, that was how stultifying the Seahawks 17-14 loss to Washington was on Sunday. ’Twas a kick-missing, penalty-drawing, pick-throwing affair, and boy howdy was it stupid. It was just so stupid. And worse than its stupidity, this game was damaging to the Seahawks' hopes of making some sort of insufferable return to the Super Bowl.

While Seattle was reenacting Hans Moleman’s legendary performance in Man Getting Hit By Football, The Eagles romped past the Broncos, the Rams destroyed the Giants, the Cowboys womped the Chiefs and the Saints routed the Bucs. The Seahawks should be all rights have kept pace with their supposed peers, as they outgained a pretty good but injury-riddled Washington team 437-244. Instead they lost. Like the groin-grabbingly stupid idiots they are.

How exactly did they lose? Let’s break it down:

Someone kicked my car this weekend. Like straight up kicked it, putting a dent in the car with their boot. I’m unclear on when it happened or why. All I know is that I came back to my car in the morning and it had been kicked by someone with a big ass shoe. Which is to say I was POSITIVE that I had identified the kicker who would piss me off the most this week. I was wrong

Kicker Blair Walsh, whose psyche Seattle destroyed a little less than two years ago, decided to let the psychological facade he had built to convince folks he once again had the capacity to kick footballs crumble into disrepair on Sunday. I do feel bad for the guy. He took responsibility post-game, and has, even with these three misses, been a solid kicker all year. So I’m not going to pile on anymore. But I am going to cock an eyebrow and say that if this shit happens again… I’ll cock the other eyebrow. Then one more time? I’ll be all out of eyebrows, Blair Walsh. And who knows what happens then (what happens is he probably loses his job… football’s an unforgiving business).

• The Seahawks offensive line kind of had their best game of the season with new left tackle Duane Brown performing well in pass protection, and the team’s running backs gaining as many as five yards before getting hit by opposing linemen. The Seahawks' offensive line also kind of had their worst game of the season as all five members of the unit were penalized at some point in Sunday’s game. Right tackle Germain Ifedi’s penchant for holding opposing linemen as Russell Wilson escapes the pocket will one day be listed by the coroner as my cause of death. LET GO, GERMAIN. LET GO.

• The defensive line played really, really well. Five sacks, a couple forced fumbles, and only 51 rushing yards allowed all without Sheldon Richardson and Cliff Avril. Michael Bennett was his usual excellent self, and elderly gentleman Dwight Freeney and young gentleman Naz Jones both made huge impacts. Literal huge impacts. They’re big men who ran into Kirk Cousins repeatedly. They deserve better than everything that everyone else did.

• Oh except for Bobby Wagner. Bobby Wagner did good things on Sunday. Good things like hit Kirk Cousins for a safety on a delayed blitz and amass 12 total tackles on 60 Washington lays. 20 percent of the time Washington started a play, the play ended in Bobby Wagner’s strong arms. Lucky Washington.

• Why can’t Russell Wilson play well in the rain? This is a thing now. And it’s stupid. Wilson had some great plays on Sunday, most of which came in the fourth quarter, but before that he seemed to be targeting Washington’s linebackers on every other dropback. It was weird. Usually inaccurate Russ overthrows his receivers. This week it was the opposite. If Russ can learn to vector in his rainy day performances, that would be great given that he plays in Seattle.

• Is anyone still reading this? It’s a depressing game to read a whole blog post about… but if you’re here I hope you’re wearing your welding gloves because I’m going to drop a hot take: the Seahawks’ running backs were fine on Sunday. The play calling re: running the ball? Also fine! The team ran for 148 yards on 28 attempts. Even taking out Wilson’s numbers they ran for 79 yards on 18 attempts. That’s not great. But it’s fine! The problem was all the penalties. But Eddie Lacy and Thomas Rawls? They were totally fine!

• Duane Brown joined the defensive line in their ongoing protest of police brutality and structural racism in American society. Glad that he’s a new member of the Seahawks both on and off the field.

• Tyler Lockett played really badly on Sunday. He had two catches on eight targets in the passing game and he kept taking the damn ball out of the endzone on kickoffs. Fun fact: Tyler Lockett should never take the ball out of the damn endzone on kickoffs. And yet! Here we are! I’ll forgive him his failures as a receiver if he’ll just take a damn knee. TAKE A KNEE, TYLER!

• God this game… what a mess! What a dumb mess! And the Seahawks still should have won and been in control of their destiny holding onto the two seed in the NFC. Now? Their destiny is anything but in their control (this is TECHNICALLY not true due to their matchups; if they win out they’d at least be assured of a bye). They would be out of the playoffs if they started today! I mean my word!

And now they have to turn around on a short week and play on Thursday night against Arizona. Not ideal! This game is as close to a must-win game as a 5-3 team can face. Get to 6-3? Everything’s okay, there’s plenty of time to correct mistakes and have the offensive line gel before the playoffs. Lose? With the upcoming schedule things get real dicey real fast. Here’s to the Seahawks getting on a solid program of not hitting themselves in the groin starting now.