No, that’s gross. Don’t be gross.
undead ayn rand on November 9, 2017 at 2:58 PM · Report this
2
Since when was Kevin Spacey closeted? I had always just assumed he was gay and was more surprised that he came out as nominally bi than anything else.

That being said, your response is a cop out. Why publish that letter if you weren't going to actually answer it? I find it extraordinary facile to criticize someone's choice (in this case, the apparent choice to 'come out' while apologizing for prior bad acts) without acknowledging that almost any other decision would have been worse.
Sportlandia on November 9, 2017 at 3:00 PM · Report this

That's funny.
Ricardo on November 9, 2017 at 3:05 PM · Report this
4
Sometimes playing devil's advocate can be useful for people to discover their own biases, be forced to explain their position, etc. This is a time where it feels totally unnecessary. I would guess this gay person is very young. Young person, instead of using your energy on wondering why Kevin Spacey coming out was inappropriate, spend your time wondering about why Apple is storing $300 billion overseas to avoid taxes? What am I going to eat for dinner? Does Leanne from Real Housewives of Dallas suffer from borderline personality disorder? Basically, anything but prodding an issue that is entirely unnecessary. Also, stop going on reddit.
eeeeee on November 9, 2017 at 7:09 PM · Report this
5
I love it when Dan says "mah huzzzben"
sandwichesatbedtime on November 10, 2017 at 2:50 AM · Report this 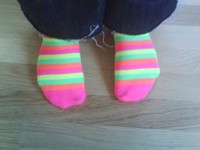 Dan should absolutely keep saying it! When he's not talking to the whole dang world. It's different that Dan says it to all of us, in public. Where in public life do people refer to their spouses by their "affectionate pet name"? Thank goodness Melania doesn't publicly call her cancerous husband "sweetiepie".
curious2 on November 10, 2017 at 6:22 AM · Report this

8
@ 6 - Are you implying he also harassed teenage girls?

@ 7 - Judging from her one and only facial expression when he's around, I highly doubt she's ever called him "sweetiepie" anywhere.
Ricardo on November 10, 2017 at 7:46 AM · Report this
9
I used to cringe when Dan referred to ‘mah huzzzbind” but that was when Terry was just a character in his books — a Stinker-walking, Bjork-listening, stay-at-home pottery-making chauffeur dad. Now that he’s all over Instagram in his Mr Turk suits and Tom of Finland get-ups, it cracks me up.
KCFrance on November 10, 2017 at 1:00 PM · Report this
10
@7, curious2, Pence calls his wife Mother.

12
@8 No, there doesn't seem to be evidence he's harassed girls too. But coming out as a gay man seems a bit odd when there's a different word for people who have relationships with both men and women. Yes I know that's not the main point of this story, and no doubt the bisexual community don't want to claim him any more than the gay community. But still.
elmsyrup on November 10, 2017 at 9:50 PM · Report this
13
I’ve decided that if I am accused of sexual assault or harassment, I am going to say nothing.... nada.... nope!

Because you can admit it, deny it, say you don’t remember it, but whatever the response, it is still wrong.

Don’t get me wrong. I don’t think that what they did is right and I don’t believe the accusers are lying. I just think it’s silly to parse what these guys say. It is never going to be enough or right.
DarkHorseRising on November 11, 2017 at 4:36 PM · Report this
14
@13: Definitely don't give an "apology" where you refuse to apologize.
undead ayn rand on November 12, 2017 at 11:10 AM · Report this
15
Huh. Did someone just tell a person to please not refer to their spouse by the weird nickname/petname they've been using for years? Ok... um... yeah. LW, since you apparently don't have many married people in your life, I'm gonna give you a little piece of advice: they almost all have stupid names for each other. It's just a thing married people do - I don't know why - but they do, so you're just gonna have to make peace with that.
Traffic Spiral on November 13, 2017 at 10:52 PM · Report this
16
For the person who, to my knowledge, coined the notion of rounding oneself up or down to one's primary preference, Dan is being a bit hypocritical about Kevin Spacey "choosing to live as a gay man."

He's bi, but mostly gay, and so has rounded himself to gay. This isn't about whether being gay is a choice, its about whether a technically bi guy who is primarily attracted to men can use language like Kevin Spacey did. I think its legit. In a different context, unclouded by strong emotions, I think Dan would concede that's okay too.

We're in a bit of a McCarthy-ism Salem Witch Trials kind of place in terms of abusive famous men. There is more than a whiff of hysteria going on, and for once, Dan is with the pitchfork and torches brigade instead of calling for nuance and calm.

"Can I show you my dick" is not a rape. Its obnoxious. And being widely respected in one's field is not equivalent to being an employer. Taken to its logical end-point, any man with the temerity to become broadly respected and admired in his profession is ineligible from dating women in his field.

Of course the hysterics will say I'm defending rape culture. Certain hysterics have glitter-bombed Dan in the past, so its rather sad he's forgotten how miserable it is to deal with angry mobs with pitchforks and torches.
Atheism+420 on November 16, 2017 at 6:37 AM · Report this