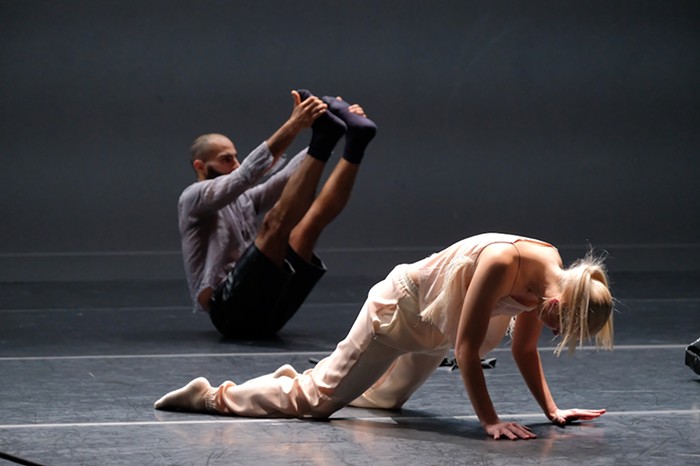 To be fair that is a tremendous boat pose. Stefano Altamura
Sponsored

Dream Dances, which runs at On the Boards through the weekend, comes as advertised. It's a dreamy dance, people! Says it right there in the title.

As such, the show is about as interesting as someone telling you about a dream they had last night. The only difference: instead of describing it with words, they act out the whole thing with four friends who happen to be good dancers.

Though this dream contains a few fascinating moments, a few beautiful moments, a few (unintentionally?) funny moments, and at least one moment of honesty extracted directly from the depths of our collective unconscious, most of the time it just looks like people stretching.

Q: Who among ye shall stand beside the sharp pile of trash? A: It will be I, Thomas House. Stefano Altamura

The dream begins with the house lights on. The stage is bare except for a sharp pile of trash on one side and a giant garbage bag piled up on the other side. Johnny Goss's ethereal electronic loops play almost inaudibly as the dancers, who appear to be sleeping on the ground, begin to move like strands of kelp fluttered by invisible currents. Choreographer/dancer Kate Wallich opens and closes her body like a bivalve, others start to stretch, and David Harvey (whose work I admire) runs through a yoga routine.

(Wallich and her group, the YCs, are the deacons of a wildly popular exercise class called Dance Church, so it makes sense that their show would begin with about five to 10 minutes of stretching.)

Basically they all look like they're just waking up. But instead of waking up to reality, the dancers slowly wake to a mildly strange and increasingly dark dream.

Over the course of the show, the music grows louder and louder, going through airy and aquatic phases before peaking with about seven minutes of heavy metal guitar noises.

Meanwhile, the dancers share a fluid vocabulary but move to the beat of their own weird drums. Lavinia Vago slinks around the stage, mercurial but completely tied the ground. Wallich incorporates basic ballet into her movements, while Tom Weinberger does some impressive leg sweeps. Thomas House walks around like he's a golem obeying the commands of some slightly bored wizard. But the references to yoga never stop, even when the music gets loud and metallic.

For the first three-quarters of the piece, the dancers don't acknowledge each other's existence onstage. They all do their own thing. But then at one point they suddenly turn and face the audience. With wide eyes they slowly back away like scared animals.

This is the moment that got me. Stefano Altamura

Their fear of the audience made me feel like the audience was a thing to be feared. And I guess we were! A bunch of creeps watching five people dream in public. How rude!

There's a real moment of connection there, a real chance for something to be said or done that would in any way kick this thing into high gear, but after a few seconds they all jump back into the dream and let us keep watching. Nothing really changes except for the rules of engagement between the dancers. Weinberger and Harvey quantumly entangle for a bit, and then Wallich and Weinberger physically entangle for a bit, but the relationships are still all cold. They're all still just a bunch of lonely dreamers talking to some God in their heads.

Throughout the performance, House projects a lot of stridently aimless vibes, which ultimately became a source of humor for me, though I think I was the only one laughing. With the determination of a teenage dog he runs into the giant garbage bag, covers himself with it, spins around in it, and then emerges from the experience unchanged, looking like he still has the same questions he had going in. Later on, he comes out of nowhere and runs into the middle of a warped, black kiddie pool that Vago had been filling up with a hose. He stands there for a while, and eventually he sits down in a chair. And that's it. Again, I found this hysterically funny, but I sensed I was alone in this feeling.

I think I was laughing because House's movements most closely reflected my state of mind as an audience member. Because everything looked kind of minimalistic and cool and serious and under control, and because Wallich is a major figure in Seattle's dance world, I was excited to accept whatever Dream Dances had to say. I was eagerly mentally categorizing movements, trying to remember anything I'd ever heard about dream theory, and trying to connect all the metallic imagery with all the watery imagery in some meaningful way. But nothing cohered. At the very least I was hoping for some levity to counter all the self-seriousness, but, save for my humorous interpretation of House's movements, no relief arrived.

Searching for some anchor, I turned to the program. Inside, the writer CL Young quotes Wallich discussing Dream Dances: "I have been deeply interested in duration, line, intersections, direction, facings, repetition, rigorous phrase material, and meditative states," she writes. This is like a carpenter saying "I have been deeply interested in hammers, hammering, nails, joists, different kinds of joists, building a little house out of wood with my skills, and meditative states." These are the raw materials of dance, and so I'd expect a choreographer to be deeply interested in them. But what about the thing that's being built?

She goes on: "With my collaborators, I developed choreographic scores based off of loose narratives derived from various personal dreams that we distilled into improvisations...These improvisations have been remembered, re-worked, forgotten, brought back from memory..." So they sort of practiced dances that came to them in dreams?

Then the show is what it purports to be. Dream Dances is a dream: kinda weird, occasionally emotional, and ultimately forgettable.