Enough About Big Dick Energy. It's Time to Talk About Big Hole Energy. 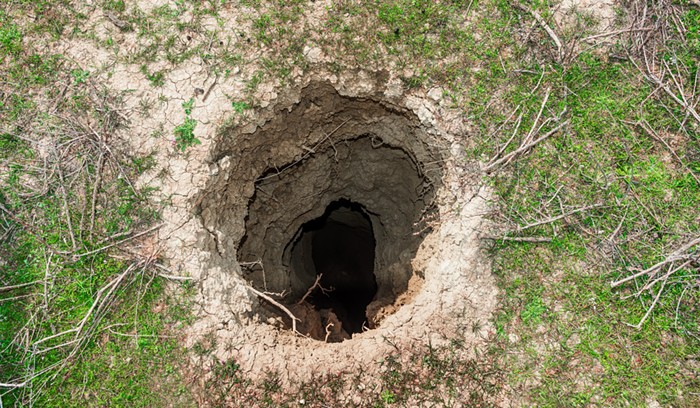 If you haven’t heard about BDE, let me summarize The Discourse. After the death of Anthony Bourdain, writer/comedian Kyrell Grant tweeted that she and her friends were talking about “how anthony bourdain had big dick energy, which is what he would’ve wanted.”

we’re talking about how anthony bourdain had big dick energy which is what he would have wanted
— vampire workday (@imbobswaget) June 9, 2018

A few days later, Ariana Grande insinuated on Twitter that her new fiancé, Pete Davidson, has a 10-inch dick. The tweet was quickly deleted. Later, a photo of the two surfaced in which Ariana looked about as postcoital as one can without actually staggering out of bed to grab a towel. A Twitter commentator ascribed “big dick energy” to Davidson, and the internet went into an uproar.

I was more than content to enjoy the few days in which picturing the dicks of famous people would be culturally sanctioned, when suddenly, everything changed—as it is wont to do—at a dinner with the gays.

My world was torn asunder. Big. Hole. Energy. How could we have been so blind? If it is true that certain individuals possess the kind of energy one might associate with an enormous penis, it must also hold true that some others possess that of an especially powerful and well-traversed hole.

A Vice explainer describes Big Dick Energy as “not mere confidence—though, a true big dick energy-haver is usually quietly confident—nor is it overcompensating. It's a self-assurance that radiates from deep within and can be felt for miles.” Rihanna has Big Dick Energy. Stephen Colbert has Big Dick Energy. That hot animated love interest from Frozen? Big. Dick. Energy.

Conversely, Big HOLE Energy is an X-factor that operates on somewhat opposing terms. If BDE is quiet but unassailable self-assurance, then BHE is its inverse: vulnerable, ostentatious, yearning. It is, as theorist Wayne Koestenbaum would say, “the style of the outsider who has arrived inside but still fears the sentries.” It is the shadow of BDE, separate from, but equally as compelling. It is Britney Spears’ Blackout.

Below I have included a list of individuals that I believe possess BHE. No individual can fully address an issue, but my hope is that this piece helps to begin a cultural dialogue that can lead, primarily, to healing.

J-Dids is THAT girl. It’s hard to know if higher concentrations of BHE have ever resided in one individual. Her lab reports indicate that her BHE midi-chlorians are off the charts. Didion is famously a nervous wreck (in The White Album, she literally includes her psychiatric evaluation in one essay) who is also deeply unafraid to call bullshit on anything.

In 1979, Ms. Didion (if you’re nasty) wrote a scathing takedown of Woody Allen in the Paris Review. In particular, she addressed his films Manhattan, Interiors, and Annie Hall, but of course the queen of New Journalism couldn’t stop herself from undressing his entire legacy. She basically called him a self-absorbed child, said all his characters seem like awful people, and derided his entire oeuvre as the product of an emotional-stunted douche. Of course, some guy got mad and wrote an irate rebuttal. Didion’s public response when asked to comment: “Oh wow.” Big Hole Energy. HUGE.

All nelly femmes with Broadway fixations have BHE. I will not litigate this point any further.

She LITERALLY wrote a song about living in her sister’s shadow! This is the vulnerability I’m talking about, people! She gave us nothing but bangers, and we spit in her face, and guess what? She’s still flourishing. That is Big Hole Energy.

Conventional wisdom and hack comedians would have you believe that Bert and Ernie are the gayest residents of Sesame Street, but that is erasure. In reality, the biggest fairy on the block is Big Bird. Think about it. Of course the media fawns over thin, cisgender, assimilationist gays who live together in an apartment and maintain a monogamous relationship. Bert and Ernie have been allowed to dominate the narrative because they are unthreatening. Big Bird, on the other hand, is a radical, nonbinary queer who has spent their career turning an ICONIC, high-drag look. Why you gagging so? She brings it to you every episode.

But of course, because Big Bird refuses to conform, they are ignored, mocked, treated as a joke. Their long history of activism is erased. They don’t fit in with the muppets OR the birds—because, unlike the other birds, they are big—yet still they press on. This is the exact union of strength and vulnerability that defines BHE.

“My hands are small, I know/ but they’re not yours, they are my own.” Heavy shit. Also Jewel lived in her car while trying to make it in Hollywood! Now that’s what I call MASSIVE Hole Energy.

This is self-evident I believe.

According to historians, one of the first confirmed cases of BHE was Oscar Fingal O'Flahertie Wills Wilde, the ur-Good-Judy. This queen did it all: wrote a bunch of good shit, became a style icon, probably fucked Walt Whitman, and had a stint in the clink for s-ing the D. Wilde was the premier wit of his day and a celebrated writer and still he yearned for acceptance (the yearning is key to BHE; not all gays possess it), which is probably why he decided to sue the Marquess of Queensbury for calling him a homo. This, in turn, set off the investigation that would eventually land him in prison on charges of sodomy. If that isn’t a life brimming with BHE, I don’t know what is.

OK, OK. HEAR ME OUT. I know that instinctively one might think of Oprah as a textbook case of BDE, but I would argue that Oprah’s power is predicated on her radical vulnerability, ergo Big Hole Energy. Oprah has been through the fires of hell and has arrived on the other side better, stronger, and with a garden of gorgeous vegetables. We love her because she has triumphed over hardship and because she has utilized her experiences to teach the world. I rest my damn case.