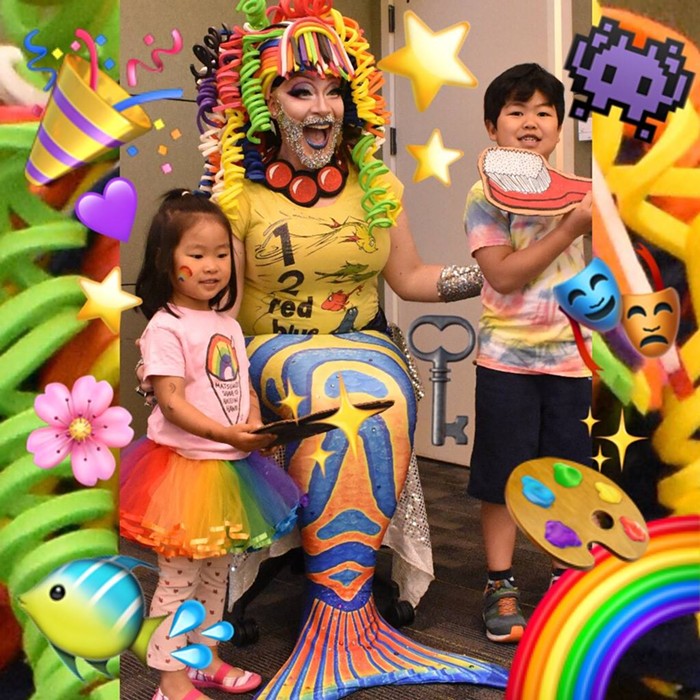 Sparkle Leigh, the colorful mermaid center, was the target of a conservative rant for a Drag Queen Story Time she didn't even host. Courtesy Sparkle Leigh
Sponsored

It appears KIRO's Dori Monson likes everything but his facts to be straight.

The conservative radio host and Alex Jones doppelgänger took to his radio program Monday afternoon to bemoan "one of the most depressing things" he's ever heard in his entire life: Drag Queen Story Time.

After joking that he is a "hepcat" who likes "seeing stuff in the world change for the better," Monson rage-shouted about a local Drag Queen Story Time event at the Renton Library, calling it "straight-up propaganda" that could turn toddlers trans and result in teenage suicides. Monson:

I watched a great video this weekend about how all of these adult social issues are being fought through our kids. And it’s not healthy, it’s not emotionally healthy. Have you seen the suicide rates for transgender kids? They’re high. And there are two possible approaches for that. One is to have drag queens telling our kids stories when they’re 2 years old, and then our kid will decide to be one.

Once you’re 18, do whatever the heck you want. But to have our government, our public libraries, take this issue and decide to put it out there for children is straight-up propaganda.

The rant is irritating and insidious. A drag queen reading books to children is story time, not "propaganda." Claiming it as such is something that happens in Russia—and, apparently, Renton. It is a page out of Vladimir Putin's and Alex Jones's playbooks. The claim is lazy, hateful, and, in Monson's case, not only morally inept but factually inept.

Monson says that the queen in question was "a well-known local drag queen, Sparkle Leigh." But Sparkle Leigh wasn't even at Renton Library's Drag Queen Story Time on Monday. Leigh, the victim of a hit and run incident last April, was in Cincinnati with family recovering from her "post-concussive symptoms that may still linger for years or be chronic," Leigh told The Stranger Monday evening over Facebook messenger. A replacement, Thadayus & the Electrofunks, took her place that day.

But this isn't Monson's only mistake.

Monson's main gripe with the event, besides the King County Library System finding it "somehow appropriate to indoctrinate children," was his belief that his tax money was supporting the programming. At his most frustrated moment during the segment, Monson exploded, à la Alex Jones: "CAN ANYBODY IN THEIR RIGHT MIND EXPLAIN TO ME HOW OUR TAXPAYERS ARE PAYING FOR DRAG QUEEN STORY TIME AT THE RENTON LIBRARY?"

Yes! Jared Mills, a Seattle librarian and one of the originators of Drag Queen Story Time at the Seattle Public Libraries, clarified the situation for The Stranger: "TAX DOLLARS DID NOT PAY FOR THAT."

Mills says the event, sponsored by the Friends of Renton Library, is supported by donations, which is clearly stated on the event listing where Monson presumably found Sparkle Leigh's name. The King County Library System's page for the Renton Library goes on to state that Friends of the Renton Libraries pay dues and raise money through book sales and other fundraisers.

“There’s so much wrong with how this story was reported. Sparkle wasn't even there yesterday,” said Mills, who is also a drag performer and has hosted drag events for kids along with her partner, drag queen Cookie Couture. (Contrary to what Monson spouts, the two are great parents to four children—which, after covering the drag scene this past year and getting to know them, is something I can personally vouch for, but I'll defer to the literal award they won for parenting.)

"If there's one person who deserves rainbows and sparkles it's Sparkle Leigh," Mills continued. "I worked with her to develop the curriculum that I've taken to other libraries. Locally and nationally, she's been instrumental in pushing for more Drag Queen Story Times. She's a light, and I feel her absence from the scene every single day," referring to Leigh having to go back to Cincinnati due to complications stemming from her hit and run. The incident happened as Leigh was leaving R Place in drag after a performance, and Leigh believes it was a hate crime.

"It's obvious Dori doesn't even know much about drag or the LGBTQIA+ community," Leigh told The Stranger. "And that's not okay in a perfect world, but what a great open door to have dialogue about programs like this and why they are important."

Across the country, conservative windbags are ringing the alarm bells over Drag Queen Story Hours like they did with trans people using public restrooms, and it's happening here, in King County's blue bubble. But Seattleites aren't just clutching their pearls over drag queens reading in libraries. In April, former Stranger intern Tess Riski published reporting in The Spectator that revealed a Seattle U English professor pulled copies of the university paper from newsstands because of an "indecent" photo of a drag performer on its cover. When reached for comment, Seattle U's President admitted to being "very, very ashamed" of the photo.

But despite all this hostility over people wearing wigs, Sparkle Leigh is forgiving of Dori Monson. "All that I would ask is that we all be more kind," said Leigh. "Kids need to see that more—heck, we all do."

Of course, had Monson actually gone to the event, he would have noted that Leigh wasn't in the building, let alone the state. He also would have noticed a packed library full of happy parents, like these parents, who said they go to Drag Queen Story Time because they're "looking for exposure to positive role models in as many forms as possible."

"I've been a children's librarian for years and years and story time is the most impactful thing you can do for your kid," said Mills. At Drag Queen Story Time, "parents learn techniques and tricks and structure for how to do that and continue that with their kids. It's not about indoctrinating folks into being queer or gender nonbinary. It's about not judging people. Full stop."