Cryotherapy Works for LeBron James but Not for Me 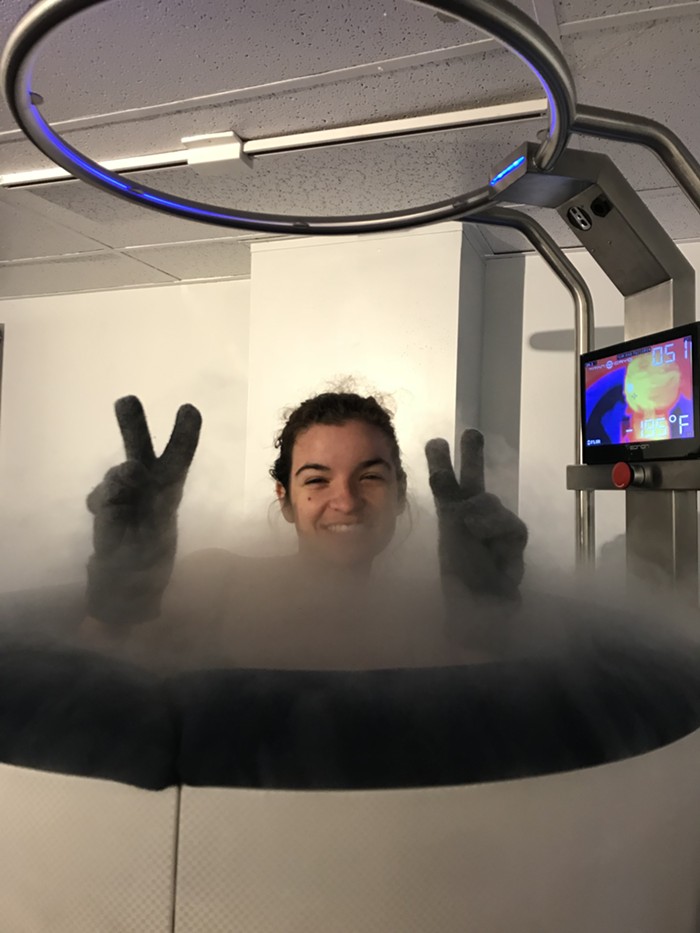 Tell me how my ass tastes, Walt.
It was the morning of the first dreary, cold day of fall. The air had a bite to it and, as I walked outside, what was light Seattle spit turned into all-out actual rain. I got in my car, dreading the drive. My car had been windowless since somebody smashed it to pieces in July. My trek down Lake City Way was wet and cold. The day would only get colder.

I mapped myself to a mall off Bothell Way, where Glacial Cryotherapy had opened its doors a little over a month ago. It’s run by two women, Kathy and Nicolle, who met when their children dated for three years in high school. The two discovered cryotherapy about two years ago. They were so taken by it, and the way it positively impacted their lives, that they opened up their own business. Their children are no longer together, but they’re good friends.

First of all, cryotherapy is not—to my disappointment—the same thing that has Walt Disney’s frail, anti-Semitic ass entombed in ice. That’s what the maintenance guy thought when Glacial Cryotherapy opened in the shopping center. He was relieved when he found out Nicolle and Kathy weren’t storing dead body parts in ice in quiet Lake Forest Park on the edge of Shoreline.

“LeBron James swears by it,” is a phrase that could probably sell anything. That’s a big draw for cryotherapy wherever people do cryotherapy (spoiler: it’s mostly in Los Angeles and New York). It’s a new health fad originally popularized by athletes like James and celebrities like Mark Wahlberg, who listed entering “the cryo chamber” every day on his daily routine.

Though not a professional athlete, I had played in an adult-league recreational soccer game the night before. I live a largely sedentary lifestyle save for those weekly games and, I noted with a groan as I waddled up the steps in the mall, I definitely needed whatever solace cryo had to offer more than LeBron ever has. Probably.

Cryotherapy is a glorified ice bath. The goal is to reduce inflammation in sore muscles, hence the athlete hype. It’s also used by a lot of people with chronic pain like rheumatoid arthritis. Except they use liquid Nitrogen, not ice cubes. The process is supposed to draw all the blood in the body to a person's core, and once the treatment is over, freshly oxygenated blood is released throughout the body.

Nicolle told me doing cryo had helped with her anxiety. It’s also good for boosting the ol’ immune system. Flu season defense, anybody? Kathy chimed in that she had never slept better than after doing cryo.

“You’ll have the best sleep of your life tonight,” she said to me. I nearly salivated. I am so tired.

A huge, silver cylinder tucked against the far wall is the centerpiece of their facility. It has a chrome circle above it, like a halo, or a Star Trek transporter. Nicolle showed me to a dressing room where I was to strip down to my underthings, put on thick wool mittens, socks, and rubber slippers. There were beanies, but only for the faint of heart. Meanwhile, she got things going.

When I stepped back outside, folded into a robe and wearing only gloves and socks like a nudist Mickey Mouse, the machine was alive. Dense, white fog was frothing from its top. It was the cauldron and I was about to complete the witches brew. I worried as the temperature displayed on an electronic screen—already at -166 degrees Fahrenheit—dropped. Quickly.

“Okay, let’s get you in,” one of the ladies said. The door opened. I was Jon Snow and winter was here, damn it.

I stepped in and felt like when you open your freezer to rifle around for your Trader Joe's gnocchi and the cold, dry wind blasts on your face. Except it wasn’t my face, it was my whole body.

Nicolle was there the whole time telling me what to do for the two minutes I was allotted in the chamber.

My whole body felt cold, but, somehow, despite the temperature inching toward -200 degrees, it wasn’t bone-chilling. I felt mostly fine. I would have felt worse if I had jumped into a cold pool or was faced with a completely-cold shower. My arms were crossed, my elbows kissed by the wool of my gloves, and my feet were together. I moved whenever Nicolle told me, first facing forward, then the side, then back, you get the idea.

Beam me up, Scotty.
The cold seeped into my knees when there were 30 seconds left. I could feel my skin tightening, the air like needles. I wasn’t sure if I was going to make it. But, when I finally stepped out, my two minutes elapsed, I felt great. My cheeks were warm, my legs a little numb, but mostly I felt giddy. I wanted to do it again.

“Euphoria is a common side-effect right after,” Kathy had mentioned.

Like everything, the Glacial Cryotherapy ladies said, cryotherapy takes multiple sessions in order to actually notice results. The first session is $35 and every time after is $65. They sell packages, including a student package that is being snatched up by student athletes. Additionally, the facility offers an infrared sauna (“it heats you from the inside?” I asked, perplexed. “Yeah, it’s infrared,” Nicolle replied matter-of-factly), compression therapy, and localized cryo for any specific aches and pains or for that just-skiied-a-black-diamond facial glow.

Glacial Cryotherapy is the only cryotherapy facility north of downtown that's not on the Eastside. People further north come down for treatment and the facility aims to stay open to accommodate their needs.

I wanted cryo to work. I wanted my joints to be lubed up and ready for another intense rec soccer game, but I didn’t feel much different after. Instead, I just felt cold the whole day. My soreness abated mostly two days later, but I’m not sure if that was cryo or just nature. I also didn’t sleep very well that night despite my weariness, but that could also be because sharing a bed is for chumps and my boyfriend is a sauna (non-infrared). But, I'm a first-time user and, despite my assertions otherwise, not the target consumer. Either way, I was so miserable on the drive home that I finally stopped to get my car window fixed. It still doesn't roll down, but at least I have a window. Maybe that’s all I can ask for.