A Beginner's Guide to Drinking Beer at Mariners Games 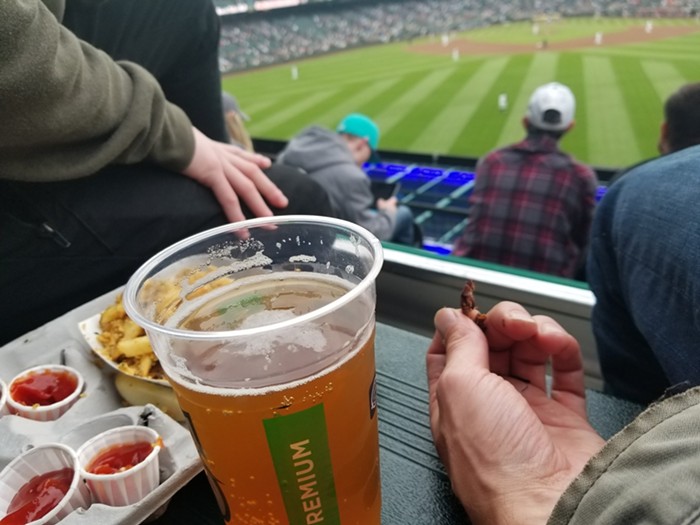 Fried crickets and Georgetown's Bodhizafa can turn a Mariners loss into a win. Lester Black
Beer has always been an integral element of baseball, but there’s no place in Major League Baseball where beer is more important than at Mariners games. The Mariners are a dreadful baseball team. We haven’t made it to the playoffs since 2001, the longest playoff drought for any team in the MLB, NBA, NFL, or NHL. But luckily for us Mariners fans, our team might be terrible but the beer at their games is not.
Sponsored

In fact, the beer at Mariners games might be the best in the entire country. You can get barrel aged beer, amazing IPA, sexy lager, and even cask ale (!) from some seriously great local breweries. There are over 30 different types of draft beer available at each game, but each individual beer is only sold at a couple of different locations. That means you need to know where to look. It also makes for a great distraction for when the Mariners are losing. Tired of watching a Mariner strikeout with two men on base? Let’s go to section 185 for a Chuckanut Kolsch! Can’t stand watching a reliever blow a 5-run lead? Sounds like a trip to The Bullpen bar to get a Breakside Pilsner is in order.

There’s also a lot of terrible, fake craft beer being served at Mariners games. That’s where I come in. I’ve obtained the list of beers on tap at T-Mobile Stadium and grouped them based on beers not to be missed, beers that are good, and then corporate beer that tastes like trash and should be avoided. To find out the current location for each tap use this MLB beer finder website.

Your first stop for great beer should be the specialty beer station in Section 129, just behind home plate. This is the kiosk where you can find cask ale, the delightful, naturally-carbonated English style of beer. Cask beers are wonderful and this year’s cask program will feature a rotating list of beers from Reuben’s, Maritime Pacific, Sumerian, Diamond Knot, Double Mountain, Stoup Brewing, and Machine House.

In addition to cask ale, the specialty beer station will also serve a rotating list of sour and barrel-aged beers that will rotate constantly. They haven’t announced what specific sours will be on tap, but the rotating list includes Stone Brewing, Samuel Smith's Brewery, Founders Brewing, Crooked Stave, Black Raven Brewing, Big Sky Brewing, and “many others.”

Now, let’s get drunk and forget we are Mariners fans.