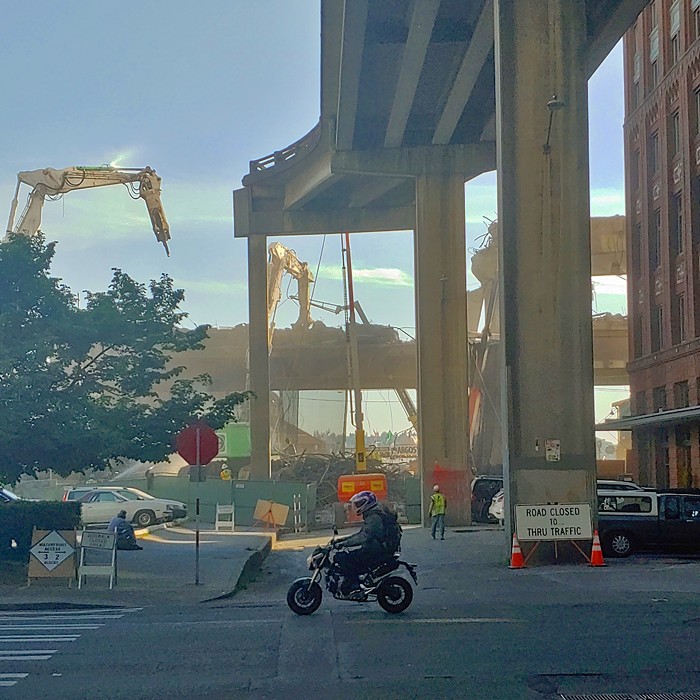 A dark angel of Seattle... Charles Mudede
On Thursday, I found myself, after walking down Post Alley, crossing a street that had a perfect view of the men and women and machines destroying the viaduct. I took a picture of the blasts of water and dusty light with my phone. At the moment I pressed the virtual button, I captured, by accident, a man or woman on a small motorbike at the best point possible: just below a flyover that now goes nowhere. Also, the helmet worn by the biker added to the image's post-future effect. This looked like a scene from the 2000 TV show, Dark Angel.
Sponsored

That short-lived show—which was produced by James Cameron, starred a very young Jessica Alba, and was set in the same year as Blade Runner, which is also the year we are now in, 2019—imagined a Seattle that, like the rest of the US, was reduced to Third World status because of a banking crash caused by a terrorist action in cyberspace (this theme was rebooted by USA Network's 2017 show Mr. Robot). But as I said in another post, the real Seattle has in one sense crossed into the mirror of the future presented by Dark Angel.

The fact of this real meeting its reflection, and entering its other's side is made abundantly clear by the explosion of the city's homeless population and its ever-expanding mobile slums of RVs. And so we arrived right on time in 2019. But we do not have, as in Dark Angel, one Third World. Instead, we have a Third World that's right next to a First World, a fact that rattled the reporter in KOMO's awful documentary Seattle Is Dying.

But why is the city not one world? How is it possible that distinctions that once characterized nation-state space now define the class composition of this and other US cities? What Dark Angel got wrong was the demise of the financial sector. It imagined tech-savvy terrorists would break US's financial sector, but, instead, it's the other way around: finance breaks people, directly and indirectly. Many of these people are on the streets. They live in the post-apocalyptic city. Beyond the rubble beneath the viaduct in my image, we can easily imagine the tents of the homeless.

I now want to turn to something else that is admittedly theoretical. The image also brought to my mind an idea proposed by another 17th century philosopher, the courtier Gottfried Leibniz. His metaphysics maintained that the world we live in is the best of all possible worlds because God realized a world with possibilities that are compatible with the greatest possible number of possibilities. And so, for a possibility to efficiently become real, it must be compossible—in agreement with other possibles. He wrote in the brief piece "A Resume of Metaphysics" that from "the conflict of all possibles demanding existence this at least follows, that there exists that series of things through which the greatest amount exists, that is, the maximal series of all possibles."

Compossibles are what determine what can pass easily into the reality of a given culture. And so, with capitalism, a cultural form, it strives to realize what is compossible with its conatus, to use a word made famous in Western philosophy by Leibniz's contemporary, Spinoza. (Conatus is the striving "to persevere in being.") Capitalism's conatus is, of course, making money always make more money. What ever is consistent with that striving will come into its form of existence. Our mistake is to confuse compossibles that maximize the reality of nature (or, put another way, God), as Leibniz imaged it, with those that maximize the existence of a culture (in this case, capitalism).

There are, of course, other possibilities in the virtual (and here I'm borrowing, but slightly altering, the word as used by the late-20th century French philosopher Gilles Deleuze), but many of them are incompossible with the endeavor of the infinite growth of a form of social power that's represented by money. Many of these incompossibles are eliminated long before they can be realized. Some incompossibles, however, do get out, such as public transportation; but the dominant reality of the culture works ever so hard to force them back into the realm of the virtual. Also, the possibles that are compossible with something like public transportation (dedicated bus lanes, low fares, high frequency, and so on) are prevented from becoming real, and so the possibility that became real is weakened by isolation. The real is only strengthened by the increased realization of the possibilities it is compatible with.

I feel that Leibniz's metaphysical concept can be applied not only to a critique of capitalist futurology, but also to a much-needed critical theory of urban transportation.