If Liberals Want to Change Minds on Abortion, We Must Understand Why People Oppose It 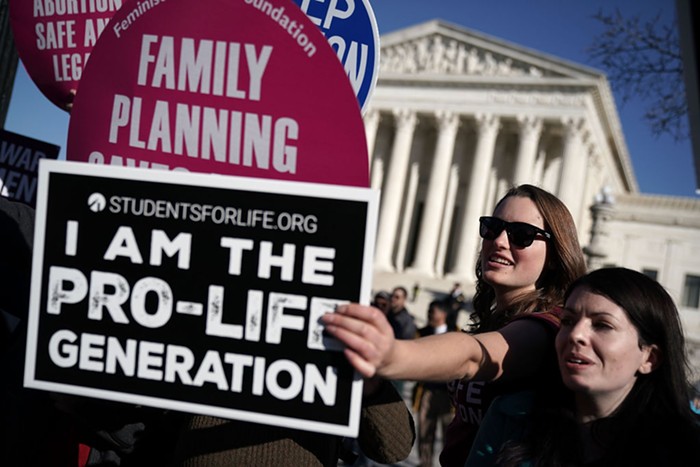 Scenes from the culture wars. Alex Wong/Getty
On Monday, Georgia’s Republican Governor Brian Kemp signed the strictest abortion bill in the country. This new law will outlaw abortion after a fetal heartbeat can be detected, which is generally around six weeks after conception—a point at which most women don't even realize they are pregnant. The law is scheduled to go into effect in 2020, if it stands up in court.
Sponsored

Not to be outdone, the next day, the Alabama State Legislature passed an even stricter bill, one that will outlaw abortion entirely unless the life of the mother is at risk, with no exceptions for rape or incest. It will also punish doctors or others who provide abortions by up to 99 years in prison.

These are both very, very bad laws. Not only will more people be forced into pregnancy and parenthood before they are ready, pregnant women will also, quite literally, die. That's what happens when women don't have access to abortion. According to the World Health Organization, there are around 25 million unsafe abortions a year, mostly in the developing world where abortion is either inaccessible or illegal, and these abortions result in complications for an estimated 7 million women. And complications can include death: The WHO estimates that between 5 and 13 percent of maternal deaths are due to unsafe abortions.

This trend to criminalize abortion is spreading: Utah, Ohio, and Kentucky, Arkansas, and Mississippi have all recently passed abortion restrictions, and it's likely to be a major issue in the coming presidential election.

Ironically, women are more likely to experience unplanned pregnancy in states that mandate abstinence-only sex education, where birth control is difficult to access, and where governments fail to provide basic support for families like health care and early childhood education—states, in other words, a whole lot like the ones currently pushing to criminalize abortion.

But as destructive as these laws are, they're also strategic. The intention of laws like Alabama's is to provoke lawsuits—which they already have. Not a day after Alabama lawmakers passed this draconian legislation, the ACLU and other groups announced they'd be taking the state to court. And if this case makes its way to the Supreme Court, conservatives are hopeful it will lead to the overturning to Roe v. Wade now that the bench is stacked in their favor. Once a Moral Majority fever dream, the criminalization of abortion is almost within conservative reach.

Liberals are terrified of this possibility, for good reason. Abortion is a common and essential procedure in women's health, and it always has been. The first recorded evidence of abortion goes back to Egypt in 1550 BCE and I'm willing to bet that women have been inducing miscarriage since they figured out how to do it, from fasting and bloodletting to pouring hot water on the abdomen. Unplanned pregnancy is a part of the human condition, and no law can change that (although if I got my way, all humans would be temporarily sterilized at puberty and pregnancy would be opt-in instead of opt-out).

To many on the left, anti-abortion laws are just another patriarchal attempt to control women's bodies. The Alabama Senate, for instance, only has four women, and three of them voted against the law (the fourth was absent). As Bernie Sanders wrote on Twitter, "These hypocrites decry 'big government,' yet they want to control every aspect of women's bodies, private decisions, and futures." Or, as Twitter-famous OB/GYN Jennifer Gunter put it, “There is no moral issue with abortion. Anyone who thinks their [sic] is has developed their ethics in a patriarchal society and has yet to break free from that oppression. It benefits men to control women’s bodies.” To her, and to many other feminists, it’s a black and white issue: If you aren’t pro-choice, you’re simply trying to control women’s bodies and that’s that.

However, when you look at data, this picture gets a little more complicated. According to a 2018 Gallup survery, Americans are evenly divided on abortion: 48 percent of respondents said they were pro-choice; 48 percent said they were pro-life. That's not too surprising: Abortion is one of the most divisive issues in the country, and the numbers have been relatively stable over time. What is surprising is the breakdown by sex, because there are nearly as many women who call themselves pro-life as there are men. Forty-nine percent of male respondents said they were pro-life and 47 percent of women agreed with them. And this includes women in power: The Alabama representative who introduced this anti-choice legislation, is, herself, a woman, as is Governor Kay Ivey, who signed the bill into law on Wednesday afternoon.

Of course, you could tell yourself that the 47 percent of women who oppose abortion have been gaslit by their husbands, who secretly hate women and want to control their bodies. Plenty of people repeat this platitude as though it were fact. But is actually true? The only way to find out, I figured, was to actually ask a pro-life woman myself.

Marlene Jaeckel is a software engineer in Atlanta with a background in biology and medicine. She's also conservative, Christian, and, for the most part, pro-life. This is a relatively new position for her. She was raised Christian, but lost religion during graduate school and said she was an atheist for the next 18 years. During this period, she was also pro-choice. "From studying science, I knew that a blastocyst [an early cellular structure that forms after an egg is inseminated] isn't a fetus," she told me. "The first four weeks after conception, there is no heartbeat or no brain activity. I didn't see that as life."

And then, she suffered some personal losses, including the deaths of people she loved. “It was kind of an organic process, but I started to feel like I need more purpose and meaning,” she said. “I know the atheist argument is that you can have meaning in life without religion, but I turned back to a lot of the things I learned as a child." (When I asked how, as a scientist, she could reconcile the lack of empirical evidence for the existence of god, she said she doesn't really have an answer: "I see a universe that is so incredibly magnificent in the way it's created—the biological processes behind it, the physics behind it, that I want to believe that there is a bigger creator that came up with the logic. I can't prove it, but I want to believe it." In other words, it’s not reason. It’s faith.)

Marlene’s renewed belief in god changed her perspective on abortion. While she still opposes total bans on abortion and fetal heartbeat bills like the one that passed in her state, she now considers herself pro-life. And for her, opposing abortion is not about controlling women's bodies at all. It’s about what conservatives often call the “sanctity of life.”

For many pro-lifers, this stance is situational. They oppose abortion but are just fine with the death penalty. This moral inconsistency, to Marlene, is a problem, but she, at least, is resolute in her beliefs: both the death penalty and abortion are taking a life.

"People really do believe it's murder," she said, "especially in the South. People think it's a divine plan. No matter the circumstances that lead to the pregnancy, the second that pregnancy happens, it's god-given life."

And this, I think, is important to acknowledge, because if Democrats and leftists want to protect the right to get an abortion, it's way past time that we start grappling with why exactly conservatives oppose it so much. And it’s not like they haven’t told us: It's on the pamphlets they pass out in front of Planned Parenthood and the bills they pass into law: Life begins at conception, and ending that life is an act of murder.

I don’t agree that abortion is murder. In fact, I think it's more unethical to step on a spider than to end a pregnancy early. But I also believe that for many pro-lifers, the idea that abortion is murder is genuinely and deeply held. It's what they've been told their whole lives, and I don't think it's an excuse manufactured by some patriarchal agenda to cover up the real reason for their opposition. Why? Because they say it, over and over. "Abortion is murder." It's right there on their signs, and if we on the left want to change people's minds on this or any other issue, we have to understand what they actually believe instead of some cartoon villain version of what they think.

It’s not easy to change people's firmly held beliefs, but it can and does happen. Take gay rights. In the late ‘80s, only around 10 percent of Americans thought gay people should have the right to marry. By 2002, that number had gone up to 30 percent. Today, over 60 percent of Americans support same-sex marriage. This massive shift didn’t occur because activists told people who were opposed to gay marriage that they were wrong or bad or were actually trying to control people's bodies. It happened because gay people started coming out to their family and friends. That’s what changes people’s opinions: actual human connection, not lectures from people you disagree with in the first place.

The same shift can happen when it comes to abortion, especially as older, more conservative generations die off and as religion plays a smaller role in civic life. In Ireland, for instance, only 23 percent of respondents in a 1997 survey by the Irish Times were in favor of legalizing abortion. In 2018, that same country voted to repeal the ban on abortion by over nearly two-thirds of the vote.

Some people, of course, are hardcore antichoicers who will always believe that abortion, in all cases, is murder and there should never be any exceptions. But there are far more people like Marlene, a woman who is broadly pro-life, but also favors some legal exemptions. According to Gallup's 2018 survey, 71 percent of even pro-life Americans support abortion if it protects the life of the mother. Fifty-seven percent support abortion in cases of rape or incest. This, if liberals want to change pro-life minds—and elect pro-choice leaders—is where we need to start the conversation, because this claim that the opponents of abortions are all misogynistic men or brainwashed women attempting to control women's bodies isn't just unsupported by the data; it's also not going to help.