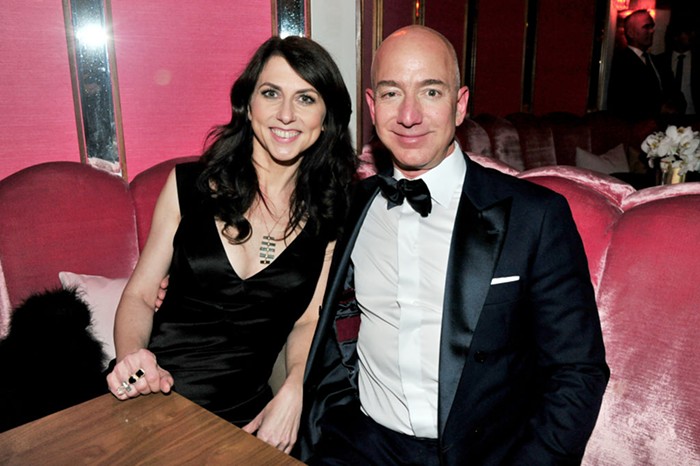 America's richest exes Jerod Harris/Getty Images
On Tuesday, newly minted single lady Mackenzie Bezos announced that she'll be giving away at least half of her fortune by signing the Giving Pledge, a campaign founded by fellow rich guys Bill Gates and Warren Buffett. As of this month, the Giving Pledge has 204 signatories—most of them billionaires—for a total of $500 billion committed to charity.
Sponsored

Bezos has not announced where, exactly, her money will be going, but in a letter posted on her website, she wrote, "We each come by the gifts we have to offer by an infinite series of influences and lucky breaks we can never fully understand. In addition to whatever assets life has nurtured in me, I have a disproportionate amount of money to share. My approach to philanthropy will continue to be thoughtful. It will take time and effort and care. But I won’t wait. And I will keep at it until the safe is empty."

This is good news. Bezos, who is worth an estimated $36 billion thanks to her marriage to/divorce from Giant Balls Jeff, is one of the wealthiest individuals on the planet. And she’s sure as shit more generous that he is: While his biggest philanthropic effort has been releasing his own sext messages online, the former Mrs. Bezos actually seems committed to giving her wealth to charity, and for that I applaud her.

But, here's the thing: This level of philanthropy is made possible by tax structures that prize the wealthy over everyone else. And it’s getting worse. As Rob Reich, the author of Just Giving: Why Philanthropy Is Failing Democracy and How It Can Do Better, told the Stanford News, "In an age of massive and rising inequality, we also see rising levels of philanthropic activity among the very wealthy. The two go hand in hand." Mackenzie Bezos can give away $36 billion because she's got $36 billion to give.

The Giving Pledge is excellent PR (which is why signing it was a plotline on Billions) but it’s not exactly legally binding. It's a promise, sure, but there is nothing to keep Mackenzie Bezos or anyone else from taking the good press and later reneging on their commitment. And this is part of the problem with relying on the goodwill of rich people to fund necessary causes. All too often, charitable giving and private foundations become tax shelters for people with assets.

Take, for instance, the Trump Foundation, the so-called "charitable arm" of the President's supposedly massive family fortune. In 2016, Trump claimed that he’d given $102 million to charity from 2009 to 2016, but reporting from the Washington Post found that he hadn't contributed any of his own money to that fund. The Trump Foundation also, memorably, purchased a $10,000 portrait of Trump himself, which Trump then had installed at one of his hotels in Florida. Last year, it finally shut down as part of a criminal probe by New York's attorney general. Barbara Underwood, the New York AG, accused the organization of “functioning as little more than a checkbook to serve Mr. Trump’s business and political interests.” And yet, it was still a tax-deductible not-for-profit.

Clearly, there are plenty of shit foundations and charitable organizations out there, and rich people use them to channel their wealth into their own pet causes. Take, for instance, billionaire film magnet David Geffen. In 2015, Geffen gave $100 million to UCLA so they could build a private school for the children of UCLA faculty, called, naturally, the Geffen Academy. While funding education is a fine and noble cause, are the children of UCLA professors really the population that needs better private education? Or look at Seattle's most generous couple, Bill and Melinda Gates. While the couple has done plenty of good work in the world—their donations may actually end malaria deaths in the developing world—they also helped fund a disastrous effort to reform public schools. Their donation, of course, was tax-deductible, but it also ended up costing participating schools at least $575 million.

Charitable contributions may benefit the recipients and the donors, but for the rest of the public, they don't do much good. Because charitable contributions are tax deductible, when people donate, taxes bill goes down. That doesn’t, however, mean the need goes away too, so when wealthy people make deductions and take write-offs, either the rest of us are on the hook to fund essential public services or those services end up going unfunded. In fact, according to the nonpartisan Tax Policy Center, every $1 donated to charity by the top one percent of money makers results in a loss of 32 cents in federal tax revenue. Of course, rich people could decline to take the deduction for charitable donations, but most of them don't.

I'm glad Mackenzie Bezos, unlike her husband, has committed to doing something more useful with her fortune than colonizing uninhabitable planets. But what would be better than Mackenzie Bezos donating her fortune would be billionaires paying more in taxes instead—especially Mackenzie's ex-husband, who located his business in Washington state to take advantage of our regressive tax laws and has spent his significant political capital fighting efforts to reform city and state tax laws.

Right now, billionaires like the Bezos are paying less than their fair share of taxes. That, however, could change someday soon. Elizabeth Warren, for instance, has proposed a 2 percent wealth tax on those who have over $50 million in assets and a 3 percent wealth taxes on those worth over $1 billion. This, according to the candidate, would raise $2.75 trillion in about ten years, and that's money that wouldn't go just to the well-heeled children of UCLA faculty or whoever else manages to flatter billionaire egos enough. It would go, instead, to parents with kids in daycare, to students with college loans to pay off, to special education programs, to people with no place to live, and to regular old Americans who don’t have the good fortune of attracting a Bezos. Giving money away is all fine and good, but paying your taxes is the pledge we really should be saluting.

Most Popular in Slog