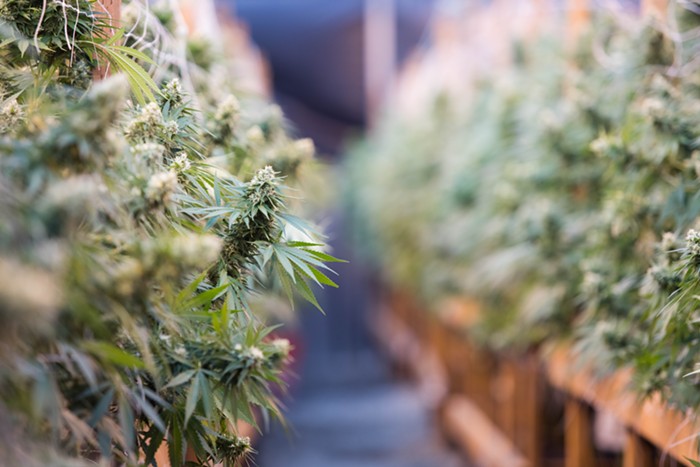 Will Washington's legislature encourage minorities to own legal pot farms like this one? Lester Black
Pot legalization has followed an unfortunately ironic path in Washington State. For years, Washington's minority communities were the most oppressed by our government's war on drugs. Our state was the first to correct the injustice of prohibition, by legalizing pot, but the legal weed industry in Washington has almost exclusively benefited white-owned businesses. White people were by and large the least harmed by prohibition and then quickly became the group that benefited the most from legalization.

That may soon change, at least slightly.

The state’s top pot regulator, the Liquor and Cannabis Board (LCB), announced last month that it wants to create a new $200,000 fund to help disadvantaged communities get into the industry and it wants to issue new retail licenses to minority business owners. Then today, the state’s most powerful trade group issued a proposal for the state to create a second fund that could offer low-interest loans to people from disadvantaged communities to start pot businesses.

All three measures would need to get approval from the state legislature, which reconvenes in January of 2020. That means if lawmakers agree, hundreds of thousands of dollars could be headed toward making Washington’s weed industry slightly less white.

Let’s start with today’s news. The Washington CannaBusiness Association (WACA) just released its two-part proposal for boosting minority ownership of pot businesses. First, the state would legalize out-of-state investment in the pot industry. Currently, only individuals who reside in Washington can put money into a pot business. Second, a 1 percent fee would be tacked onto any investments over $500,000 in pot businesses, and that fee would be put into a fund that provides low-interest loans to minority business owners.

WACA, which includes most of the state’s largest pot businesses in its membership, has been calling for out-of-state investment in the industry for years, but this is the first time they proposed pairing access to out-of-state capital with a diversity fund. By putting the two together, the group might subdue some of their critics, who have said that out-of-state capital would help only the largest pot businesses in the state get even larger.

Vicki Christophersen, WACA’s executive director, said on a call with reporters Monday morning that the proposal would boost minority ownership “in a very real way, not just talk about but actually provide access to communities that have been historically underrepresented.”

Christophersen did not have an estimate for how much the fund would raise but said given the interest in investing in Washington she thought “this fund will create significant revenue.”

Critics are likely to point out that WACA is attempting to right one wrong of the industry—that minorities don’t own businesses—by also giving their own companies millions of dollars in capital. Why only 1 percent fee, and not 10, 20, or a 50 percent fee? Christophersen said the 1 percent was designed to not stifle investment.

“We wanted to start with a reasonable and small percentage because we don’t want to discourage investment in the state of Washington,” Christophersen said. “If the fee was too large it might be a barrier to what they want to invest. You’re going to get into some pretty large numbers [of out-of-state investment] so 1 percent might generate some large revenue.”

Kristine Reeves, a Democrat representative in the legislature, said in an e-mailed press release from WACA that she supports WACA's proposal.

“I am looking forward to working with my colleagues to create a new statewide loan fund to increase access to capital and more opportunity for women and minority license-holders in the cannabis industry," Reeves said in the statement.

Christophersen said WACA is also advocating for the state to loosen criminal background requirements for ownership of pot businesses—requirements that are seen as another bar to minorities owning businesses.

WACA’s proposal comes as the LCB announces its own attempts to boost minority ownership in the industry. Last month, LCB executive director Rick Garza told the AP that the agency is exploring issuing currently unused retail licenses to people who come from disadvantaged groups and offering a new grant program to those same business owners.

Retail licenses in Washington are highly coveted because of the way our market is structured—there are more than 1,000 businesses licensed to create pot products but only about 400 licensed stores. This constricted retail market makes every license worth a lot of money. The LCB said they currently have 11 inactive retail licenses they could give to members of disadvantaged groups, and Garza said they are open to possibly issuing even more.

Garza said the agency also wants to create a new fund that would provide grants to minorities who own pot businesses to help them comply with the state’s onerous regulations. Running a pot business requires an incredible amount of jumping through hoops, from where exactly your cameras are faced to how you report where each plant is tagged or product is scanned. This fund would help small, minority-owned businesses comply with those laws.

“We believe our fund will raise quite a bit more revenue but then… at the same time they would probably be eligible for grants for technical assistance, so we think these can work hand in hand,” Christophersen said.