Matt Damon and Ben Affleck Are No Angels

Can you imagine these two...with halos? Legendary
Welcome to Unstreamable, a weekly column that recommends films you can't find on major streaming services. This week: Dogma, All That Jazz, The Curse of Kazuo Umezu, Mermaid Forest, and Fatal Exposure. Find our other recommendations here.
***
DOGMA
USA, 1999, 130 min, Dir. Kevin Smith 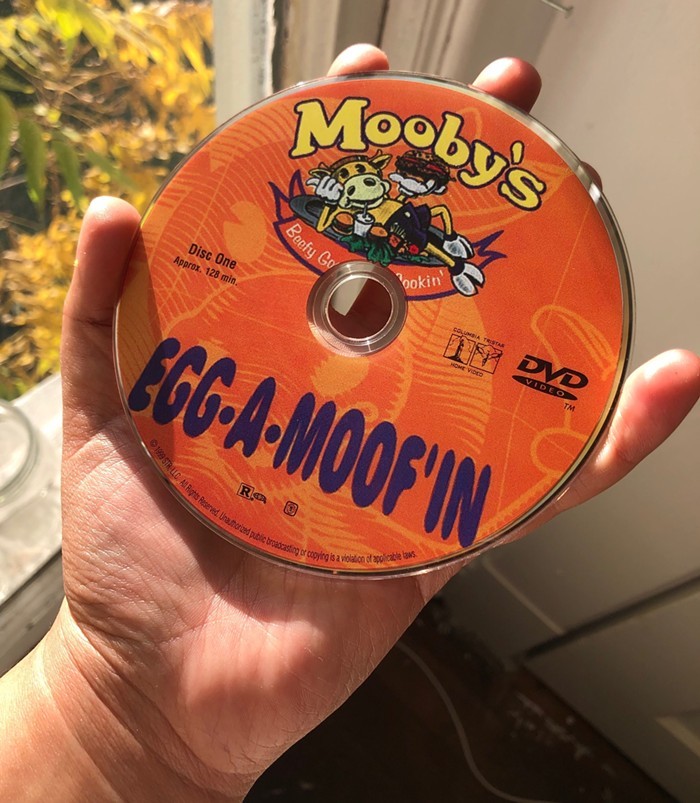 Mooby's is a fictional brand straight out of the mind of Kevin Smith. JK
For the record, Matt Damon and Ben Affleck are bad actors. I don't buy into the decades-long, Boston-tinged, Weinstein-backed con that's been sold to the American public convincing us otherwise.* They bring their mediocrity to Kevin Smith's Dogma where the two play fallen angels who are looking to exploit a loophole in order to get back into heaven and—in the process—destroy all of everything that ever was. It's up to an abortion clinic worker Bethany (Linda Fiorentino) and her gang of divine allies (including the prophets Jay and Silent Bob) to stop them.

Perhaps the most interesting part of Dogma is why it isn't currently available to stream. After religious groups like the Catholic League protested the film's release, the Weinsteins bought the film from Disney and released it theatrically through Lionsgate. Sony picked up the home release. Digital didn't exist back when Smith originally shot the film, so a digital release wasn't part of the deal. The Weinsteins could license the film again for streaming purposes since the film is technically still in their possession, but in light of the sexual assault allegations made against Harvey Weinstein and the forthcoming trial, it seems like Dogma may not see Netflix for a long, long time. JASMYNE KEIMIG

*Fine, I'll admit that Damon is pretty good in the Ocean and Bourne trilogies.

Available for rental on DVD at the Seattle Public Library and Scarecrow Video. I bought the special edition DVD because it was on sale, so it's also available in my living room!
***
ALL THAT JAZZ
USA, 1979, 123 min, Dir. Bob Fosse 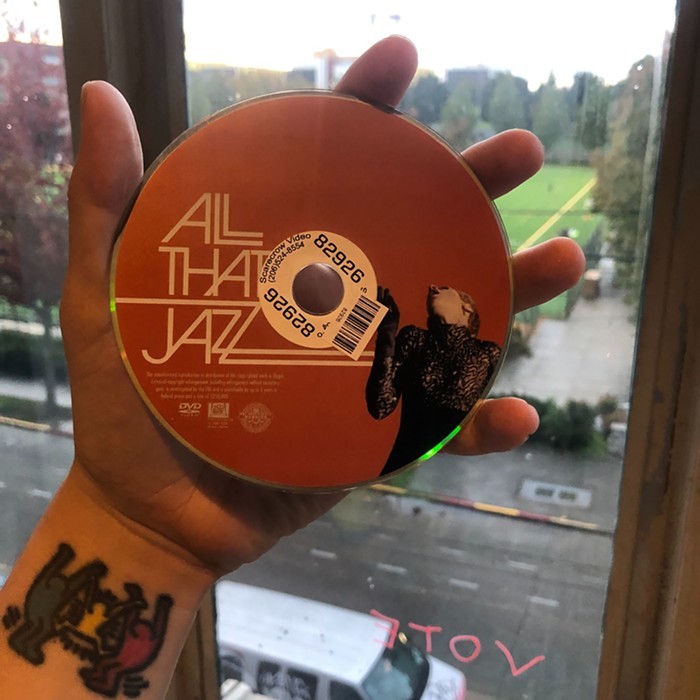 Jazz hands! CB
I took a lot of dance classes in high school, and Bob Fosse’s choreography left the biggest impression on me (besides dance belts; those belts have a bone to pick with testicles). Fosse’s gender-neutral choreography was revelatory. Men and women dancing the same way? Strange and soothing. But Fosse’s commitment to fucking up gender stereotypes in dance never extended to his personal life. He was a misogynist, an obvious fact in this year’s Emmy-winning limited series, Fosse/Verdon, on F/X, and also in All That Jazz, an autobiographical unstreamable film directed and choreographed by Fosse about Fosse.

The film follows a Fosse-type character, Joe Gideon (Roy Scheider), as he struggles to balance the demands of his ego, work, lust, family—in that order. Joe sexually harasses women throughout the film, cheats on partners, never apologizes. Female dancers are all in service of Fosse. It doesn’t pass the Bechdel Test. Still, the film was wildly successful. It won the Palme d'Or at the 1980 Cannes Film Festival. It made over three times its budget at the box office. The film's closing number, "Bye Bye Love," is a masterpiece of musical theater. So what do we do with great works made by bad dudes? CHASE BURNS 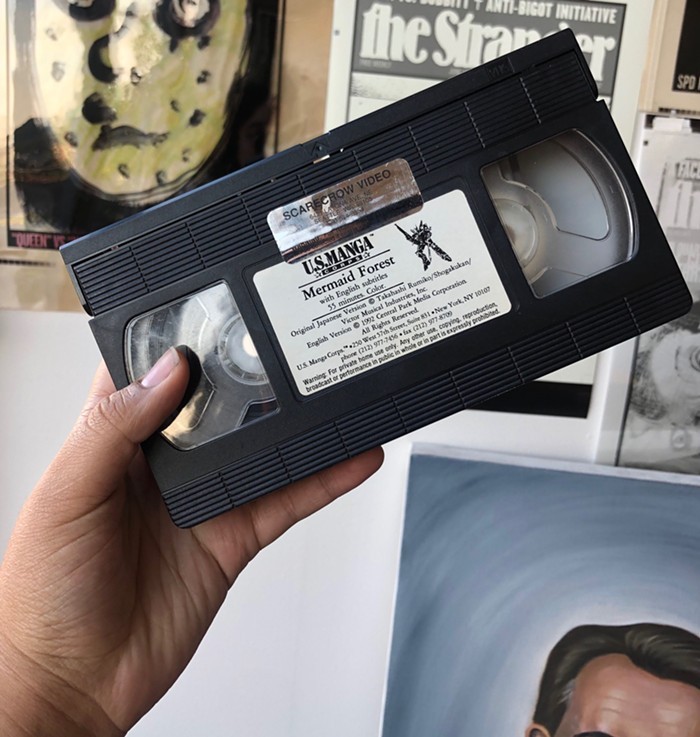 Lots of mermaid blood in this one. JK
Anime and horror collide! The Beacon is doing a double bill of two creepy OVAs (original video animation), The Curse of Kazuo Umezu and Mermaid Forest, on Sunday, Oct. 20, as part of their ongoing Anime Sunrise series. Inspired by the works of horror mangaka Kazuo Umezu and Rumiko Takahashi, these unstreamable vintage tapes are tough, if not impossible, to find. Scarecrow has Mermaid Forest, although it's rental by approval-only and requires a security deposit.

A rare tape doesn’t equal a good tape (trash can be rare), but Mermaid Forest is dark, puzzling, weird—and fueled by mermaid blood. Hot, scaly, mermaid blood! It includes scenes of slaughtered merfolk, a doctor who cuts off people’s hands, twinks cursed with immortality, a demon dog who kills anyone who crosses his murderous master... Excellent Halloween fodder. I doubt you'll be able to see either of these in a theater again. CHASE BURNS

Available for rental on VHS at Scarecrow Video and screening at the Beacon soon.
***
FATAL EXPOSURE
USA, 1989, 83 min, Dir. Peter B. Good 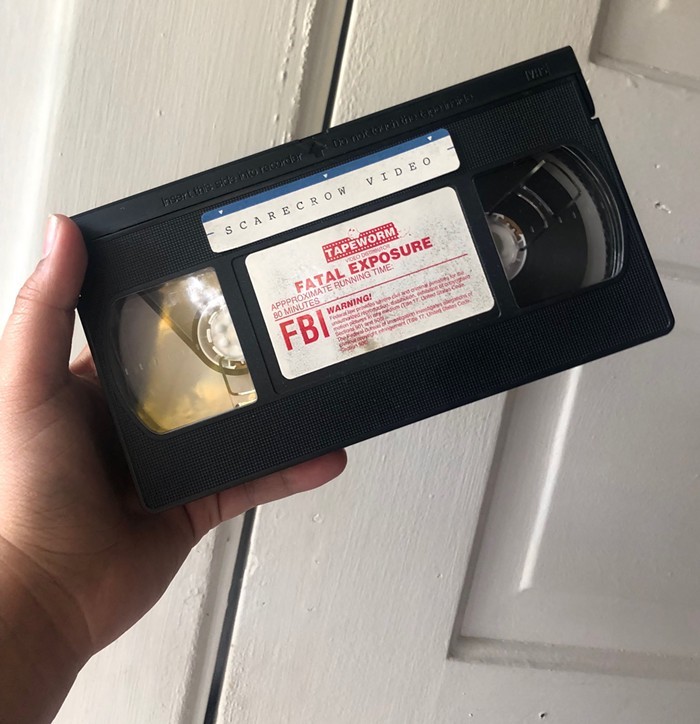 This is my first VHS I've watched in this series! Applaud me, please. JK
Fatal Exposure imagines the great-grandson of Jack the Ripper (also named Jack) as a handsome, wealthy, American serial killer who loves photographing his female victims as he murders him. He drinks the blood from his victims in order to stay sexually potent so that he can impregnate the right woman with his murderous seed. Wooo boy. He finally meets his match in a girl with absolutely no danger-radar named Erica, who unwittingly helps him lure women into his house. But Jack—in his drive to murder, fuck his girlfriend (awkwardly), and procreate—starts making mistakes that could expose him.

Available for rental on VHS at Scarecrow Video and screening at the Grand Illusion soon.