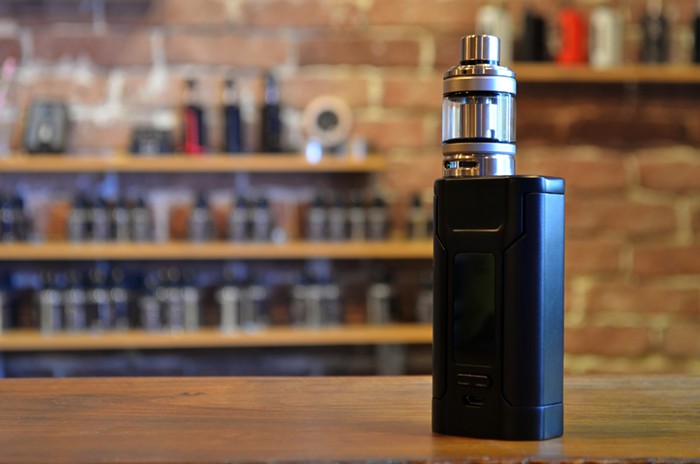 In October, Gov. Jay Inslee issued an executive order banning flavored vape products. Nijat Nasibli/Getty Images
This week the CDC released a new report on the rash of vaping-related illnesses that have sent parents, politicians, public health officials, and the vape community into a panic. The experts found that of the 1,888 vape illnesses reported in 49 states—including 34 deaths—only 11 percent vaped nicotine exclusively. The rest vaped THC products, most commonly vapes procured on the black market. But for the sellers of nicotine vapes, this report comes a little too late: the bans have already started.

Along with several other cities and states, earlier this month, in response to the illnesses, Gov. Jay Inslee issued an executive order banning flavored vape products in Washington state. And this is killing Zach McLain's business.

"Business has dropped dramatically since the flavor ban," said McLain, the owner of Future Vapor in Seattle. "Like a 75 to 80 percent drop. Flavors really matter to a lot of people."

This includes him. McLain was a pack a day smoker for 25 years, starting at the age of 13. "My friends all smoked, so I started smoking too," he told me. After trying, and failing, to quit smoking a dozen times, he'd resigned himself to smoking until it killed him. And then, eight years ago, he got his first vape kit.

"That was it," he says. "I never looked back." Vaping, he says, fulfilled both the hand-to-mouth habit and the social aspect of smoking, which isn't the case with other smoking cessation products like gum or the patch.

Like all smoking cessation devices, vapes are far from 100 percent effective, but for many people, they do work. According to a study published in the New England Journal of Medicine, vapers had an 18 percent success rate of quitting smoking, which was nearly double that of people who used other nicotine replacement products like patches or gum. Another recent study, this one in the journal Nicotine & Tobacco Research, polled 8,200 smokers, and they also found that vapers were the population most likely to successfully quit. The effect size wasn't huge, but it was significant: 11 percent of vapers were able to quit versus 6 percent of non-vapers.

"That's why I opened this store," McLain said. "I never thought I was going to be a retail guy but this product saved my life and I wanted to bring it to other people."

The evidence of his success is obvious in his shop, a comfortable storefront in Capitol Hill that smells vaguely of vapor. One wall displays dozens of hand-written testimonials from his customers. "It helped me kick tobacco after 20 years of trying!!," one reads. Others say, "For my boyfriend," "For my niece and nephew," "For my son."

The flavor ban was issued in response to vape illnesses, but the impetus for the ban was just as much about youth vaping, which has been on the rise for several years and is concerning for obvious reasons: Nicotine is addictive, and while teen smoking rates have been dropping for decades, all of a sudden kids are getting hooked on nicotine again.

The flavor ban was meant to address that trend as much as it was about vape illnesses, and it's based on the idea that kids are more likely to be attracted to flavors. But adults like flavors too—70 percent of adult vapers use flavored products—and one effect of the ban is that adults who use vaping to stay off cigarettes are no longer able to get the products they want. This, ironically, has the effect of sending people away from reputable businesses like McLain's and directly to black-market products.

Susan Collins, the co-director of the Harm Reduction Research & Treatment Center at the University of Washington School of Medicine, wrote about this problem recently in the Seattle Times. "As a scientist, clinician and parent, my instinct and duty are to protect the public, especially children, from harm. But outright bans could worsen our current crisis and have unintended negative consequences for adults and children alike..." she wrote. "Bans on vaping and related products will almost certainly drive people who vape to use lower-quality, illicitly produced products — or to resume smoking. These are the most dangerous and deadly possible outcomes for the general public, including our children."

Another irony of the flavor ban is that the one flavor that isn't banned is tobacco—the very product that many vapers are trying to get off in the first place.

"It's so backward," McLain says. "They are actually pushing people who've severed their relationship with tobacco right back to it."

To McLain, the repercussions of the ban are obvious: People are going to go back to smoking, something that he says he's already seeing. "The same places I used to see people vaping, now I see them smoking," he says. This is anecdotal, and it's too soon to know if vape bans will drive large numbers of people back to cigarettes, but, according to a recent report from Nielsen, e-cigarette sales are dropping, while, at the same time, the decline in cigarettes sales has slightly slowed.

The state Board of Health will reconsider the ban in February. They may, at that time, make it permanent. Before that happens, McLain hopes that government leaders like Jay Inslee and others working in public health will start to engage people like him and others in the industry.

"Kids are not a part of our business model," he says. "It's always been about introducing this product to smokers as an alternative to combustion. We don't want to bring more people to nicotine. That's never been a part of the business model and it's not what we do, but these people in the government just do not listen to us."