The Film and Music Industries in Seattle Are Losing 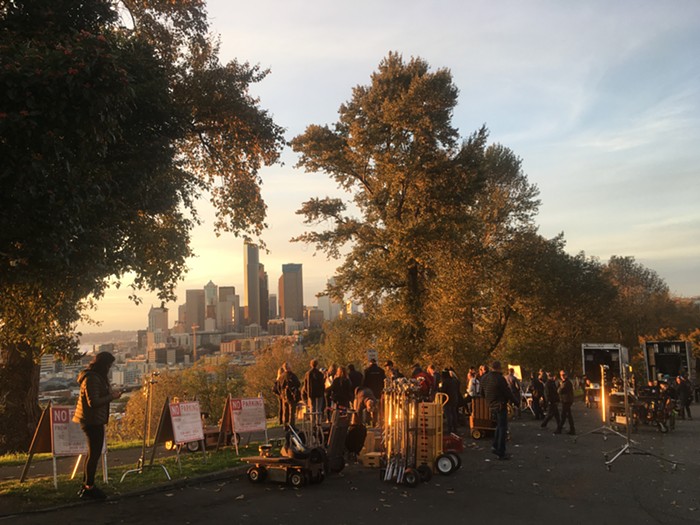 A Seattle film crew on a recent shoot in the city. Courtesy of the Film and Music Coalition
While Seattle has never offered the same film and music industry benefits as cities like Los Angeles and New York, until recently, it did have enough opportunities to allow for a reasonable living in a city that was more affordable and livable. Which made it worth the extra fight that had to be made to carve out a living here as freelance film technicians, club musicians, or any number of jobs and businesses that are the infrastructure and backbone of these industries.

Unfortunately, this is no longer true. The incredible economic tech bubble Seattle is experiencing is pushing out film and music jobs and companies. As people have had to make the hard choice to leave town to pursue their careers, Seattle is also losing that sense of a creative community that once made it worth all the other struggles.

In 2011, Seattle began losing film crew to the city of Portland, where episodic TV shows provided consistent union wage work with benefits. Some retained homes in Seattle and traveled back and forth, while others moved outright and bought homes in Portland. With technology changes, advertising budgets changed. In Seattle, where commercials and web content make up the bulk of the film work, the working relationship between ad agencies, production companies, and post-production companies continues to change and be challenged, often resulting in less work for fewer people.

As local media outlets like The Stranger, KEXP, and the Seattle Times have noted, the music industry has also suffered. Six music venues have either closed down or been scheduled for redevelopment, and countless full-time musicians have packed up-and-out. This is just a fast and simple illustration of a larger trend that has been going on in Seattle in recent years.

The Seattle Office of Film and Music (OFM) is a municipal office charged with permitting and regulatory work, as well as the advancement and promotion of the film and music industries.

After Kate Becker left as director of the OFM in March, our industries were anxious to hear how Mayor Jenny Durkan would use this change of leadership opportunity to empower the OFM to address the decline in film and music business activity.

But rather than hiring a new director, Durkan challenged her Offices of Economic Development (OED) and Arts and Culture (ARTS) to undertake a planning process that would “define a Creative Economy strategy that leverages existing resources to best meet the needs of the film, music, events, and arts communities and industries.” She said this study would be in the interest of developing “a community-centered, comprehensive approach to support and grow our creative industries, so Seattle can continue to be the city that invents the future.”

Since that time, the OED and ARTS have jointly published 11 recent studies
the city has commissioned over the last seven months to better understand the needs of the industries. With those studies in hand, the mayor, ARTS, and OED then came to the perplexing conclusion that the answer was to restructure the Office of Film and Music into the “Inclusive Creative Industry Program.”

“Our creative industries are not just good for our economy—they make our city better, and the vibrant, and soulful city that we want to be. With that goal, we’ll also invest in work to build Seattle’s creative industries and make it an economic priority,” Durkan said in her 2020 Proposed Budget speech on Sept. 23. “Our Office of Film + Music will work in partnership with our great entertainment community.”

That was the BIG idea. In more concrete terms, the mayor’s budget proposal “repurposes” the OFM with a new “Creative Industry Cluster” program that does not include any of the promised definition, goals, or growth strategies she asked for in March. She did not announce a single concrete plan of action to stop losing businesses and jobs in this area. She didn’t put forward any new policy that distills all the studies and conversations into steps that would reverse a bad economic trend.

There were no partnerships recommended with private sector partners and no new financial investments into the community. Nothing! It felt like OED and ARTS gave the mayor a plan that came from a predetermined agenda that they are presuming will be effective because they say it will be. That’s it! Instead of taking the time to complete the work of disseminating the surveys and circling back to those working in the industries to help best determine next steps, we got promises and undefined policy.

In response to the mayor’s proposal, a Film and Music Coalition (FMC) has been formed that is made up of seven film and music labor unions representing almost 3,000 professionals working in these industries.

This group was created to tell City Hall that their proposed budget comes up short for those it will affect. The city is placing a big bet on a risky strategy, which is to throw away the Office of Film and Music—an international model for policy-making and advocacy that has previously worked for Seattle—for a “Cluster Strategy” that the city can’t even describe, let alone show economic growth for.

Seattle deserves more than this. Our film and music industries deserve the respect and the support we’ve been asking for and we think it’s better to hold City Hall accountable to action before they make the kind of proposed sweeping changes that are currently on the table now.

If you want Seattle to be a creative capital and the kind of city where lots of people can make a living in film and music careers, then tell the city council to put a hold on Mayor Durkans’s vague Creative Cluster proposal until a plan is put forward that demonstrates how the mayor will actually grow jobs, wages, business, revenue, and equity in Seattle’s creative economy.