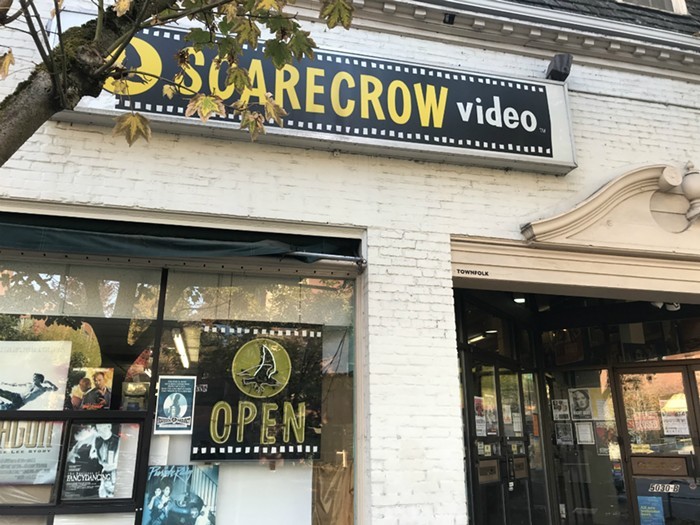 In case you missed it: one of the world's largest media libraries is in Seattle. Nathalie Graham
"We’re on the precipice of the 'streaming apocalypse.'"

"This may be TV’s biggest fall ever. It could also be its last."

“This market is going to have to shake out—it doesn’t feel like all these players can continue to play this game forever."

If you've been lucky enough to avoid this discussion, let me pop your bubble by telling you that the streaming wars have officially arrived. Apple+ launched on November 1 and Disney+ launches tomorrow. NBC's new streaming platform, Peacock, will be here in April. HBO Max, a confusing streaming service that will pair HBO's content with the exclusive streaming rights to popular offerings like Friends (and all of Studio Ghibli!!), will launch in May. There are more services, but it's dull to keep track of everything.

Even for fans, streaming TV has started to feel like work. How do you keep up with The Great British Bake-off and Watchmen and Schitt's Creek and still manage to work a job and buy groceries and pay attention to your boyfriend? Being a star student of TV now requires monastic devotion. Netflix, in a startling move, just tested out a feature that lets viewers watch shows at 1.5x speed. Bleak.

The great fraud of the streaming age is that while streaming services sell us the illusion of infinite content, our viewing choices have become more regulated. Scarecrow Video's Executive Director Kate Barr said it well in an interview last year with the Black List Blog:

What made videos and home viewing such a revolution is all of a sudden that decision about what a person could watch shifted from being in the hands of a corporation to being in the hands of an individual. I could walk into a video store where there were hundreds or even thousands of titles for me to choose from, and I got to make the decision about what I wanted to see. What’s kind of interesting about thinking of it as a revolution and as a way of empowering the individual to make viewing choices, is that we really come full-circle — what’s happening now with streaming is that the decision-making process is once again in the hands of corporations.

Let's say, hypothetically, you wanted to watch Alanis Morissette play God in Dogma. Or Cher play a "butch" lesbian in Silkwood. Or John Leguizamo play Luigi in Super Mario Bros. Or Whoopi Goldberg make fun of the Knicks in Eddie. You're shit out of luck unless you have access to those titles on physical media. They are all unstreamable on major streaming services. So are countless other films. "We were looking at some of the lists like the AFI Top 100 American Movies and I think Netflix had eight of them," said Scarecrow's John O’Connor in that same Black List Blog interview.

Over the summer, I began taking weekly walks from my place in Capitol Hill to Scarecrow in the University District. I did it because my only form of exercise is getting stoned and taking long walks, and also because I was experiencing streaming fatigue. Slogging through Netflix's catalog was beginning to feel like shopping for something personalized at IKEA.

It's miraculous that Scarecrow, after 30 years, is still in the ring. It's one of only two video stores in Seattle (the other is Reckless Video in Maple Leaf), but unlike anything else. The video emporium, created by Rebecca and George Latsios in the late '80s, successfully became a nonprofit in 2014 and currently has over 132,000 titles. Scarecrow estimates that to substitute its offerings with streaming services you'd need 10 different services, it would cost $100 per month, and you'd still only get one-third of their whole catalog. Their rental prices are also competitive—for most films, you can drop $4.50 and get the title for seven days. (And on Wednesdays, you can rent two films for the price of one!)

Stranger staff writer Jasmyne Keimig started joining me on these weekly trips, and as an experiment, we decided to only rent films that weren't available via streaming—unstreamable films—and document them in a weekly column called Unstreamable. While we knew there was a limitless amount of titles unavailable on streaming, we thought we might run out of good content pretty quickly. Streaming companies, we assumed, were picking the best. That was a dumb assumption.

Some unstreamable discoveries: Few things are hotter than Denzel Washington in Mississippi Masala. David Bowie's The Linguini Incident is a weird, sweet, forgotten gem. Why is there no digital love for the '90s bisexual treasure The Doom Generation? It's a tragedy that the Oscar-nominated, Diahann Carroll-starring Claudine is so hard to find. Meanwhile, RuPaul's Starrbooty is a new low in cinema and perfectly content as entertainment contraband.

After nearly four months and over 60 titles, we've found that each time we rent a title we stumble down a new wormhole. Streaming services tend to recommend titles based on what other people are watching, but choosing from a physical media library means picking titles based on what you're watching. Browsing a library by hand will always be a better teacher than an algorithm.

Streaming services are only going to get more expensive and their catalogs have been dwindling for years. Our choices will be even more forced by the hands of CEOs like Bob Iger and John Stankey during this new decade of streaming. In Seattle, our rare video stores (and impressive library system!) offer alternatives. We'd be fools not to use them.