Sir, this is an Arby's. China Photos / Stringer
Besides THE SNOW, today's biggest story is obviously THE DEMOCRATIC DEBATE. It happens tonight from 6 p.m. to the end of time, or around 8 p.m. Tonight we'll see Biden, Sanders, Buttigieg, Warren, Klobuchar, and that rich guy who isn't Bloomberg face off. Yang didn't make it. Marianne Williamson packed up her crystals long ago. Here are a few places you can watch the debate in Seattle. Also of note: the House Democrats released new impeachment evidence today, hours before tonight's debate. It shows Giuliani asking for a meeting with Zelensky and saying he was acting with Trump's “knowledge and consent":

The House Intelligence, Oversight and Foreign Affairs Committees just transmitted additional evidence to be used as part of a Senate impeachment trial.

These documents demonstrate that there is more evidence relevant to the President’s scheme:https://t.co/5uqZr3Kl5l pic.twitter.com/zWIcZRVv63
— House Intelligence Committee (@HouseIntel) January 14, 2020

This letter from Giuliani, just released,looks hugely significant. It says Ukraine was done for the President in his personal capacity and w Trump’s knowledge,not, as Trump has claimed,for the American people. Trump is going to have to claim Giuliani lying https://t.co/p2AS6pggAa
— Neal Katyal (@neal_katyal) January 14, 2020

Wait, is Bloomberg really only one point behind Buttigieg in the averaged polls? You people want BLOOMBERG? These polls will give me a heart attack.

There was also a new Iowa poll released this week: I can't look... I shouldn't look... Fine, let's look:

Andrew Yang won't make it onto the debate stage tonight but the #YangGang got a notable new member this evening.

Thank you @DaveChappelle and welcome to the #yanggang. You are the best. Let’s do this for our kids. 🙏👍 pic.twitter.com/HGznFG00kr
— Andrew Yang🧢 (@AndrewYang) January 14, 2020


Let's pivot away from the polls and head to China where Star Wars keeps bombing. "Movie after movie has flopped in the world’s second-largest market, where nostalgia for the series has no power over viewers," writes the New York Times. As someone who's never "got" Star Wars, I would agree that nostalgia is key to the franchise's success. Disney was apparently so thirsty for Chinese viewers that they lined up 500 Stormtroopers on the Great Wall of China before the release of The Force Awakens in 2015. Tacky.

Have you ever had an online date that went terribly wrong (or flopped even before it began)? TELL US YOUR STORY and we may give you COLD HARD CASH.

Liquid silicone isn't the only thing that can leave you with a "stony hard" testicle: A "worm infection" can do that, too.

What the fuck are Democrats doing in Olympia this year? Let us tell you!

Boeing had more cancellations than orders in 2019, reports Geekwire. "The net tally for the year, reported today, is -87 — which Boeing says is the first time in at least 20 years that the number has fallen below zero," writes Alan Boyle. Are we in for another Great Boeing Bust?

It goes further! Zahilay just issued a proclamation honoring Gossett for MLK month. So one of Zahilay's first actions as a councilmember is to issue a proclamation celebrating the person he just defeated. https://t.co/TRgPIzsFzt
— David Kroman (@KromanDavid) January 14, 2020


Okay, fine, I guess it's time to talk about the only thing anyone wants to talk about today: Snow. We're under a winter storm warning until roughly tomorrow morning. The Seattle Times has at least four staffers on snow watch. Things I've learned from them: The snow might hit Seattle around 8 p.m., right when the Democratic debate climaxes. Refreezing will probably happen, which is bad. I don't recommend riding your solowheel tonight, baby.

Some helpful advice: Be a penguin.

Tips on how to walk on ice: Be a penguin from r/Seattle

Emergency shelters have been expanded in Seattle due to the falling temperatures. "Seattle is vowing no one in need will be turned away, as the city said it has capacity to serve about 600 people through different locations across Seattle," writes the Seattle PI. The mayor has proclaimed that "we have proactive enough outreach that we really are trying to get people safe and warm."

What's the white stuff falling from the sky? If you're in LA, it might have been this:

What the fuck is up with Boeing: A Delta plane (a Boeing 777-200) dumped jet fuel over Los Angeles public schools today. The plane had good justification (an emergency landing), but still—icky. 60 people had to be treated for minor injuries. I'd be fine with never getting on a plane ever again, but I have aerophobia so don't listen to me.

The scene of Park Ave Elementary School in #Cudahy where children were exposed to fuel being dumped by plane. @latrafficgal @NBCLA pic.twitter.com/t6uZE71TNT
— Katherine Picazo (@KatNBCLA) January 14, 2020 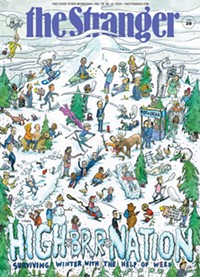