The Reverend Dr. Riz Rollins Grooved from the Mountaintop to Kick Off MLK Day 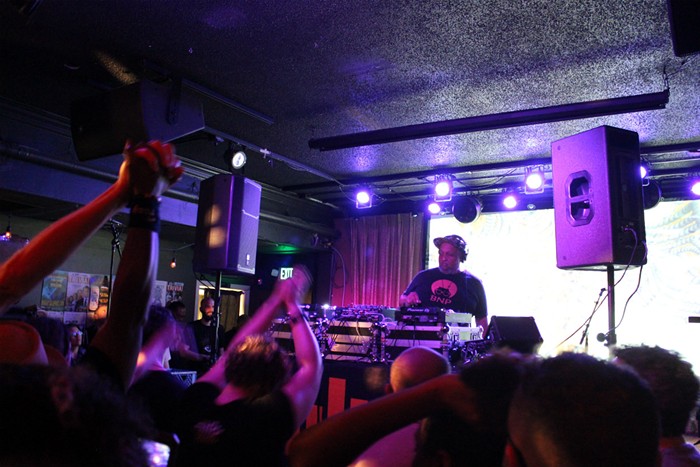 A momentary pause during “I’ve Been to the Mountaintop.” Yiting Lim
The Reverend Dr. Martin Luther King, Jr. did not live long enough to see the birth of house music and DJ culture sweep through many of the communities he championed. I am not presumptuous enough to speculate on what he would have made of electronic dance music, but damn if the rainbow of ages, genders, races, sexualities, and abilities getting down at the 19th annual Expansions MLK Unity Party on Sunday night at the Clock-Out Lounge didn’t feel like the 20/20 vision (to borrow the theme of Monday’s MLK Day Parade) we should all hope to live in.

Expansions, KEXP’s Sunday night electronic music program, has long been my weekly ritual to wind down the weekend. The opportunity to transmute that tradition from my living room to the club is a once-a-year treat not to be missed. Every one of Expansions’ rotating hosts—Sharlese, Alex Ruder, and Kid Hops, as well as some pinch hitting from veteran local DJ and Expansions host Brit Hansen—kept the vibe right amidst a sea of breakbeats, hoover synths, drum machines, squelchy bass lines, piano riffs, and all the other delicious ingredients in the stew of ’80s and ’90s vintage electronic music.

But the crowd’s deepest reserves of applause and admiration came for Expansions’ elder statesman of groove, the inimitable Riz Rollins. Eschewing the deep cuts, Riz preached the hits for this Sunday night mass from the DJ-booth-as-pulpit. Aretha Franklin’s “A Deeper Love [A Deeper Mix],” Crystal Waters’ “Gypsy Woman (La Da Dee La Da Da),” and Marshall Jefferson’s “Move Your Body” are all instantly recognizable anthems that set the multigenerational dancefloor ablaze. (So multigenerational that Riz’s mom showed up stage right at midnight to deliver food to fuel the DJ booth inspiration.) While I cherish the Clock-Out Lounge for bucking the trend and opening a new nightlife venue in an ever-changing Seattle, the capacity crowd does suggest that Expansions should go bigger in 2020, like a return to one of its previous larger venues, say Neumos or Columbia City Theater.

Around midnight, as the clock ticked over to MLK Day proper, Riz spliced in the civil rights leader’s last speech, “I’ve Been to the Mountaintop.” The ravers paused, hands in the air, to absorb the wisdom of a slain hero, sounding all the more poignant as we dive headlong into a bruising election year where the fate of the republic seems to feel at stake. Then the beat dropped, and we went back to dancing our 20/20 vision into reality.