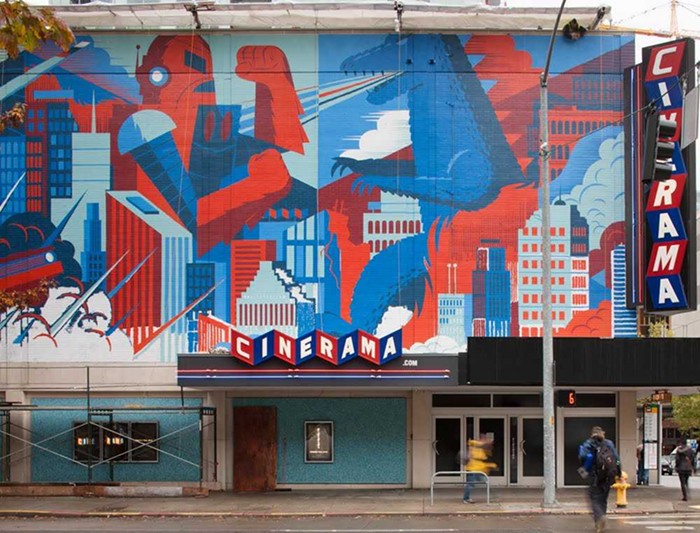 Full disclosure, I worked at the Cinerama in college. As a Cinerama popcorn expert, I recommend getting 75% regular popcorn and 25% chocolate... assuming they still have popcorn post-renovation. Charles Mudede
Cinerama, the Vulcan-owned movie theater in Belltown known for its chocolate popcorn, announced today that it will close its doors for renovations for an indeterminate amount of time.

In the announcement, the theater stated it will reopen "later this year."


Cinerama employees told The Stranger that a majority of them were laid off Tuesday without notice. Nearly 30 employees were gathered for a 10 a.m. meeting at the theater and were told to pack their things, grab their exit paperwork, and leave the building, according to employees.

Anna Imperati, a Vulcan spokesperson, confirmed that the entire concession staff was laid off, but said that Vulcan "retained the necessary staff" to get through the renovations. It's unclear how many staff members were retained, as Imperati said she cannot discuss employment terms publicly.

Imperati said the renovations will include an overhaul to the kitchen, replacing the carpet, and addressing normal wear and tear throughout the building. Cinerama's last major renovation was in 2014.

In a document entitled "Separation from Vulcan Cinema Group" provided to employees and sent to The Stranger, Vulcan informed its employees that it had "made the decision to end your employment effective February 4, 2020."

Seasonal employees—staff members who were hired during popular movie-going periods like summer—were let go quietly about a week ago, according to a seasonal employee hired over the holidays who requested anonymity. He said they were told not to come in for their scheduled shifts.

"When I got fired," the employee told The Stranger, "Vulcan called me over the phone to tell me that my contract wasn't being picked back up." He said he was told he shouldn't show up for his remaining scheduled shifts, but would still get paid for those hours.

In the document given to employees, Vulcan provided an FAQ with sample questions like, "Why did we not get advanced notice?" In that question's answer, the FAQ responded: "We have known we needed to renovate for some time and have been waiting for the right time. The break in programming presented the right opportunity to do the renovation now so we can reopen ahead of the year's biggest films." The FAQ also stated that employees will be able to re-apply when the Cinerama reopens.

The theater just finished its showcase of Oscar-nominated films this past weekend. However, it was slated to show the Margot Robbie-led film Birds of Prey starting this week.

"When I caught a movie there last week the word was that Birds of Prey was canceled but no one was told why," the employee told The Stranger.

Seattle's film community was quick to criticize the decision from Cinerama to lay off its employees. Ark Lodge, an independent theater in Columbia City, derided the move in a tweet:

We also would’ve respected our employees and found employment for them or at least find a way to pay them while we were closed and we’re not rich. We hope that the owners of Cinerama are doing this very least thing for their dedicated employees. https://t.co/htgKHcT7xS
— Ark Lodge Cinemas (@ArkLodgeCinemas) February 4, 2020