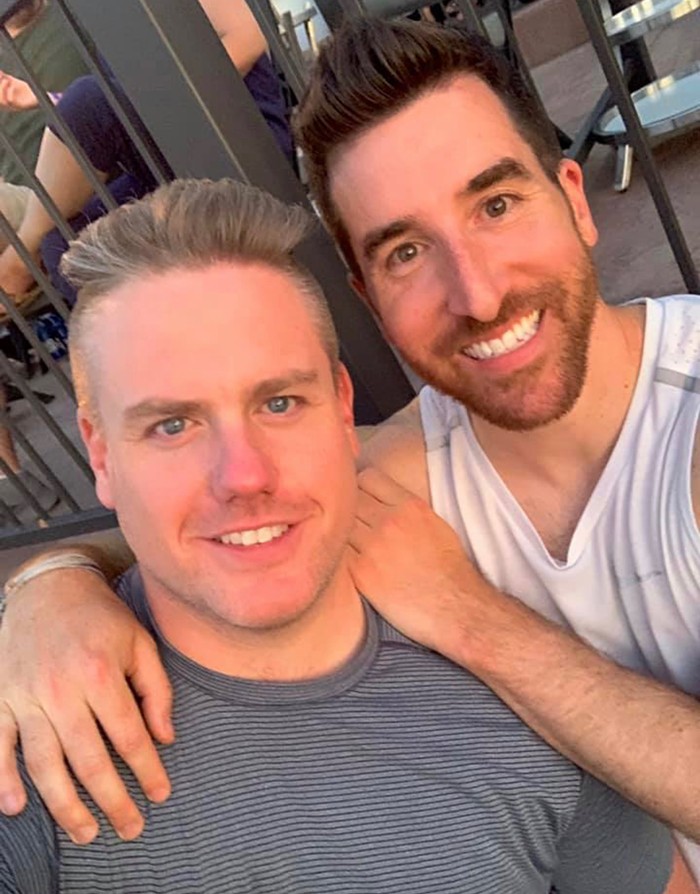 Paul Danforth, right, with his fiancé Sean Nyberg. Sean Nyberg
Students are planning a protest at Kennedy Catholic High School in Burien on Tuesday in response to the forced resignation of two gay teachers.

The teachers, Paul Danforth and Michelle Beattie, had both been employed by the school for six years. Both became engaged to their partners last year, and according to a source familiar with the matter, when they informed school leadership, they were told they could continue their employment at the school if they agreed to keep their engagements private or they could resign and be bought out of their contracts. The teachers reportedly chose the latter option and were officially dismissed from their positions last week, after several months of turmoil.

Danforth, who taught English, is a graduate of KCHS as well as the son of a former faculty member. Beattie taught health and fitness and coached soccer. Both teachers, according to sources, were well-liked by both students and parents, and some alumni have joined the chorus protesting their resignations.

"I went to Kennedy with Paul Danforth," says Washington State Senator Joe Nguyen, a Kennedy graduate. "He wanted to go back and teach there because his father taught there. There is nobody that embodies the values of that school more than Paul and his family, and it's like, they fucking shun him because he happens to have a different sexual orientation? No. If you look at the stuff we are doing locally, nationally, and in the state to make sure we have equity for the LGBTQ community, and then you see shit like this happen, it's pretty frustrating. We all understand how important it is for these voices to be uplifted. This is a huge step back."

When asked if he has any sympathy for the school's religious freedom, Sen. Nguyen said, "No, I don't." Legally, however, the school is likely within their rights if Danforth and Beattie's engagements violated their employment contracts—which, in religious organizations, often include some sort of morality clause that requires the signer to abide by the official teachings of the church. While Washington state has some of the most robust protections for LGBTQ people in the U.S., laws prohibiting employment discrimination based on sexual orientation don't necessarily apply in this case. Private schools, according to some legal scholars, can do what they want, unlike schools and other institutions that receive public funding.

But even if the teachers' forced resignations didn't violate the law, the school has certainly created a massive PR headache for itself. This story has now become national news. As of Monday morning, a Facebook group set up to support the teachers had over 4,000 members; a fundraiser for them had raised nearly $30,000; a Change.org petition has more than 10,000 signatures; and over the weekend, supporters of the teachers raised a rainbow flag on the school's flag pole. The Tuesday morning protest is likely to see hundreds, if not thousands, of attendees, and the students have planned a walk-out later that afternoon.

This is not the first time an area Catholic school has found itself in hot water over forcing out gay employees: In 2013, Mark Zmuda, then a vice principal and swim coach at Eastside Catholic School in Sammamish, was forced to resign after the school discovered that he'd legally wed his male partner. This resulted in walk-outs, student protests, and was covered from The New York Times to The Guardian. Zmuda later sued the school (the suit was settled out of court) and several of those who called for his dismissal ended up resigning themselves.

The support for both Zmuda back then and Danforth and Beattie now demonstrate an increasing divide between the views of the Catholic Church and its parishioners. A 2018 poll by the Public Religion Research Institute found that about 65 percent of U.S. Catholics support same-sex marriage. While Pope Francis has, according to the Human Rights Campaign, adopted a more conciliatory tone towards gay people, the Church continues to officially prohibit same-sex relationships, including marriage.

Kennedy Catholic School did not respond to a request for comment, but on Friday, school officials released a statement. "Two teachers, Paul Danforth and Michelle Beattie, have voluntarily resigned their positions at Kennedy Catholic High School," it read. "They are highly capable, gifted, and qualified teachers, who have served our community with dedication and humility. Their loss will be felt deeply by their students and the entire community. We are thankful to Paul and Michelle for their years of service."

The protest is planned for 9 a.m. Tuesday.