Yearning for Freedom! Blaxploitation Thursdays: The Spook Who Sat by the Door

For Black History Month I'm writing about a blaxploitation film every Thursday in February. Next up, The Spook Who Sat by the Door. 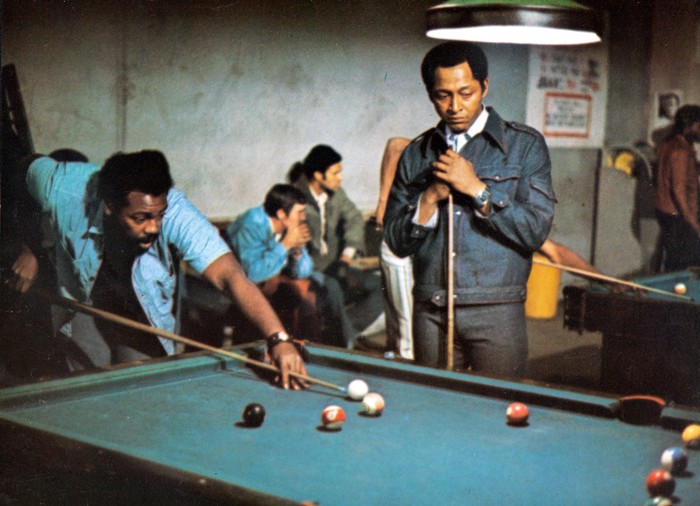 Dan Freeman (Lawrence Cook) playing pool and planning a takeover of white society. Courtesy of United Artists
"I can't figure you," says a member of a radical Black paramilitary group to Dan Freeman, the group's leader. "You want power or you want revenge, you know... what is it?" In his perfectly picked-out 'fro and denim suit, Freeman solemnly tells the young man, "It's simple Willy. I just want to be free."

Freedom—true liberation—is one of the central themes of Ivan Dixon's The Spook Who Sat by the Door, a clear-eyed and extremely political blaxploitation film that came out at the height of discussions around Black revolutionary power. It's kind of incredible that it got made. And if it were up to the Powers That Be, you would never have the chance to see it.

Based on Sam Greenlee's semi-autobiographical novel of the same name (who also co-wrote the screenplay), The Spook Who Sat by the Door revolves around Dan Freeman (Lawrence Cook), the C.I.A.'s first Black agent. He is smart and even-tempered; his old white bosses hate his intelligence and athleticism, only begrudgingly accepting him into their agency. They stick him in a windowless basement office for several years, trotting him out whenever they need to show their "progressiveness." He's a regular Uncle Tom. But the story turns once Freeman heads back to Chicago and immediately starts to organize Black people (read: men) in his neighborhood into a guerrilla group using his training from the C.I.A. He's going to overthrow whitey after all!

This was Dixon's second movie as a director after Trouble Man (which I wrote about in Unstreamable a couple of weeks ago). It was also his last. The film was independently produced and distributed by United Artists, but was quickly pulled from theaters, its prints destroyed, and negatives stored under another title. Greenlee even accused the F.B.I. of suppressing the film so that people wouldn't have a chance to see it. This suppression is a shame for many reasons, the least of which is that Cook gives an excellent performance as a level-headed revolutionary leader and could have absolutely become a star if given the opportunity.

With a quirky soundtrack by Herbie Hancock and cinematography by Michel Hugo (who also worked with Jacques Demy on Model Shop), there's a stylishness and clarity of vision to the movie that I find missing in other blaxploitation cuts. While it's uneven in parts (especially in its treatment of women), Spook clearly enunciates the problems facing Black people in America at the time, making it obvious to the viewer why organized revolt is more necessary than "Uncle Tom-ing" our way into power. Freedom is not given, but taken, after all.

The Spook Who Sat by the Door is available at Scarecrow Video.