Bernie Is Asked to Answer for His Bros 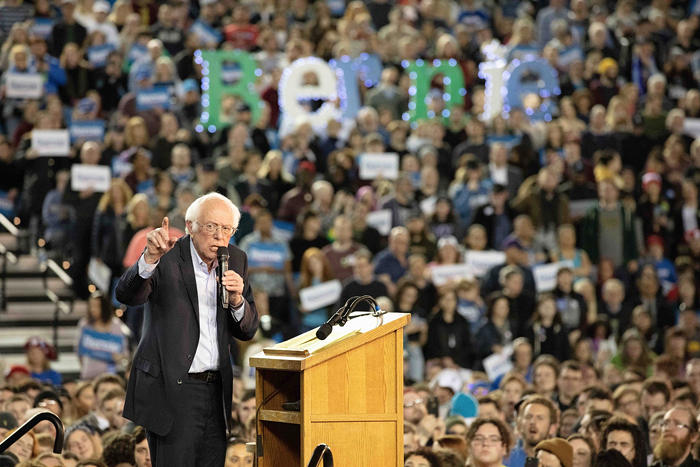 Bernie Sanders at a packed rally in Tacoma on Monday. Lester Black
Bernie Sanders's most ardent online fans have come back to haunt him.

At both a CNN Town Hall on Tuesday and on the debate stage in Nevada on Wednesday, Sanders was asked to answer for the behavior of "Bernie bros," an amorphous (and co-ed) population typified by being assholes online to everyone who does not support their candidate. The bros have been an issue since the 2016 race, and the rhetoric both from them and about them has only gotten worse.

Let's start Tuesday's CNN Town Hall. Sanders was asked by a supporter if he would disavow the Bernie bro's toxic behavior. He said yes, mentioned the abuse his own campaigners receive, and then insinuated that the cyberbullies may not be genuine Sanders supporters but people posing as Sanders supporters to hurt his campaign.

"We have an internet which is essentially the Wild West," Sanders said. "Somebody could say 'Hey, I'm Anderson Cooper,' and say some ugly thing and right now that cannot be stopped."

Sanders, to his credit, didn't suggest we should be cracking down on anonymous online accounts, but he also didn't provide any evidence to support his claims. While it's true that anyone can, in theory, go online and say he's Anderson Cooper, most major internet platforms make an effort to ban fakes, and it's unlikely a fraudulent Anderson Cooper account would last beyond a few tweets. In fact, I checked Twitter, and while there are a couple of accounts with Anderson Cooper in the user name, none of them make any attempt to actually pose as Cooper himself.

Besides, that's what verification is for. It's not hard to tell who is Anderson Cooper and who isn't. He's the one with the blue checkmark by his name. And as for non-Bernie bros posing as Bernie bros in order to make Bernie bros look like intractable pieces of shit, well, that definitely could be happening but Bernie didn't provide any evidence for it.

Maybe the Russians did it? Sanders has raised the question. “All of us remember 2016, and what we remember is efforts by Russians and others to interfere in our election and divide us up,” said Sanders at the debate on Wednesday. “I’m not saying that’s happening, but it would not shock me.”

Except there's no evidence of it. “There are not any Russian bots operating on here at the moment," disinformation researcher Josh Russell told The Daily Beast, referring to Twitter. "It's basically impossible at this point for them to operate on here. Twitter's site integrity team has made it real boring for me. I have checked and checked and checked hashtags related to the primaries, and it's just been really boring so far.”

Laura Rosenberger, director of the Alliance for Securing Democracy at The German Marshall Fund, weighed in:

We should stick to evidence when making claims about foreign interference - not engage in conspiracy theorizing. Bernie himself said “I’m not saying that’s happening, but it would not shock me.” This is deeply irresponsible. https://t.co/s08wNRpbqi
— Laura Rosenberger (@rosenbergerlm) February 20, 2020

Nevertheless, before his campaign rally in Tacoma on Monday, Sanders made similar claims to Q13's Brandi Kruse. "As you well know, the internet today is kind of the Wild West," he said, "and somebody can say something in your name which may not have anything to do with you."

(Luckily, there are fewer gun battles on the internet than there were in the Wild West, but we get the point.)

(1/2) Asked about criticism that his supporters are engaging it aggressive online attacks, @BernieSanders tells me he disavows such behavior, but "no campaign can control 2.5 million people." #Q13FOX pic.twitter.com/EvWY7dnRJE
— Brandi Kruse (@BrandiKruse) February 18, 2020

When the subject was broached again on Wednesday, it was by Sanders' rival Mayor Pete. “At a certain point, you’ve got to ask yourself, 'Why did this pattern arise?'" Buttiegeg said of Sanders's most hostile fans. "Why is it especially the case among your supporters?”

"We have over 10.6 million people on Twitter, and 99.9 percent of them are decent human beings, are working people, are people who believe in justice, compassion, and love," Sanders responded. "And if there are a few people who make ugly remarks, who attack trade union leaders, I disown those people. They are not part of our movement."

And then: "If you look at the Wild West of the internet, talk to some of the African American women on my campaign, talk to Sen. Nina Turner, talk to others and find the vicious, racist, sexist attacks that are coming their way, as well. So, I would hope that all of us understand that we should do everything we possibly can to end the viciousness and ugliness on the internet. Our campaign is about issues. It's about fighting for the working families and the middle class. It is not about vicious attacks of people."

I don't doubt this is true. Most Sanders supporters are not spending their time attacking people online. People have jobs to go to. And when these dumb internet fights do break out, it's certainly not just Sanders supporters engaged in them. His campaign spokesperson Briahna Gray, a former columnist for the Intercept, was getting attacked online for her support of Bernie Sanders long before she joined the campaign—although much of the sharpest criticism of Gray has come from prominent black thinkers who disagree with Sanders's focus on class over race. Still, the population of shitty people on the internet is hardly limited to those who support Bernie Sanders. The question is, will this hurt his chances at winning the nomination?

Hard to say. For one, Sanders, at this point, appears to have the most popular support and media momentum. He's got 21 delegates, which puts him second to Mayor Pete by one point, and, clearly, he's doing well in the race. But his online advocates can be a very serious turn-off—especially, to me, when they declare that if Bernie Sanders doesn't win the nomination, they will sit the general election out.

I see this many times a day on the internet, among both strangers and friends. It feels like they are holding the election hostage, and it could deliver Trump a second win. It's happened before: Twelve percent of Sanders supporters voted for Donald Trump in the 2016 general election. Who knows who many decided to sit it out? This refusal to play the game, to hold your nose and check a ballot, to vote for the lesser of two evils, certainly helped Donald Trump take the White House. I won't personally be choosing my candidate based on the behavior of his or her supporters, but voters are not always rational. For many people, policy matters less than personality; reason matters less than whose followers you hate.

Bernie Sanders, however, seems to understand that his victory is less important than someone, anyone, beating Donald Trump. "I've said many times, if I don't win this thing, I'm going to support somebody else who wins it," he said in Nevada on Tuesday. That's the message I hope the bros, and all voters, start to get.

Welp, I guess it's time to start playing Skyrim.