Is It Time to Start Panicking About Coronavirus? 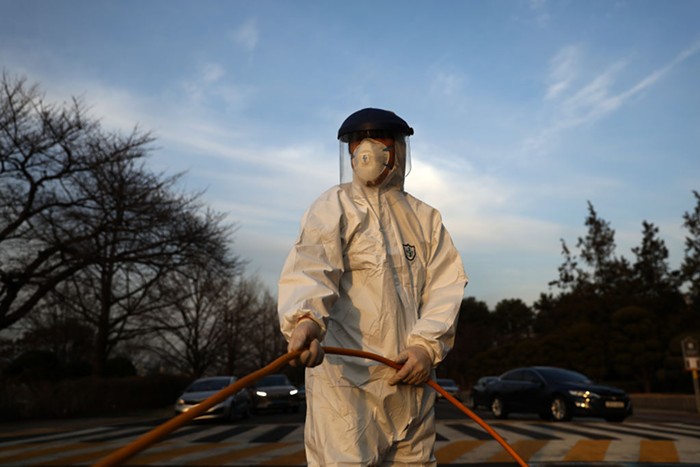 You probably don't need a suit like this... yet. Chung Sung-Jun/Getty Images
Panic about coronavirus spreads faster than the virus does.
Sponsored

There’s a New Way to Help Stop the Spread of Covid-19. Your phone.
WA Notify can alert you if you have been near someone who later tests positive for COVID.

It's not hard to see why this particular disease is turning otherwise normal people into the cast of Doomsday Preppers: As of Monday, the virus has sickened nearly 80,000 people, starting in Wuhan, China, and spreading outward. In South Korea, there are at least 830 cases, including eight deaths. In Italy, there are over 200 cases, and authorities have locked down 10 towns with a combined population of 50,000. At least 60 people have tested positive in Iran, 12 have died, and in the U.S., there are at least 53 confirmed cases. And while the numbers outside of China may seem relatively low compared to the populations, the casualties don't reflect the total picture, because this illness won't just impact those who catch it. Indeed, it could impact the entire global economy.

We're already seeing the downstream effects of this crisis here in Seattle.

Tayor Shellfish, for instance, announced to its employees last week that due to declining orders from mainland China and Hong Kong, the company is temporarily eliminating 40 positions as well as suspending its matching 401K program for the year. They've also cut pay for upper management by 10 percent and for members of the Taylor family by 20 percent.

It's not just businesses exporting to Asia that will be impacted: The stock market tumbled to its lowest level since August on Monday, which means everyone's 401K, not just the employees of Taylor Shellfish, is taking a hit.

So is it time to start panicking? No. Don't panic. Panic doesn't help anyone and it tends to make things much worse. But considering how intertwined global markets are, it's likely we'll see some shortages of some products. Axios reported on Sunday that about 150 prescription drugs that are manufactured in China are at risk, and this could impact patients whether or not the virus becomes an epidemic in the U.S.

Tech companies are feeling the repercussions as well. Amazon, for instance, is one of a growing number of tech companies—including Microsoft, Facebook, Google, and Apple—that have banned or limited employee travel to China, and Apple and Nintendo have both announced possible shortages for their products.

Still, unless your Nintendo Switch controls your insulin pump, this is not a reason to panic, if for no other reason than because it's the panic, not the disease, that can lead to shortages of food and other goods. But even if it's not time to panic (and it's not) this crisis is a good reminder that the world is so intertwined that a viral outbreak or some other disaster in China or Iran or South Korea can have impacts far beyond that country's borders.

And so, while I am commanding you not to panic (seriously, don't panic), it would not be a bad idea to stock up on food and other supplies for this or any other kind of disaster. Keeping a three-year supply of food and water might not be possible if you live in an apodment, but it will not hurt to pick up a few extra days worth of food the next time you're at the grocery (and if your really limited on space, there's always nutritional pellets, which tends to taste like dry hay but will keep you full in a pinch).

For those with space to spare, stock up. I'm probably on the paranoid side of things (decades of waking and baking will do that to you) but the first thing I did after moving into a house with a basement last year was get a Costco membership. Now, every few months, I stock up on canned goods (beans, tomato sauce, tuna), dried goods (pasta, rice, nuts), cooking oil, dog food (both for the dog and for the very end when we run out of everything else), bleach, toilet paper, soap, and lots and lots of coffee, tea, and weed. Then, I actually use the shit up (even canned foods go bad) and restock as I run out. This saves me from more frequent trips to the grocery store and it gives me peace of mind in times like this.

So if you're not panicking but maybe kind of panicking a little, stop. Take a big breath. Go do a yoga. And then, the next time you're at the store, throw a few more cans in the basket, stock up on any necessary medications, and remind yourself that this isn't panic; it's prep.

Three veterinarian-recommended tips to help your pets
overcome situational anxiety and other stressors this holiday season.
The Stranger depends on your continuing support to provide articles like this one. In return, we pledge our ongoing commitment to truthful, progressive journalism and serving our community. So if you’re able, please consider a small recurring contribution. Thank you—you are appreciated!
CONTRIBUTE NOW

So is Angels in the Outfield.