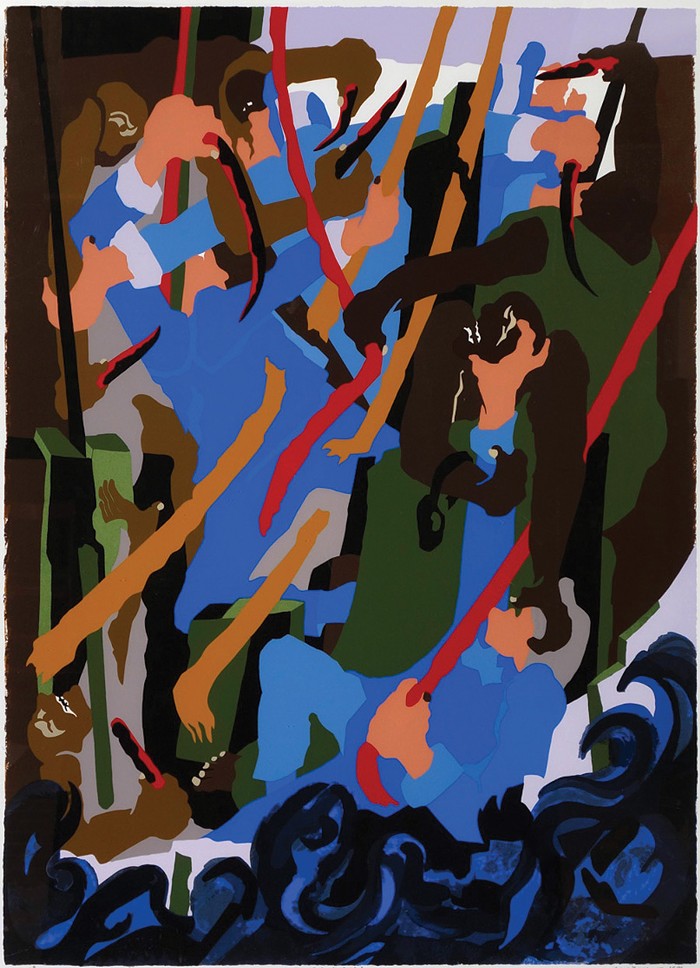 Jacob Lawrence's "Revolt on the Amistad" at Greg Kucera Gallery Courtesy of Greg Kucera Gallery
This week, you must go see Jacob Lawrence at Greg Kucera Gallery. It closes on Saturday. Featuring 50 works from the famed modernist artist and beloved Seattleite, it's probably one of the most comprehensive looks at Lawrence's work you're likely to see here in the city at this time (and for free, I might add). The exhibition includes 12 paintings, watercolors, colored pencil drawings as well as 38 prints from some of Lawrence's best-known series looking at Black historical events and subjects—The Legend of John Brown, The Life of Toussaint L'Ouverture suite, the Builders series, as well as individual prints. All are incredible and should be seen in real life.

One of the prints that moved me most in the show was one I had never seen before: "Revolt on the Amistad." When looking at it from afar, the jumble of scraggly blocks of color almost looks abstract—peach, black, green, and blue all layered on top of one another. But a closer look reveals bloody knives, shackles, toes, grimaces, and the violent sea.

The 1989 print is, of course, depicting the famous 1839 revolt of the enslaved Africans on the Spanish ship La Amistad. While the issue of these Africans' freedom would be meted out in court (a landmark case which they won), Lawrence instead focuses on the violence that preceded the legal issue where the 53 enslaved people murdered nearly every Spanish slaver on board. Lawrence recognized the importance of violence to Black history and Black liberation.

Though "Revolt" isn't bombastic in its depiction of the revolt aboard the deck of the ship, it's still full of emotion and struggle, a representation of the determination and will of enslaved people to resist their condition. Those Africans aboard La Amistad were not just fighting for their own personal freedom, but—in many ways—the freedom of those enslaved across the Western hemisphere.

Perhaps just as good as the print is a statement about the piece by Lawrence himself, written in his squiggly script: "Through color, texture, value and line, I have attempted to show the powerful drive for freedom that is inherent in all of us at cost." A simple—yet profound—explanation for the ability of art to speak culture and soul. 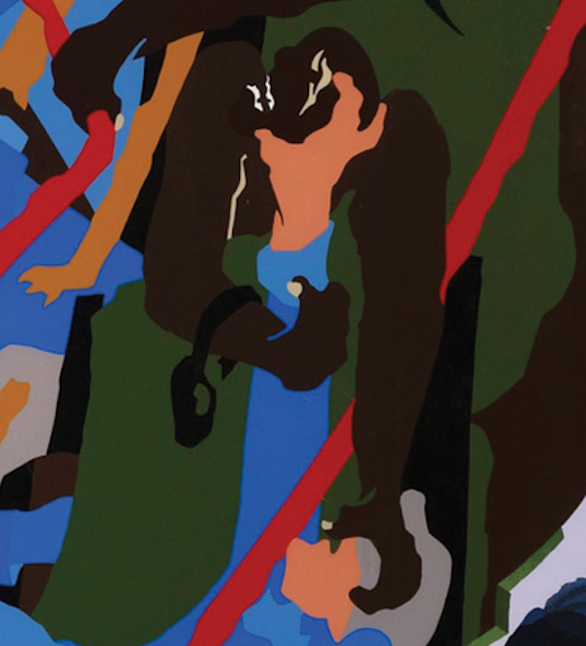 Detail from "Revolt on the Amistad." Courtesy of Greg Kucera Gallery
The Stranger depends on your continuing support to provide articles like this one. In return, we pledge our ongoing commitment to truthful, progressive journalism and serving our community. So if you’re able, please consider a small recurring contribution. Thank you—you are appreciated!
CONTRIBUTE NOW