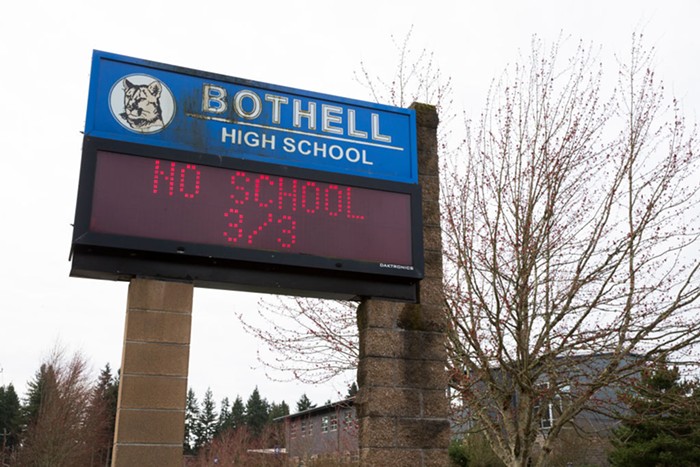 Bothell High was closed for deep cleaning this week after an employee was potentially exposed to COVID-19. Karen Ducey/Getty Images
The nearly 24,000 students in one in Puget Sound school district will be staying home for up to the next two weeks in response to the local COVID-19 outbreak, which has killed thousands globally and at least 10 in Washington state.

In a letter sent to parents Wednesday, Northshore School District Superintendent Michelle Reid said that all schools will be closed as of March 5 and classes will begin being held online as of March 9. Two schools in the district—Bothell High and Frank Love Elementary—were closed for deep cleaning earlier this week after employees or family members of employees were potentially exposed to the novel coronavirus. A parent/volunteer at Woodmoor Elementary School has tested positive for the virus as well. In all, according to Reid, 26 schools have been affected by exposure, either directly or indirectly.

In her letter, Reid noted that while young people are not a high-risk population for COVID-19, they are also concerned about faculty and staff, over 500 of whom are over the age of 60.

"Let me be clear," Hayes wrote to parents. "Education is a service to which our district is resolutely committed. It is not a place. To that end, we are shifting our education from the classroom with four walls to the cloud. We are taking this strategic approach not because we think by doing so, we will stop an epidemic; we are simply trying to do our part to slow the spread of COVID-19."

The plan to continue educating students is to hold classes online. Both teachers and students were trained this week on the online platforms that will be replacing traditional in-person education. If families don't have access to an appropriate device, they will given one on loan from the district. If they don't have access to internet, they will be provided with a wifi hotspot.

Hayes acknowledged the burden this will put on families who need childcare. "This transition may put considerable strain on some families of elementary-age students who must continue their regular routines and do not have daycare options for their students," she wrote. "I have staff working on a plan for developing student support centers. The feasibility and logistics are still under development." The district is also making arrangements to accommodate the nearly 15 percent of Northshore students who qualify for free or reduced lunch so they do not go hungry.

While the Northshore District may have been particularly hard-hit by this first wave of the virus, other districts may soon find themselves making similar contingency plans. Washington state officials are leaving closures up to individual schools and districts, but according to the United Nations, schools in 22 countries and on three continents have closed because of the virus, impacting an estimated 290 million students worldwide.