Who Should Scan Our Faces at the Airport? 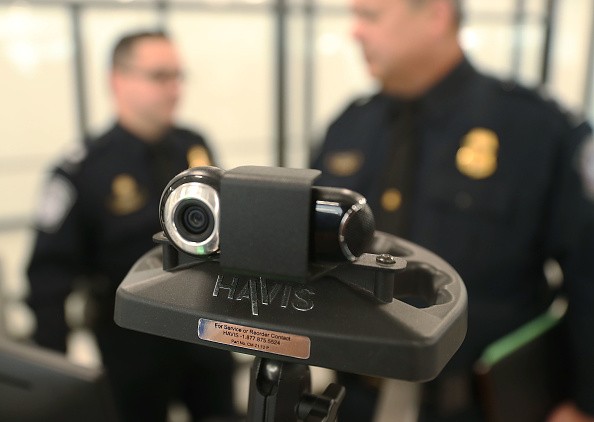 Get ready to get face-scanned, friends. Joe Raedle / GETTY IMAGES

Today at noon the port commission will decide whether or not they want to start buying and installing face scanners at airport gates for use on outbound international travelers.

Whether or not the face-scanning will happen at all at SeaTac has already been decided. The 9/11 commission and language in the Muslim ban directs Customs and Border Protection (CBP) to complete "a biometric entry and exit data system as expeditiously as possible" for non-citizens, and they've already worked with the SeaTac to buy face-scanning stuff for the gates at the new International Arrivals Facility that's opening in July. Moreover, SeaTac is already using biometrics in some capacities, which sucks.

Surveillance watchdogs, oversight groups, and lawmakers also agree that airports across the country, including SeaTac, will eventually expand this face-scanning infrastructure to snap photos of passengers arriving and departing on domestic flights, too.

Still, a vital question remains: who do we want to do the face-scanning? Airline companies? CBP? Or the Port of Seattle? The port's level of complicity with CPB's scheme will dominate the conversation at the meeting later today, which I encourage you to watch during lunch. Be sure to leave a comment on the proposal when you're nice and caffeinated. Update: They voted for the port to handle it.

The Argument for Letting the Airlines Do It

According to the Port, CBP uses facial biometrics at 20 U.S. airports, including "Atlanta, Dulles, Ft. Lauderdale, Houston, JFK, Las Vegas, LAX, Miami, Orlando, San Diego, and San Jose." Delta runs it at Hartsfield-Jackson International Airport in Atlanta, and "JetBlue, British Airways and Lufthansa, are running biometric pilot programs of their own," too, according to NBC.

Since airlines have experience running these programs, the whole process may end up being more efficient if we let them do it. However, since each airline has its own system, things might get more complicated and airports might lose any gained efficiencies. Moreover, airlines, of course, cannot wait to collect all this data, and having them run the show would make that easier, which would suck. And why should we be allowing businesses to reap benefits from what should be a government function?

The Argument for Letting the Port Do It

The reason you'd want the Port of Seattle to be complicit in CBP's effort to scan faces and potentially speed up lines at the airport is to put an administrative buffer between us and the border cops.

Late last year the port approved a resolution establishing some nice-sounding guidelines for use of biometric technology, requiring any proposed system to be "voluntary, private, equitable, transparent, lawful, ethical, and justified."

Right now, for instance, both U.S. citizens and foreign travelers can opt out of using facial recognition systems. But that's not clear to 98% of people, as airlines currently report a 2% opt out rate.

If we put the port in charge of scanning faces, they believe they'd have the authority to post big, clear signs in many languages informing people of their right to opt out. Plus, they could train staff in ways that align with their nice-sounding value statements, which might reduce privacy invasions and increase transparency.

Finally, at port meetings last fall, CBP admitted that forcing only their agency to scan our faces would stretch their human resources, which may diminish their ability to process people efficiently. Having the port facilitate the process might make things go more smoothly, which is one of the stated reasons for using biometrics in the first place.

The Argument for Making CBP Do It

Placing an administrative buffer between us and the border cops could help in all the little ways I mentioned above, or it could only serve as a way to put a nicer face on processes CBP is just going to essentially control anyway.

For instance, the port may believe it can place big-ass "know-your-rights signs" everywhere in an effort to let people know they can opt out of face scanning, but CBP's "Biometric Air Exit Business Requirements" require all "airlines and airport authorities" who agree to participate with the agency to "ensure that CBP-approved signage is posted at each gate location." So if they want to post signs, they'll have to run those by CBP first.

And privacy advocates argue the port hasn't inspired any confidence that they'd serve as much of a buffer in the first place. The ACLU and others point to the fact that the port issued requests for proposals to biometric firms that included "a letter of commitment to deploy a permanent biometric system for departing international flights" last January, before the port commission's advisory groups weighed in on whether to install those biometric systems at all.

Though CBP is going to get its face scans one way or another, the port does not have to facilitate that process. Forcing CBP to do its own dirty work on its own dime might lead to a more inefficient process, but at least travelers would have no illusions about who is surveilling them, who is responsible for the data they collect, and who to turn to for redress.