Did the Olympia Protest Against Social Distancing Violate Facebook's Policies? 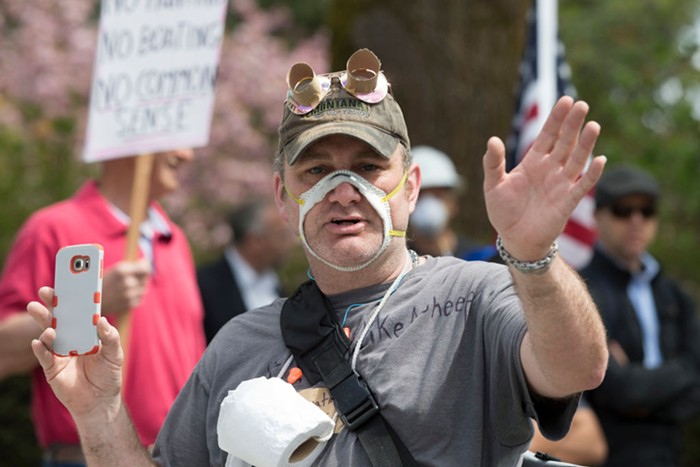 A protester at Sunday's rally in Olympia. The event was organized on Facebook, which prohibits events that "defy" social distancing requirements. Karen Ducey / Stringer
On Sunday, more than 2,000 people showed up in Olympia to protest Governor Jay Inslee's "Stay Home, Stay Healthy" policy, which was enacted in March to slow the deadly spread of COVID-19.

Nearly 1,000 followers of the "Liberty, At All Hazards" Facebook page, for example, marked themselves as having attended Sunday's event. That Facebook page is associated with protest organizer Tyler Miller, a board member for the Kitsap County Republican Party.

Today, in response to news that kindred protests in other states "are being engineered by a network of conservative activists" using Facebook groups, Facebook spokesperson Andy Stone told The Washington Post: “Unless government prohibits the event during this time, we allow it to be organized on Facebook. For this same reason, events that defy government’s guidance on social distancing aren’t allowed on Facebook."

"Yes," said Inslee spokesperson Mike Faulk in an e-mail to The Stranger. "Sunday’s protest was in violation of the 'Stay Home, Stay Healthy' proclamation."

Others have made the same observation. As The New York Times reported from Olympia, "Few attendees wore masks, and many gathered tightly around speakers against the guidance of public health officials who recommend a six-foot distance to limit the spread of the virus."

Given this, is the "Liberty, At All Hazards" Facebook page in violation of Facebook's policies, since the page promoted an event that ended up defying "government's guidance on social distancing"?

Will the page be allowed to continue to promote similar events?

Stone, the Facebook spokesperson, told The Stranger earlier this afternoon that the company is looking into this question.

Miller, the protest organizer, didn't respond to an e-mail sent to him at his Kitsap County Republican Party address or to a Facebook message sent through the "Liberty, At All Hazards" Facebook page.

The pre-protest invite posted by "Liberty, At All Hazards"—the one that led to nearly 1,000 self-reported attendees—did contain this major disclaimer: "I am NOT calling on people to be dismissive of the threat that the virus poses. I am NOT asking people to disregard the recommendations of the CDC and other health professionals."

But, at the same time, the invite text addressed Inslee directly and demanded the governor "immediately rescind your stay at home Proclamation and revise all of your other proclamations in this crises to acknowledge and reflect the fact that you have no authority whatsoever to place restrictions on the constitutional freedoms of the citizens of Washington State. Unless and until you do, I will continue to call for these protests and for them to grow."

So the "Liberty, At All Hazards" Facebook page organized a protest in Olympia that it said shouldn't disregard social distancing requirements. But, according to Governor Inslee's office and media reports, the protest did end up defying Inslee's "Stay Home, Stay Healthy" order.

In addition, "Liberty, At All Hazards" promises it will continue to "call for these protests and for them to grow." The page is currently promoting upcoming events in Yakima and Richland this month.

What happens next? We'll update this post if we hear more from Miller or Facebook about the present and future of "Liberty, At All Hazards." Inslee spokesperson Mike Faulk said the governor's office "would politely suggest" that Facebook enforce its policies.

UPDATE, 5:51 pm: Facebook spokesperson Andy Stone confirmed that "several" of the events promoted by the "Liberty, At All Hazards" page "do violate" Facebook policy and as a result "have been removed."

It appears those include events set for later this month in Yakima and Richland.

Reached by phone, Tyler Miller confirmed that he runs the "Liberty, At All Hazards" page and lamented that "as far as I know, [Facebook] invented this policy today."

But Miller conceded that if Facebook wants to keep its platform from being used to promote "events that defy government’s guidance on social distancing," then it has a right to do that. “I think that private business should be able to regulate itself all it wants to," Miller said.

He added that Facebook is correct to view his promoted events as belonging in the "defy government's guidance" category. “I think Facebook’s right," Miller said, "about how they are interpreting their own policy."