In Seattle, Good Reviews (So Far) for Closing Streets to Help Social Distancing 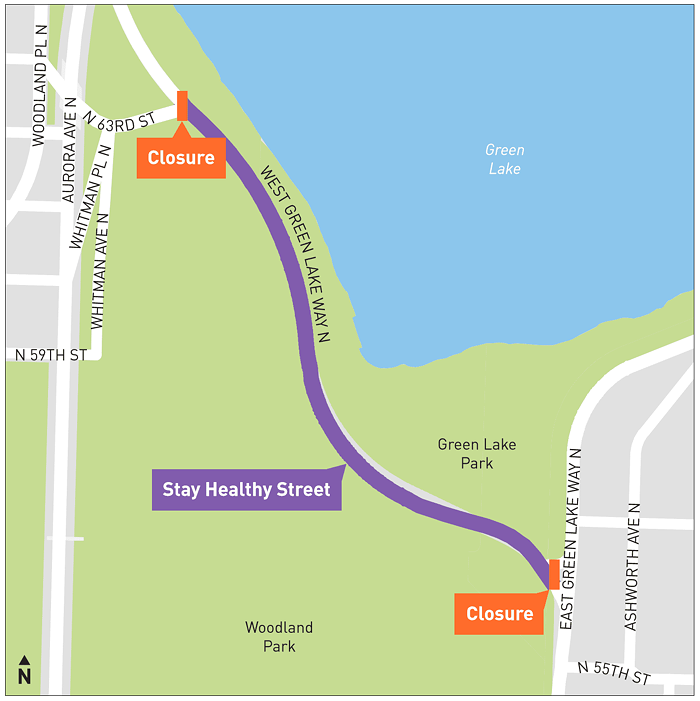 This road closure near Green Lake is part of nine miles of Seattle streets that were opened to human-powered movement over the weekend. Seattle Department of Transportation
Like other cities around the country, Seattle is now running an experiment in closing streets to car traffic so that humans can have more space to socially distance while walking, running, biking, skating, and scooting.

It's not the 40 miles of streets that New York City is closing to cars, but over the weekend Seattle "opened" (to use the city's preferred term) nine miles of residential roadways for people-powered movement.

That's up from only 2.5 miles of "Stay Healthy Streets" that were opened in Seattle over the weekend of April 16 after weeks of concerns about overcrowded parks and sidewalks, along with calls from pedestrian and bike advocacy groups for doing something productive with all the empty roadways during this pandemic.

I think about this a lot as I watch people try and socially distance on narrow sidewalks, or get honked at if they walk in the street. https://t.co/HrHH4Bazdb
— Ezra Klein (@ezraklein) April 26, 2020

So how did it go closing nine miles of Seattle roads—from Rainier Beach to Greenwood—over this past weekend?

As the Seattle Bike Blog has noted, "It’s hard to say what success looks like for this program. You want people to use them, of course, but you also don’t want them to get crowded."

These "Stay Healthy Streets" also need to involve a minimal investment of city workers' time and energy, given the overwhelming demands of the COVID-19 crisis.

The administration of Seattle Mayor Jenny Durkan has promised ongoing evaluations of the initiative. But while they work on those, the evaluations on Twitter have been pretty positive:

The #StayHealthyStreets in the CD has been a huge success so far! It’s never crowded, but every few minutes you’ll see an elder walking, a couple running, a family walking their dogs, or kids biking in the street. Can’t wait for citywide expansion. Thanks @MayorJenny @seattledot! pic.twitter.com/fEdZNho2MQ

We had a nice Mandatory Fun ride on the @RVGreenways safe streets last night. Finished it off with some snacks from Mama Sambusa cart at Rainier/Wabash/Rose. #SEAbikes pic.twitter.com/cR8IRsC5EN
— Patrick (@pkonthebike) April 26, 2020

The Beacon Hill #StayHealthyStreets were a big hit this weekend with families! Thank you @MayorJenny and @seattledot.

And of course, people have suggestions for additional streets:

If you want to offer your suggestions for other "Stay Health Streets" to Seattle Neighborhood Greenways—a citizens group that pushed for street closures—you can do that right here.

The City of Seattle says it's aiming for "approximately 15 miles" of streets being turned over to human-powered activity in the coming weeks, and as The New York Times editorial board recently asked: "Has there ever been a better time to experiment with street closures?"