We're celebrating Pride this year by selling our popular Pride t-shirt! Buy them RIGHT HERE!
The Stranger has celebrated Pride since its godforsaken inception. Our yearly Queer Issue, one of our longtime favorites, has featured Jinkx Monsoon on RuPaul, Justin Vivian Bond on the t-word, and Edmund White on getting peed on. Last summer, staff writer Jasmyne Keimig highlighted burlesque performer Briq House (you can call her "Goddess"). Here's a cute picture of all of us: 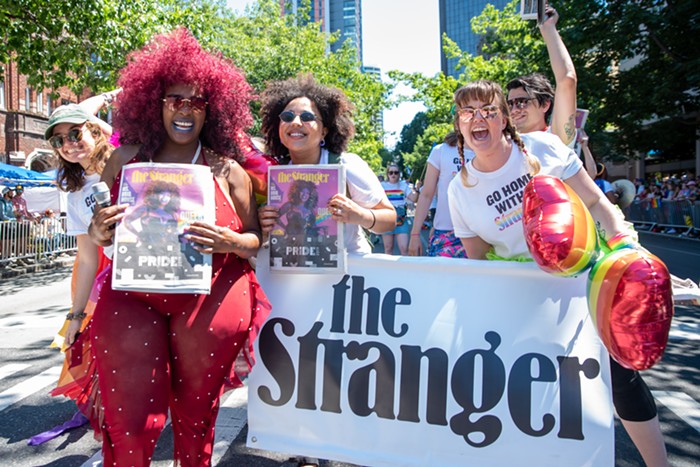 To celebrate popping our Pride Parade cherry, we asked Seattle-area queens Beau Degas, Miss Texas 1988, and Juan Keyai to join us on the parade route. We also made a very limited number of t-shirts to wear for the parade, with a fun design illustrated by Rachelle Abellar.

Three queens, Juan Keyai (left), Miss Texas 1988 (center right), and Beau Degas (right), and me, wearing our original custom t-shirt. This year, we updated the design and t-shirt quality! Timothy Kenney
We received tons of requests from readers who wanted to buy these shirts, and now—!!!—the world has a rare two-week opportunity to snag them. They're the perfect thing to wear to a digital Pride party.

Let's get a closer look at that image...

Our new t-shirts feature this design on the front and run for $25. They come in every size, from extra small to 3XL, and are super soft—100% cotton! You can order them for the next two weeks (from May 11 to 25) by CLICKING HERE. Your purchase supports all of us at The Stranger and helps make sure we can keep pumping out great queer writing.

Now let's meet some of these queens: 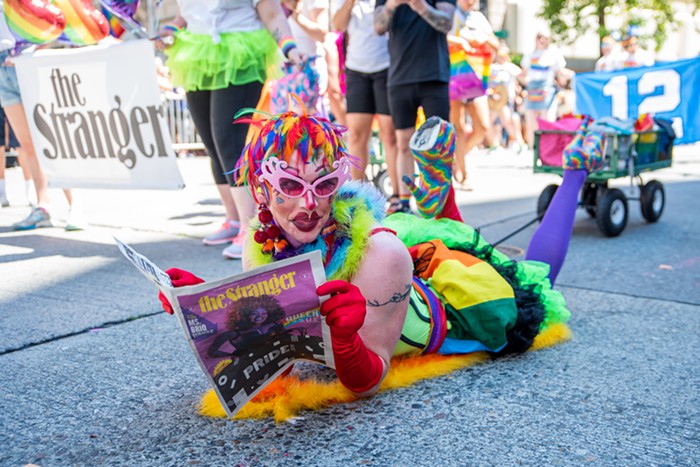 Miss Texas 1988 during last year's Pride Parade. Those were nicer, more unhygienic times. Timothy Kenney
Miss Texas 1988 is a familiar funny face to Slog readers. Texas and I have known each other for a decade; we met when we both lived in the same dorm together in Minneapolis (the tea is that Miss Texas hails from rural Minnesota and has never even been to Texas). She's been busy since moving to Seattle. After a fierce competition, she was named Critter Person 2018. She won R Place's "So You Think You Can Drag" competition in 2019. And she is a renowned defeatee of the Bacon Strip Unpageant.

Texas recently made a silly Message to the City for The Stranger. I keep thinking about the unique way she gardens. Watch:

The next queen on the shirt is Juan Keyai, who was originally a Bellingham-based queen but is now a fresh Chicagoan.


I first saw Juan Keyai performing in the Timbre Room dressed as a cow to the song "La Vaca." I don't think I've ever seen something more unhinged or funny. I'm now a diehard Juan Keyai fan, and I hope she gets on Drag Race one day, even though she'll probably end up representing Chicago and not the PNW.

You like my hair? Gee, thanks, just bought it. 💇🏽‍♀️: @kara.sutra Makeup inspired by @natureofwitch

Before this pandemic, you could catch Beau Degas performing with Miss Texas (and Betty Wetter, among others) at the regularly sold-out TUSH at Clock-Out Lounge. They're still hosting digital shows in light of social distancing, but you should also check out Beau's impressive makeup project she's completed on her Instagram, where she paints her face like other local drag queens.

Here she is doing Cranberry, one of my favorite not-quite-21 queens in Seattle.

CRANBERRY • Next up is the performer who’s coming for my gig in every way. Her makeup is spectacular, she can construct, her lip sync is solid, she brings concepts, she’s humble, and she’s not even drinking age yet (me too we have that in common). I am constantly in awe of this one—this is Cranberry! @sheiscranberry 🧡 Headpiece: @sheiscranberry • • If you like the pic and want to support an artist, consider throwing some cash at Cranberry— Venmo @sheiscranberry

Now that you know the queens, what are you waiting for? GET A SHIRT and feel good about supporting The Stranger.