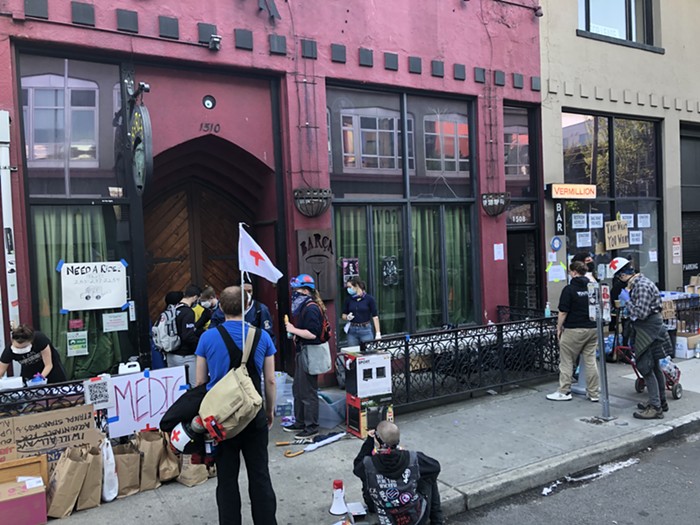 The operation at Vermillion. RS
On Tuesday, Carolyn Hitt asked her boss if she could hand out water to the demonstrators protesting police brutality on 11th and Pine, just a block down the street from Vermillion Art Gallery and Bar, where Hitt works as a bartender. Diana Adams, who owns the venue, said "Sure, no problem." 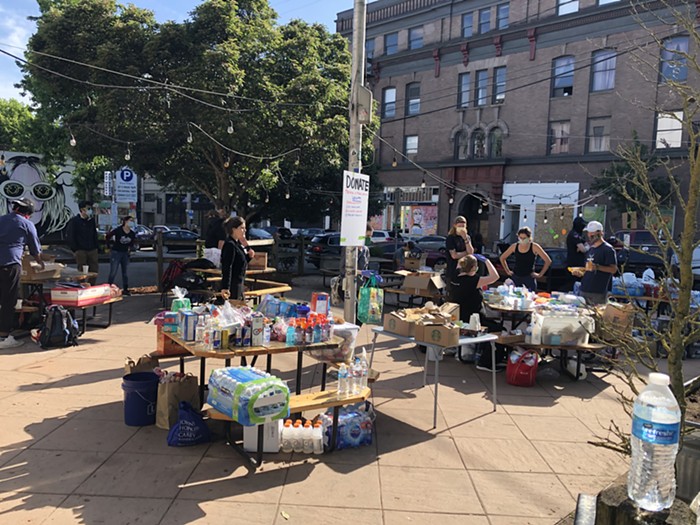 The scene at Rancho Bs on Thursday afternoon. RS
Volunteer medics and organizers show up to Vermillion around 10:00 a.m. to start setting up outposts with foodstuffs and other supplies in Cal Anderson Park and other locations. A core group of about a dozen people run the operation, but overall about 45 or 50 volunteers come and go throughout the day. They work until about 11:00 p.m., allowing one or two people to use the restroom at a time, and only three managing stuff in the building. "We want to make sure everybody's safe," Adams said. "But there’s so many things we have to work around."

Vermillion also serves as a hub for many donation streams. Adams said they're fine on food, and urged those who want to support the effort to donate to Black Lives Matter Seattle-King County and "every arts organization you can think of. This is all because of artists," she said.

Signs taped the window show Venmo handles for @vermillionarts, @blueconestudios, @tracy-rector-art, @studio-current. Chai Adera, an artist and one of protest's most dedicated livestreamers, uses the bar as home base for his operations, too. His PayPal is 1futurecrystals1. 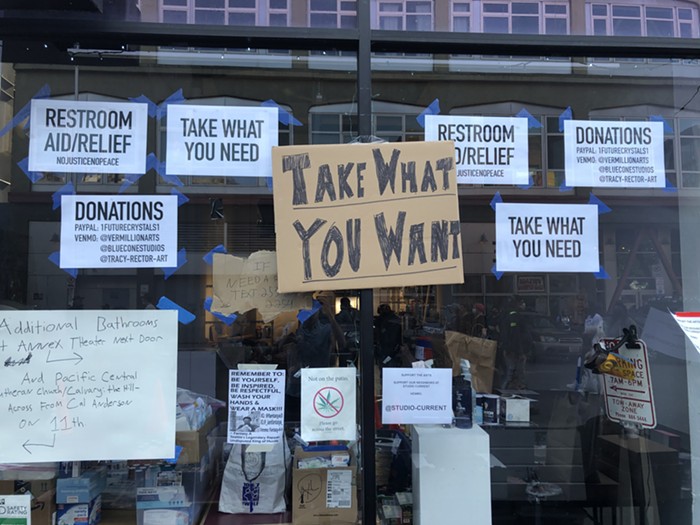 Other suggestions include the COVID-19 Artist Trust Relief Fund and COVID-19 Arts Emergency Relief Fund from ArtsFund. RS
Like every other art gallery and/or bar in Seattle, Vermillion has taken a massive financial hit due to COVID-related closures. Adams said she's been using her unemployment money to pay the bar's rent, which her landlord slightly reduced. "I'm not paying 100%, but I'm not paying 50% either," she said. "And everything has gone up—the insurance went up, my rent goes up every year." Donations to @vermillionarts, which has long served as a refuge and watering hole for artists, activists, and some members of the BIPOC LGBTQ community, will be used to keep the lights on.

Nevertheless, Adams said she doesn't really "live large," and she's optimistic about the future. "We're going to go forward in one way or another," she added.

As demonstrations stretched into their eighth day, similar efforts to lift spirits and support protesters have sprung up in the park. 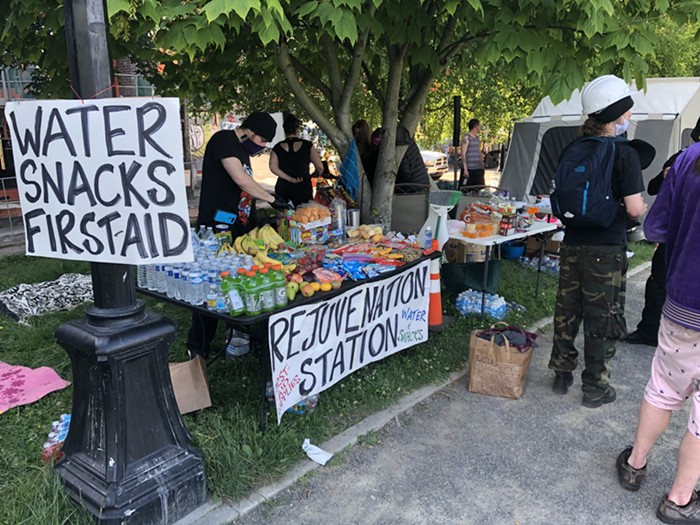 Gotta stay hydrated. RS
Just before last night's protest, Boobie, who has been throwing parties with Family Night Seattle for over a decade, was refreshing the tables at the Rejuvenation Station near the fountain in Cal Anderson. The new Run the Jewels record, which was released for free on Wednesday, blasted out of a professional speaker system. A couple passersby paused to dance beneath the shade of trees.

Boobie said he and his crew have been camping out in the park 24/7 since Tuesday, offering water, fresh fruits, snacks, milk to clear the eyes of pepper spray victims, and sick beats to all.

The goal is to provide a space for people to chill out, clear their heads, and support the demonstrators "so we can do this until we don’t have to," he said.

The music is loud, and has drawn complaints from some who live in the area. In response to music he was playing early Thursday morning, Boobie said he took shit from four "absolutely livid human beings" who were all under the age of 40, all white, and all with dogs and collared shirts. "I was like, man, it must be nice that this is your biggest problem right now. If you want to be mad at somebody, be mad at why I have to do this. I don’t want to be sleeping here," he said.

He's also had two interactions with the Seattle Police Department, both "surprisingly amazing." One was early Thursday morning, when an officer drove by really slowly, then stopped, backed up, and rolled down his window to address Boobie. "Hey!" the cop said. "What kind of equipment are you using. I have the CDJ 1000."

"Man, these are the Nexus 2!" Boobie replied. "Why do you have the 1000s?" The two talked about the benefits and disadvantages of the sound systems for a while before the cop eventually went on his way.

"I’m trying to use my privilege to the best of my abilities right now," Boobie, who is white, added. "I’m here as a barrier so my brothers and sisters can do what they need to fight for justice."

Steven Howeth, a 22-year-old caregiver from Oklahoma, has been working the rejuvenation station since Tuesday. He says several homeless people have stopped by for sustenance and company. "I tell ya, I threw away 200 needles today," he said. "Dude gave me his bag and said go dump it for me. I went and dumped it, and we got the park people to go take the trash bag out, and the needles are no longer here. He went to the shelter in Redmond to get his AIDS medication, and said he'd be back later this evening."

Esther Hubbell has been coordinating donations for the tent, and offered her Venmo as @EstherHubbell. She said any money sent to her will "go to support protesters and the surrounding community." She and Boobie hope the mutual aid community in the park can keep growing.

"We got music, we got love, we got people, and we got peace," Boobie said.