Seattle Says Only SWAT Can Use Tear Gas For 30 Days Cloud City, but in this case the clouds are tear gas clouds and not Google's campus. Nathalie Graham
For the next 30 days, at least, the Seattle Police Department will not be allowed to use tear gas, or CS gas, as the police call it. The SWAT team can still use tear gas, however, but only if authorized by SPD Police Chief Carmen Best or someone she has designated to issue the order.

According to the recommendation, there is no "department-wide policy guidance or training on the use of CS gas by SPD," and the "SPD manual does not reference the use of CS gas nor the conditions under which it can be used for general crowd control." The SWAT team, however, has proper training, so they can still gas protesters "to protect life and end standoff situations," Best said during a press conference on Friday. Vague!

The use of the gas for crowd management purposes will be under review by SPD's accountability partners, aka the organizations that have already offered their opinion that tear gas be banned. So, that seems like a waste of time.

According to Durkan, "Ultimately it will be the federal court that decides" whether tear gas is banned outright.

"If the national experts, community experts, and accountability partners working with the [court] monitor come back with a unified voice the city will be aligned with that," Durkan said.

There is no review currently for the use of flash bangs and pepper spray. However, those were mentioned in an interesting way by Best during the press conference.

According to Best, until last Saturday's downtown "riot," as SPD has described the events on May 30, the department hadn't used tear gas since the World Trade Organization protests of 1999. But, because of "the magnitude of the event" on May 30, SPD found that "blast balls and OC spray (i.e. pepper spray) simply were not proving effective," and SPD "experienced a near-depletion of its supply of those tools."

Okay, so, Best just described that SPD used so many blast balls and so much pepper spray that their only option to prevent Nordstrom from turning to rubble was to use the gas that's been banned in warfare since 1997? Cool. Got it.

"The conditions have now been met and we have our resources back in place and that authorization has been rescinded," Best said.

The Stranger would like to know more about this "near-depletion" and just how low the stocks of blast balls and pepper spray were, because they were definitely used on Monday night. There's video evidence (yes, Durkan, that's in "The Pink Umbrella Video" you keep mentioning)! We've sent a request for a comment, but have yet to hear back.

Best also wouldn't confirm a reporter's question about whether tear gas was used on Monday night. A Stranger writer balked upon hearing that saying, "I've got the tears to prove it." 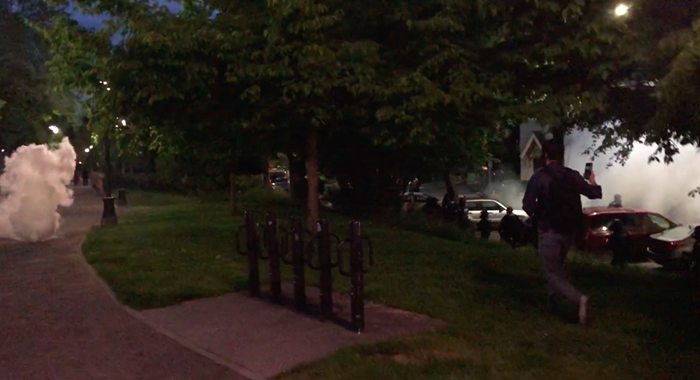 And the photos! RS
Regardless, for the next 30 days, the CPC, OIG, and OPA will be reviewing "all of our crowd control policies and procedures and techniques," Durkan said. During that time, you can only be tear-gassed by a SWAT officer.
Comments 8
Tags: News Cops #SeattleProtest