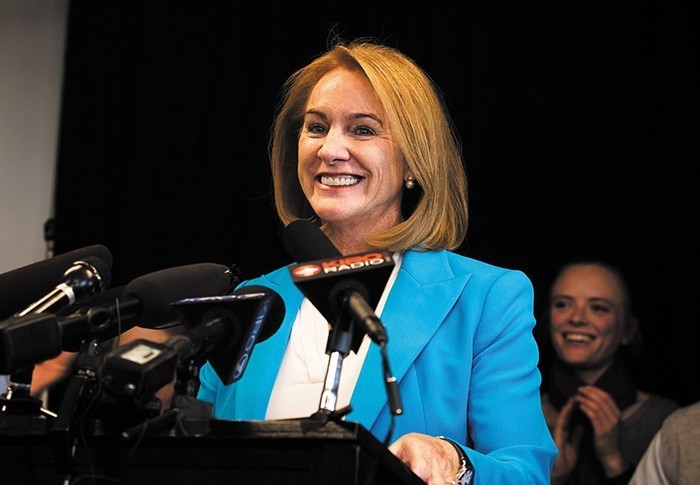 Seattle can have some police changes as a treat. Nate Gowdy
Amidst growing public pressure and calls for Mayor Jenny Durkan's resignation, Durkan and police chief Carmen Best spoke at a press conference on Sunday night. They outlined changes to the Seattle Police Department's protest response and potential changes to SPD's budget.
Sponsored

After a week of protesters calling for Durkan and Best to defund SPD and, at least, alter the way SPD has been responding to demonstrations on Capitol Hill and throughout the city, there might actually be some changes made. How substantial those changes remain to be seen.

Best outlined changes that demonstrators have been calling for all week, like removing riot gear, reducing the number of officers at barriers and in the area of protests, and working "with community members to deploy de-escalation teams."

Durkan said that she will be making an emergency order on Monday instructing officers to turn on their body cameras at all times, despite legitimate privacy concerns. There's more.

"There are broad calls to defund the SPD and invest in community," Durkan said. "We will start by holding off on planned expenditures in technology, weapons, vehicles, and facilities. We can’t continue with spending that was planned under our old police budget until we’ve developed a plan with our community in our new police budget. "

She also committed to finding $100 million in the budget that will fund programs in communities of color and black communities. That money, though, will not be coming from SPD's budget. The cuts to SPD are unclear.

Durkan said that she won't know "how much SPD's budget will be cut" until there's a full review. Durkan's preliminary budget for 2021 will be submitted around September. SPD's 2020 budget is $363 million. Protesters would like to see it halved.

Another topic of discussion was the call for Durkan to resign.

Many other council members have stressed their concerns over SPD's and the mayor's response to demonstrations in the last week. Several of them—Teresa Mosqueda, Lisa Herbold, Andrew Lewis, and Dan Strauss—went to the protest at Capitol Hill last night after SPD's violent afternoon.

Best described the goings-on at Capitol Hill as a "standoff situation at the East precinct like nothing I've ever seen before" and a "dangerous flashpoint for our community members and our officers."

On Saturday, that "stand-off" intensified when protesters and police clashed over the physical barrier separating the groups and how close SPD officers were to protesters. SPD used flash bombs and pepper spray to disperse the crowd—no tear gas was used, Best said. However, tensions were still high. Local elected officials from Seattle City Council members to King County Council members to state representatives came down to the barrier to help deescalate.

Durkan indicated that she believed this was political posturing. She also said that SPD's forceful response "was too quick."

She said, though, that "peace will be met with peace."

Both Best and Durkan repeatedly stressed the fact that there are "bad actors" within the crowds of protesters that are working to "incite violence" with police. According to Durkan, there was an FBI report about a threat to the SPD East Precinct and "other Seattle buildings" yesterday.

"For all those who felt their voice and their message drowned out by a small group of individuals seemingly committed to inciting violence between police and demonstrators," Durkan said, "I am sorry."