Slog AM: A Shooting, a Suspicious Arrest, and an Outraged City Council After Tear-Gas-Filled Weekend

The scene last night at Pine Street and 11th Avenue at 12:15 am. Chase Burns
SPD threw tear gas, blast balls, pepper spray grenades at the crowd last night: As Rich Smith reported in the middle of the night, "Some protesters batted away projectiles with umbrellas, tossed traffic cones, shined laser pointers, and threw bottles and fireworks at police as they fell back. Others stood with their hands raised, bright lights shining in their faces." Watch videos of the action here.

The shooting on 11th Avenue, near Pine: Came a little earlier in the evening, when it was still light outside. "On Sunday evening a man in a black car crashed into a metal barricade on 11th Ave. Demonstrators surrounded the car and started kicking it and punching it. The man appeared to shoot a protester."

Seattle Times has a close-up photo of the shooter: Here.

The protester who was shot in the arm: Said on video after the incident...

Story unclear at the moment but young man shot on 11th and Pine. Daniel, 26, wanted to tell his story. With the help of other medics I got a tourniquet on his arm. Street medics were on the spot with gauze and pressure. He walked off the scene. pic.twitter.com/g9Ism58YkF
— Alex Garland (@AGarlandPhoto) June 8, 2020

City council pissed off at mayor, SPD: "JUST STOP! There is no need to use these dangerous tactics. This is excessive use of force and absolutely unnecessary," Seattle city council member Teresa Mosqueda tweeted at the mayor and the police chief the night before, on Saturday, as things were getting tense. Lorena Gozalez, city council president, tweeted, "We are outraged... this is NOT what de-escalation looks like!"

Later on Saturday night: Council members Mosqueda, Dan Strauss, Andrew Lewis, and Lisa Herbold went to the frontline of the protest themselves to witness what was going on. At approximately 1:50 am, council member Mosqueda said on video: "We have a list of demands and (Mayor Durkan) has not met them. I don’t see another way. We are going to have to make a statement on Monday."

#BREAKING Seattle City Councilmember @CMTMosqueda : “We have a list of demands and (Mayor Durkan) has not met them. I don’t see another way. We are going to have to make a statement on Monday.” pic.twitter.com/8HAjfZOC3e
— Joey Wieser (@itsjosephryan) June 7, 2020

Today's council briefing is at 9:30 am. And you can bet we'll be watching (and you can too).

Shining a laser pointer at cops: That was the official story given for why Evan Hreha was "all of a sudden... surrounded" and arrested on Saturday. Hreha, who's "never been in any trouble before," was the person who shot the video of the kid who'd allegedly been pepper sprayed by cops last weekend. The Stranger was not able to get ahold of Hreha, now that he's locked up, but he told his own mother he didn't have a laser pointer.

If being arrested is retaliation for Evan's videos of public protests: That is very fucked up. Of course, SPD has not responded to The Stranger's request for comment.

"We have been waiting for these days to come, for these people to stream into these streets." So says a Black Lives Matter activist in Los Angeles about the movement we're seeing across the country, in a New York Times story with this sub-headline: "The massive gatherings for racial justice across the country and now the world have achieved a scale and level of momentum not seen in decades."

Stunning news out of Minneapolis: "The Minneapolis City Council on Sunday voted to disband its police department and invest in community-based public safety programs."

Meanwhile in New York City: "We will be moving funding from the NYPD to youth initiatives and social services," the mayor announces.

Meanwhile in Seattle: Mayor Durkan is going to hold off "on planned expenditures in technology, weapons, vehicles, and facilities," she said Sunday. "She also committed to finding $100 million in the budget that will fund programs in communities of color and black communities. That money, though, will not be coming from SPD's budget. The cuts to SPD are unclear," Nathalie Graham reported. 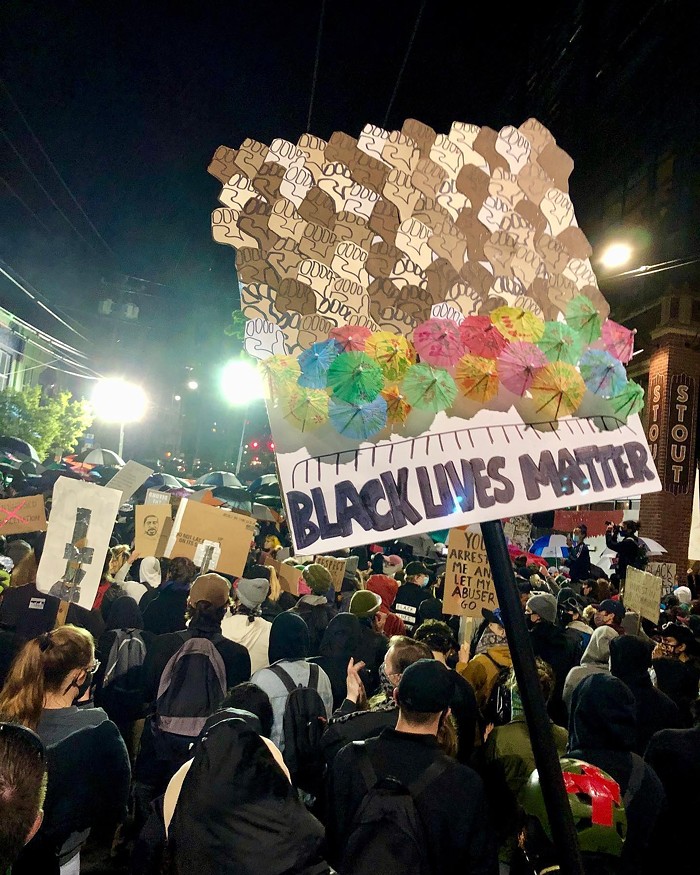 One of the signs seen at Pine and 11th on Saturday and Sunday. Photo by Timothy Rysdyke
Yes, those are cocktail umbrellas stuck to the sign: It took three people about two hours to make this sign. The cocktail umbrellas came from the home section of the QFC on north Broadway.

Former Governor Gary Locke on his unexpected turn as leader of Bellevue College: "I said ‘Whoa, this is not something that was on my radar,’ but given my longtime interest in high education, and I very much enjoy management, I thought I could be of help."

Shopping malls: Started reopening over the weekend, for instance one in Puyallup.

Fewer malls, please, but more buried treasure hunts: A "treasure chest filled with gold, rubies, emeralds and diamonds" hidden in the Rocky Mountains by an art and antiquities collector 10 years ago has finally been discovered. "The poem in my book led him to the precise spot," the old man says. "The treasure, estimated to be worth over $1 million, was a way for [him] to inspire people to explore nature and give hope to people affected by the Great Recession."

"Elegy for George Floyd": A recording of Paul Matthew Moore's original composition for the Silent Reading Party last week will be made available this week on Slog for purchase, and 100 percent of the sales will go to Black Lives Matter Seattle-King County Freedom Fund. You can get your ticket for this week's reading party here.

Speaking of Black Lives Matter Seattle-King County: They have announced plans for a "statewide general strike, march and day of action in support of all black lives on June 12."